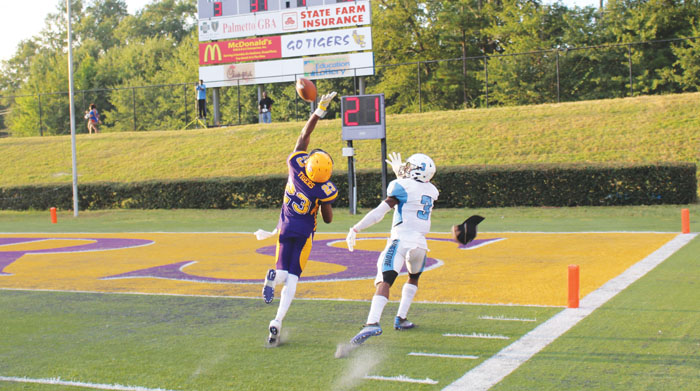 Beginning the season against each other for the third straight year, the Tigers can now claim a two-game winning streak in the series. After Livingstone trounced it in the 2015 classic, Benedict won last year’s defensive struggle, 5-3.

Coach Daryl Williams’ Blue Bears struggled right from the onset, as offensive yards and first downs were virtually non-existent for a quarter and a half.

Benedict had early success running the ball, picking up 64 yards on the first two drives. KaDarius Garrett ran for 42 of those yards, including 33 on one play, leading to the Tigers’ first score.

Quarterback Dominique Harris scored on a sneak with 7:12 left in the first quarter, but the extra point kick was missed.

Again, the Blue Bears found the going very tough early on. Five penalties kept Livingstone backed up near its own goal-line for much of the first quarter.

Benedict sacked Livingstone quarterback Xavier Longerbeam in the end zone for a safety, in the first minute of the second quarter, extending the home team’s lead to 8-0. The safety was essentially set up by a Tigers’ punt, downed at the Blue Bears’ 1-yard line.

One bright spot in the first half was an interception by Livingstone cornerback Gregory Hines. The pick gave the Blue Bears their best field position to that point, at their own 32-yard line. But again, the offense was three-and-out.

On Benedict’s next possession, Harris threw a second straight interception — this time by Livingstone’s Elems Ukwu at his own 39-yard line. But again, another three plays and punt for the Blue Bears’ offense at the 7:26-mark of the first half.

Disaster followed as Hines, fielding a Benedict punt at his own 10-yard line, fumbled the ball into the end zone. After a wild scramble, Raheem Jennings came out of the pile with the ball and a touchdown for the Tigers. Another missed PAT by kicker Derrick Mims left the score at 14-0.

The Blue Bears couldn’t score even when a touchdown was all but assured. Senior running back Jarius Richardson took a pitch-out and galloped 49 yards for an apparent score. However, a blocker slowed Richardson down just a step and Benedict safety Edward Kirkland, came out of nowhere to knock the ball free, before Richardson entered the end zone.

Kirkland’s hustle play was ruled a touchdown back and the half ended soon afterwards with the Blue Bears still scoreless.

Livingstone had 105 total yards in the first half, half of which came on Richardson’s run, and just two first downs. Williams went to the bench early as well, replacing Longerbeam with back-up QB Thaddeus Bell.

Benedict had just 144 yards in the first half, 103 of it coming on the ground. The Tigers, however, owned field position and took advantage of the fumbled Livingstone punt.

The second half began much better for Livingstone. Bell led the Blue Bears on an eight-play, 80-yard drive in 2:23. Bell hit receiver Everett Ransom going down the right sideline for a 31-yard touchdown. Ransom made a great, one-handed catch for the score.

Salisbury’s Justin Ruffin ran for a two-point conversion and suddenly, Livingstone was back in the game at 14-8.

But after pinning the Tigers behind the 20-yard line on the ensuing kickoff, Livingstone’s defense couldn’t keep the new-found momentum.

On the sixth play of the drive, Benedict’s Trini Charlton took a handoff straight up the middle for 60 yards and a back-breaking touchdown. Mims’ PAT made it 21-8.

The TD run for Benedict grabbed the momentum back as Livingstone went back to its three-plays-and-out routine.

The Tigers then put together a decent drive that looked like the game-clincher, but Jennings fumbled and Ukwu recovered at the Livingstone 29. However, after a promising start to the drive, a series of penalties, including an unsportsmanlike, 15-yard call on the sideline, the Blue Bears had to punt.

After that, the Tigers were unstoppable, chewing up the fourth-quarter clock with a balanced mixture of runs and passes. Benedict’s last score was a 16-yard pass play from Harris to tight end Wayne Brown.

Livingstone did get into the end zone one more time, with a minute to go. On fourth down at the Benedict 6-yard line, receiver Ruben Lawhorn scored on a double pass from receiver Spencer Ludin. Kicker John Jones added the extra point.

Bell finished with 67 yards passing, completing six of 12 throws. Richardson led Livingstone on the ground with 72 yards on 10 carries while Ruffin, a former star at Salisbury High School, gained 37 yards on eight attempts. He had a long run of 17 yards.

Livingstone also hurt itself with 13 penalties for 81 yards and two lost fumbles.

The Blue Bears return to action next Saturday with a 1 p.m. game against Kentucky Wesleyan in Owensboro, Ky.