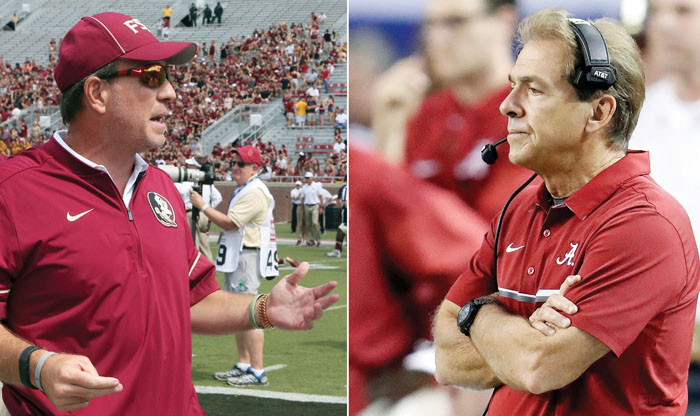 AP Photos/File Florida State head coach Jimbo Fisher, left, and Alabama head coach Nick Saban, right, see their teams going against each other tonight in Atlanta, as the college football season gets in full swing. The result of the Alabama-Florida State could be a topic of conversation all season, especially among the College Football Playoff selection committee.

At a neutral site.

In a brand new stadium, no less.

Top-ranked Alabama, getting started on its annual quest for a national title after having the last one snatched away with 1 second to go, faces Florida State on Saturday night in a season-opening throwdown. It’s the first ever matchup between a pair of top three teams in The Associated Press preseason rankings — that could have an impact all the way through to the day they hand out those coveted playoff invitations.

Certainly, the winner gets a huge gold star on its resume.

Alabama’s Nick Saban did his best to pooh-pooh the significance of the game.

“Look, it’s a long season,” Saban said. “We’re going to have 12, 13, 14 games, maybe 15, I don’t know. What happens in the first game is certainly important, but we’re going to have lots of press conferences in this room and you’re going to ask me the same question when we play the next big game. The only difference is that the next game that we play is going to be the biggest game for me.”

As if a matchup between national championship contenders wasn’t enough to turn up the hype to full blast, this will be the first game that actually counts in Mercedes-Benz Stadium, the $1.5 billion marvel with an enormous, halo-like video board ringing the top of the massive structure.

There’s still the matter of the retractable roof, which isn’t fully functional and therefore will be closed on Saturday, no matter the weather. But that not-so-little glitch is unlikely to dampen the enthusiasm for this game, which will have a whole lot more riding on it that the first two events held in the glitzy stadium — a pair of Atlanta Falcons’ NFL preseason games.

And let’s not forget: This is same place where the national championship game will be held in January.

“I feel like it’s going to make us better in the long run because when teams open with cupcake games or cupcake teams, you don’t really get to see who you are or establish your identity,” Crimson Tide safety Minkah Fitzpatrick said. “But when you play teams like Florida State or Alabama, you can really see who you are.”

While the Crimson Tide came up just shy of its fifth national title under Saban, losing 35-31 to Clemson in a classic championship game that came down to a last-second touchdown pass, the Seminoles are looking to re-establish a bit of their swagger.

A season ago, Florida State was thoroughly embarrassed in a 63-20 rout at Louisville, and lost a pair of home games to North Carolina and Clemson by a total of five points. The national champion in 2013 and a semifinalist the following year in the first College Football Playoff, the Seminoles haven’t been serious title contender the last two seasons.

“This isn’t the only game,” defensive end Josh Sweat said, “but it definitely is a very big game, and everybody knows it is.”

Some things to watch for when Alabama takes on Florida State in the Chick-fil-A Kickoff Game:

JALEN’S ENCORE: Jalen Hurts won the Alabama quarterback job after coming off the bench in last year’s season opener against Southern Cal. There’s no doubt about who’s No. 1 in Tuscaloosa these days. The sophomore is working with a new offensive coordinator, Brian Daboll, and the buzz from players and coaches has been about Hurts’ improved dropback passing, an area he struggled with late last season.

PROTECTING FRANCOIS: Florida State quarterback Deondre Francois was sacked 34 times last season due to a combination of factors — holding on to the ball too long, receivers running wrong routes, offensive line issues. Francois says he has done a better job of being able to read opposing defenses quicker and has a better rapport with Nyquan Murray and Auden Tate, who became the two main receivers. The offensive line also has a set group of starters for the first time in at least three seasons.

GAWKING TIME: Saban and Fisher aren’t the kind of coaches to leave a stone unturned, which includes making sure their players got any “gawking” out of their system during Friday’s walk-throughs at Mercedes-Benz Stadium. Saban said it reminds him of games at AT&T Stadium in Arlington, Texas. “I think mature competitors that have been in situations like this before handle this a lot better than young players,” he said. The walk-throughs also gave players a chance to adjust to the one-of-a-kind halo video board, which could come into their vision on deep passes, as well as fielding kickoffs and punts.

MR. VERSATILITY: Florida State safety Derwin James will be playing in his first game in nearly a year. Besides lining up at safety, the sophomore should see time at linebacker and on the defensive line along with being the punt returner. Fisher has also toyed with the idea of James putting in some time at receiver.

DAVIS’ STATUS: Saban shed little light on the status of Alabama defensive end Raekwon Davis, who suffered a minor injury when he was shot in the leg outside a Tuscaloosa bar last weekend. Davis and Josh Frazier are listed as co-starters. Davis was back at practice by the middle of the week but Saban said the 6-foot-7, 306-pounder remains day to day, calling his availability “a medical decision.”