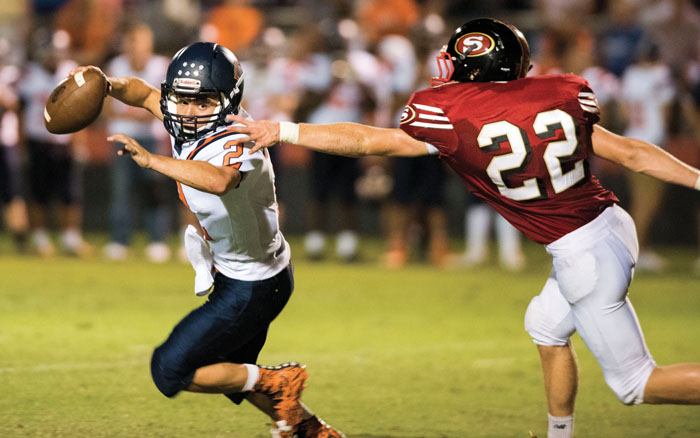 The Cougars’ first-ever match with visiting A.L. Brown quickly turned into a mismatch before disintegrating into a 50-0 non-conference loss.

“We thought we had corrected all those things in practice,” coach Joe Pinyan said after Carson (1-2) turned the ball over four times in the first half. “In practice we looked good. We fixed all the snap problems, the exchanges and all that. Then we went out and fumbled on a play that should have been a 10-yard gain on the very first play.”

It was that kind of night for Carson. Sure, the Cougars drowned against the favored Wonders (2-1), but they also helped fill the pool.

“We didn’t give ourselves a chance,” said hard-nosed quarterback Cole Sifford. “To have a chance against a team as good as Kannapolis, you’ve got to take care of the football and grind it out. We just didn’t do that.”

Instead, they made things easy for the guests. Kannapolis used a short-field advantage to go ahead, 7-0, before the game was two-minutes old. A perfectly placed 80-yard touchdown pass from Jordan Medley to Antonio Knight — just two snaps after Carson’s second giveaway — pushed the lead to 14-0.

“Turnovers made a big difference,” Medley said after passing for 141 yards, all in the first half. “When you start on the other 20-yard line, it’s so much easier to score. I just read the safety on the second touchdown. I saw him go to the wide receiver (teammate Jalen Nixon), which left Antonio wide open.”

Carson’s third first-period fumble laid out another red carpet to the end zone for Kannapolis. This time, Medley steered the Wonders from the Carson 28, fired short completions to Jaran Young, Jr. and Nixon, then handed off to fullback Nick Lyerly for a 5-yard TD burst.

“They were really physical and came at us,” Carson defensive tackle Teolyn Woodruff said after Kannapolis rushed for 230 yards. “But if we hadn’t made a few minor mistakes, we could have stayed in the game a little longer.”

That became less likely on K-town’s next possession — a nine-play, 67-yard pilgrimage capped when junior back Jaron Cooper scored his second touchdown on a 5-yard blast. It gave the Wonders a 27-0 lead midway through the second quarter. The back-breaker for Carson came three minutes later when linebacker Tobias Massey intercepted a Sifford pass and returned it 52 yards for another score.

“When you turn the ball over that much, it makes it tough to win,” said winning coach Mike Newsome. “Especially when we play as solid as we did. We felt like we could come over here and get the win. I’m sure Coach Pinyan felt the same way, that we were the better team.”

Pinyan, to his credit, spent some post-game moments searching for answers rather than excuses.

Carson reached the Kannapolis 7-yard line before the first half ended with a botched reverse play. And it penetrated as deep as the Wonders’ nine in the third quarter, only to be stopped short on fourth-and-2. Knight’s 89-yard punt return made it 41-0 midway through the period, and second-stringer Terry Anderson bolted 41 yards for the game’s final TD early in the fourth quarter.

“I don’t know,” Sifford said afterward. “I think we had three or four drives inside their 20, but didn’t finish. If we had scored before the second fumble, it would have been 7-7. Who knows what could’ve happened next?”

When it ended, all the Cougars wanted to do was forget it. “We’re a young varsity team, thin on numbers,” said junior DB Jacob Taylor. “Next year we’ll play better and give them a run for their money.”

NOTES: Carson managed only 111 total yards and just 32 in the second half. … Woodruff recovered a fumble at the Carson 37 early in the third quarter. … Sifford ran for 19 yards and passed for 29, but impressed Newsome. “He’s one of the toughest jokers I’ve seen. He took a licking and kept on ticking. I appreciate players like that,” he said. … Carson visits North Rowan next Friday while Kannapolis hosts Mooresville.