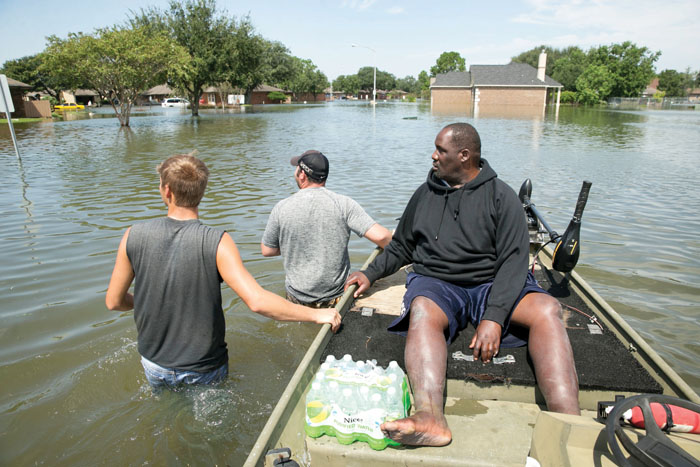 SALISBURY — Local businesses and agencies are collecting items to deliver to hurricane-affected areas of Texas this weekend.

And in Salisbury, the barbers at Man Made Barber and Shave are joining the efforts for hurricane relief.

On its Facebook page, China Grove police posted a list of locations where donations can be made and items desired. People with questions or others who need items picked up can email nstillwell@cgpolice.com, the Police Department wrote.

Locations collecting items to take to Texas include:

The China Grove Police Department wrote that plastic storage bins are desperately needed. The bins can be used when salvaging personal items from flooded homes.

The Police Department said the donated items will be delivered this weekend to areas of Texas affected by Hurricane Harvey.

The staff at Man Made Barber and Shave in Salisbury also has been collecting items for hurricane victims. Owner Brian Hunt, who was a longtime Salisbury firefighter, and the other barbers were watching the news about those who have lost their belongings in the flooding.

“Seeing the massive damage and flooding to the area, we just wanted to figure out something that we could do,” Hunt said.

He posted about the drive on Facebook and said the problem wasn’t receiving donations but what to do with them after they had been collected. A Facebook friend told him that former China Grove police Officer Reese Helms was helping victims in Texas. Hunt reached out to Helms and agreed to add the barbershop’s collected items to Helms’ load.

“I’m hoping this is an opportunity for people to shine and do their best and come together,” Hunt said.

On Thursday, the barbershop received a delivery of 20 cases of water, diapers, feminine hygiene products and baby wipes.

Hunt said baby wipes are definitely a necessity because even people who can’t take a shower are able to clean themselves with baby wipes.