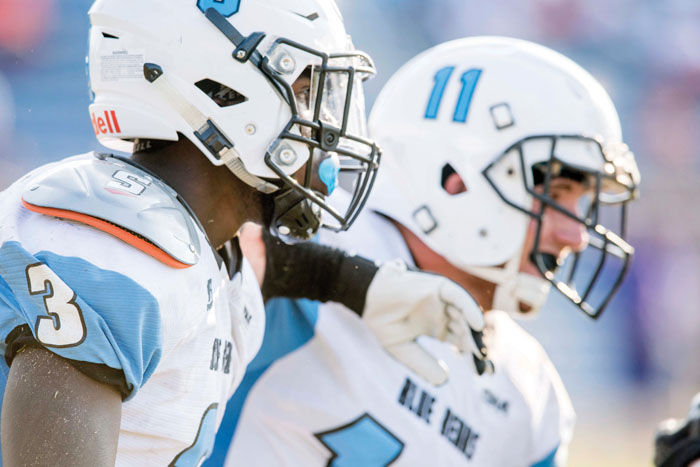 COACHES: Livingstone — Daryl Williams’ record is 15-24 in four seasons. Four seasons prior to Williams taking over, the Blue Bears were 2-38, so progress has been made. Benedict — Mike White third year, 5-16, at Benedict after 15 years at Albany State (112-51, six SIAC championships).

LAST YEAR: Bendict won the Palmetto Capital City Classic over Livingstone, 5-3. Both teams had trouble moving the ball on offense: The Blue Bears had just 119 total yards, including just 8 yards rushing; The Tigers managed 188 yards, most of which came through the air. Livingstone grabbed a 3-0 lead in the first quarter, but Benedict matched the field goal in the second period and also added a safety for the final margin. There was no scoring in the second half.

SERIES:   Saturday markes the 18th time since 1922 that Benedict and Livingstone have met on the gridiron.

KEY PLAYERS: Sophmore quarterback Xavier Longerbeam returns as the starter and should grow with that experience. Williams believes that having a returning starting QB puts the team way ahead of last year.

“Longerbeam has matured and grown as a player and I like what I see, said Williams. “He understands the offense better and he looks ready to take it to the next level.”

Senior running back Jarius Richardson returns for his third year as a starter. Last season, Richardson led the Blue Bears in rushing by far — 749 yards and eight TDs.

On defense, All-CIAA performer Armond Cox moves from defensive end to an interior position. Cox will be starting for the third straight year and was the team’s second-leading tackler last season with 60 stops, including four sacks.

Cox is the only Livingstone players selected to the pre-season All-CIAA squad.

Defensive back Gregory Hines, who led the Blue Bears with five interceptions a year ago, also returns.

Linebacker Jarod Richardson, Jarius’ twin, is back for his third year as a starter. “The Richardsons are playing very fast and both are bigger and stronger,” said Williams. “They bring a lot to the table. They’re team leaders as well, on and off the field.”

The Blue Bears will also have newcomers in the kicking game, other than long snapper Jarrod Brown, a senior who returns.

Reserve QB Thaddeus Bell will punt and John Jones is the new place-kicker. Ludin doubles as the holder.

“We’re excited and looking forward to this week and the first game,” added Williams. “We’ve got a bunch of older guys on defense that are ready to get after it.”