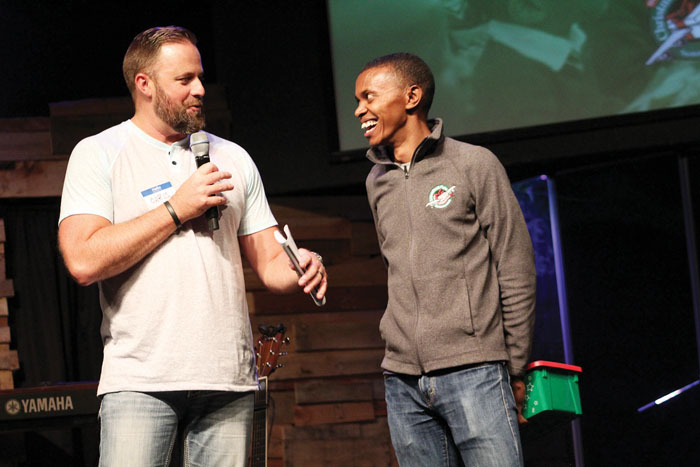 SALISBURY — Though the holiday season may seem far away, Life Church of Salisbury is already preparing for this year’s Operation Christmas Child.

Church members kicked off the charitable endeavor Wednesday with a prayer service open to the community. The service featured light refreshments and guest speaker Alex Nsengimana, who received a shoebox care package in Rwanda as a young child.

“As I share (my story) with you, I hope and pray that you do not see hurt but that you can see the power of God and what he has done,” Nsengimana began.

At 6 years old, Nsengimana’s world would be shattered by tribal unrest. The Rwandan president was assassinated, inspiring members of the Hutu tribe to hunt and mercilessly kill Tutsis.

Nsengimana, a Tutsi, was among the first to be pursued. He lost his caregivers and lived in constant turmoil for the following months.

“My brother and my sister and I would be left in tears, left wondering why in the world a neighbor, a neighbor who we grew up with, who we knew by name, would all of a sudden turn their backs on us just because we’re a different tribe from them.”

Nsengimana spoke of many close encounters with death during his time on the run. In all the instances, it seemed a higher power was on his side, he said.

Once, a Hutu threatened Nsengimana and 19 others in the backyard of a family member. The man’s ammunition magazine fell and shattered before he could harm the children.

“I don’t tell that to gross people out. I tell that to show the power of God,” he said. “Imagine what he can use. If he can use a cow pie to save a life, you bet he can use anything in this world — even a little box filled with so many items that you and I may take for granted.”

Nsengimana received his box each year when he lived in an orphanage along with 250 other Rwandan children. He says that though the box didn’t change his life immediately, receiving it planted a seed.

While grappling for answers as to why he survived the attacks that claimed the lives of so many of his family members, Nsengimana stumbled upon Jeremiah 29:11 — a verse detailing God’s plan to prosper and not to harm.

“I realized that he had to have a plan for my life, and I wanted to find out what it was,” said Nsengimana.

Today, Nsengimana works for Samaritan’s Purse, having been adopted into a Minnesota family at the age of 15. He studied pastoral ministry at Crossroads College and got married in April.