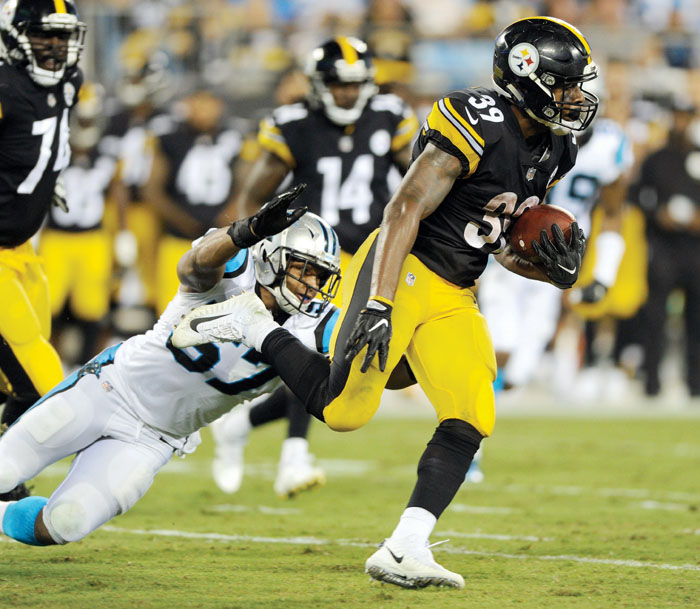 CHARLOTTE (AP) — Rookie Joshua Dobbs threw for one touchdown and ran for the winning score and the Pittsburgh Steelers defeated the Carolina Panthers 17-14 in the preseason finale for both teams.

Dobbs led the Steelers 53 yards on five plays in just 43 seconds and scored on a 1-yard touchdown run with 2 seconds left after rolling out to the right to lift the Steelers to a win.

Dobbs, the Steelers’ third-string quarterback behind Ben Roethlisberger and Landry Jones, finished 16 of 23 for 212 yards, including a 58-yard touchdown pass to Justin Hunter.

Hunter entered the game battling with Sammie Coates for the sixth spot at wide receiver and had three catches for 75 yards. He showed a good burst of speed on a go-route down the right sideline, stretching his arms out to haul in a perfectly thrown pass for the score.

Terrell Watson ran for 89 yards on 19 carries for the Steelers.

Damiere Byrd hauled in his third touchdown catch of the preseason — a 13-yard catch from Joe Webb — from Joe Webb in the back of the end zone for Carolina. Byrd continued to make his case as Carolina’s fifth or sixth wide receiver. He had two TD catches in Carolina’s preseason opener against the Houston Texans.

“As a receiver, those opportunities don’t always come regardless of how much you play,” Byrd said. “It’s not up to you when you get the ball. Joe Webb made the call and had a great read. He put it up for me and I came down with it.”

SITTING OUT: Steelers CB Joe Haden did not play one day after signing a three-year, $27 million free agent contract on Wednesday.

HARRISON PLAYS: Steelers linebacker James Harrison, who hasn’t practiced much this summer, played most of the first half for the Steelers and had a sack to end a second-quarter drive.

POCKET CHANGE: Panthers Pro Bowl tight end Greg Olsen has restructured his contract, which could allow him to make an additional $2 million this season if he reaches certain incentives.

Steelers: Strong safety Jordan Dangerfield left the game in the first half with an ankle injury and did not return.

Panthers: Second-round pick WR Curtis Samuel left the game with an ankle injury. … CB Teddy Williams injured his shoulder in the first quarter and did not return.

Steelers: Open the regular season at Cleveland on Sept. 10.

Panthers: Open the regular season at San Francisco on Sept. 10.