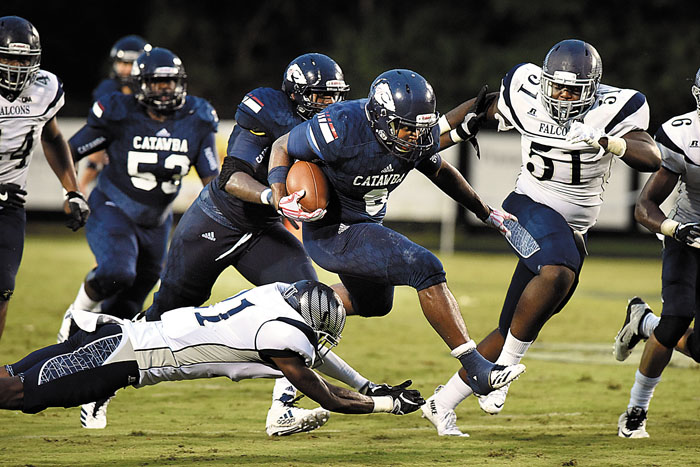 SALISBURY — Eamon Smart barreled off the right side behind C.J. Cain and Demetrius Blackwell for 24 yards on the first snap on Thursday, setting the tone for a long night of offensive efficiency by the Catawba Indians.

As far as defensive efficiency,  Catawba had plenty of that as well. Visiting St. Augustine’s actually faced a third-and-40 in the second quarter at Shuford Stadium on its way to a thorough mauling by the Indians.

Catawba built a 35-o halftime lead and romped 49-0 with a perfect storm of offense, defense and special teams. Catawba didn’t turn it over and committed only three penalties in comfortable weather that turned out to be no factor.

“Not bad,” said Carlton who started at QB and went 9-for-10 for 131 yards with three TDs. “We were supposed to execute against that team and we did. Our receivers made it happen all night and our offensive line was good. They made it easy.”

The key to Catawba’s shutdown defense was cornerback Cris Page. He silenced St. Augustine’s receiver Sam Boyd, a 250-pound monster who gets lots of love from NFL scouts. Boyd had three catches for 18 yards and zero big plays.

“I asked for the challenge of covering Boyd, and I found out on Wednesday that I was going to get to take on that challenge,” Page said. “I followed him no matter where he lined up, and I stayed with him. But I couldn’t have done it without the line and the linebackers. Those guys ate tonight.”

Catawba’s special teams got a masterful effort from Brackman, who was 7-for-7 on PATs and crushed five touchbacks that forced the visitors to start on the 25-yard-line.

“Lee is a weapon,” Walker said. “Kick it in the end zone, make them go 75 yards, and our defense has a pretty good chance to stop them.”

Patrick O’Brien, who starred at UNC Pembroke in recent seasons, threw for 179 yards and two TDs in a backup role. His first snap came on Catawba’s third series after Carlton had his helmet jarred off and had to sit out one play.  After that snap, Carlton was right back on the field.

Both quarterbacks threw the ball extremely well, and Catawba may be in as good a shape at that position as it’s ever been. Catawba scored on all four possessions while Carton was at the controls and went 7-for-11 on third-down conversions.

Mobley’s jet-powered wheels turned a short pass from Carlton into a 42-yard touchdown to start the scoring. That was on Catawba’s third snap, barely a minute into the game.

“We got four touchdowns on screens,” Carlton said. “I don’t know that I’ve ever seen that happen, but our execution on the screens was really good.”

Late in the first quarter, Catawba made it 14-0 when Mobley was able to make an adjustment and a nice snag in the right corner of the end zone on a fade route. But the key to that back-breaking, 99-yard scoring drive was Carlton whipping a 30-yard completion to tight end Jourdan Osinskie when Catawba was facing  third-and-12.

“On that long drive, we executed at a very high level,” Walker said.

That gargantuan drive took a lot out of the visitors. Then a bad snap on a punt attempt handed Catawba the ball at the St. Augustine’s 15 for an easy touchdown. Smart plowed in from the 3 to make it 21-0 early in the second quarter.

Veteran Keyon West ran through several arm tackles, made a move and turned a flip from Carlton into a 29-yard scoring dash with 8:25 left in the second quarter. Greene’s 19-yard TD run made it 35-0 at the break.

O’Brien’s right arm accounted for two second-half scores for the Indians. First, Mobley dashed 65 yards with another screen. Then reserve Jonathan Chege made a heck of a run after a fine catch for a 26-yard score.

“Chege was playing defensive back for us not long ago, but we felt like we needed a little more depth at receiver and he was happy to move over to offense for the team,” Walker said. “That’s the kind of unity we’re talking about.”

NOTES: Catawba’s next game is at VMI on Saturday, Sept. 9. … Catawba’s leading tacklers were DB Chris Thompson (7) and LB C.J. Melvin (6). Both are backups on the depth chart, but a lot of people got to play a lot of snaps and many played well. … Leaders for St. Augustine’s were bullish back Josh Glisson, who hammered for 110 yards on 17 carries, and  linebacker James Hickman, who made 14 stops. … Jake Ford did a good job of punting for St. Augustine’s and kept flipping the field, but Catawba put together six scoring drives of 65 or more yards.

Friday Night Hero: A Hornet that can shake and…