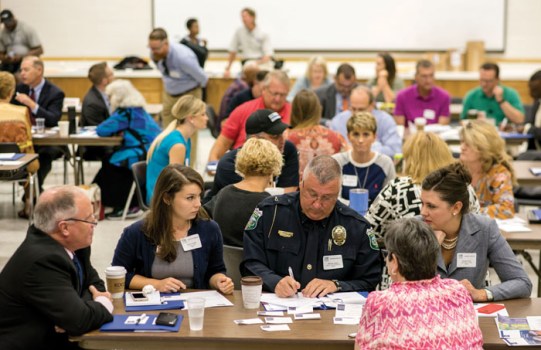 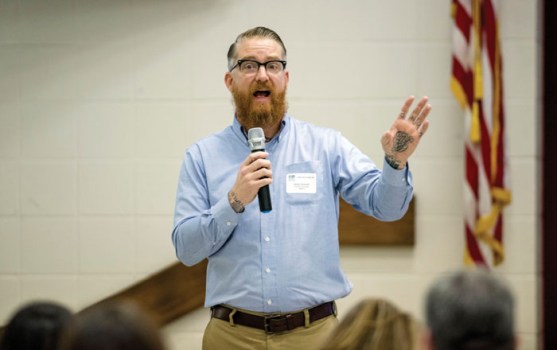 JON C. LAKEY / SALISBURY POST Delton Russell gives a personal testimony of his recovery from substance abuse. A number of community agencies gathered on Wednesday to talk about the local effects of the nationwide problem of opioid abuse at the Rowan County Agriculture building on old Concord Road. The Rowan County Health Department advertised a medication drop box for the public to bring unwanted prescription and over-the-counter medicine. In the three hours the box was at the location it was completely filled with discarded products. Wednesday, August 30, 2017, in Salisbury, N.C. 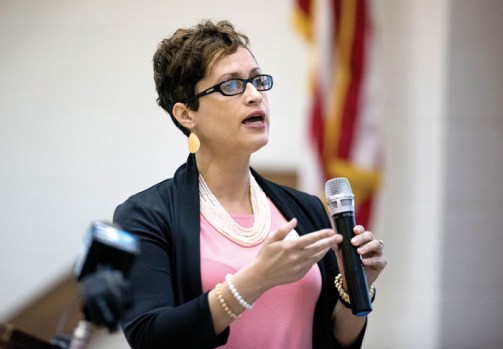 SALISBURY — When Delton Russell was 7, his father let him drink alcohol while on a fishing trip. By age 12, Russell was smoking marijuana with his father.

Russell, who is now a member engagement specialist with Cardinal Innovations Healthcare’s Piedmont Community Operations Center in Kannapolis, has been in long-term recovery since 1996.

Russell shared his story of continued recovery Wednesday during a forum on opioids at the Rowan County Cooperative Extension office.

The forum was designed by the Rowan County Public Health Department to provide county leaders with an opportunity to learn from key organizations about how the opioid crisis affects the nation, the state and Rowan County.

The three-hour forum included not only Russell’s personal story but also information from Dr. Winston Lane of Cardinal Innovations Healthcare about what addiction is and how it affects the brain. Rowan County Public Health Director Nina Oliver spoke to the group of more than 70 people about the local impact, while county Social Services Director Donna Fayko spoke about how opioid use affects families and children.

Opioid abuse and addiction is a growing problem in Rowan County, where residents have seen evidence of this nationwide trend up close.

Local authorities have seen people overdose in homes and public places such as cars and retail stores.

On Aug. 11, a passer-by found a man and woman unconscious on the sidewalk in downtown Salisbury. Both of them had overdosed. The couple’s 5-year-old boy was in their pickup parked nearby. Rowan EMS and police were called to the scene, where medics administered the reversal drug Narcan.

Delton Russell said he chooses to focus on recovery rather than on what led to the addiction.

“Happiness is a choice. Recovery is real,” he said.

Russell said he’s grateful for Narcan because it gives people with addiction the opportunity to recover.

“Dead people don’t recover,” he said. “If we don’t treat why they are engaged in active addiction, we will get the same results.”

On Oct. 16, 2008, Russell walked into a crisis recovery center in Kannapolis and found his purpose.

He is now an advocate and educator who travels in Cabarrus, Davidson, Mecklenburg, Rowan, Stanly and Union counties speaking to Cardinal Innovations Healthcare members and families. He specializes in substance use disorders.

Those attending Wednesday’s forum were divided by assigned tables and asked to come up solutions to the drug problem in Rowan County. One person at the table acted as spokesman for the group’s ideas.

One uggestion was to create a task force made up of representatives from various organizations that could oversee implementation of some of the solutions that groups came up with.

Oliver, the county health director, said all the ideas that were shared and written down during the sessions will be compiled and emailed to those who attended. Her hope is that they lead to real change.

She said the forum wasn’t just a one-time gathering but a chance to take the ideas and move forward.

One group suggested that schools educate children about opioids, but during the sessions a representative from the Rowan-Salisbury school system said that although the idea is a good one, it would first have to be taken before the state legislature.

Before schools could implement such a program, the legislature would have to give the school board the authority to teach the programs.

“A letter should be sent to the local delegation, governor and congressional representative to make a bill to end this,” Pierce said.

Salisbury attorney Darrin Jordan said his group concluded that there needs to be a full-scale inpatient treatment facility in Rowan County. A number of service providers in and around the region offer outpatient services.

The group also recommended working with pharmacies so that they more closely relay information to customers about prescriptions and provide education to people coming from doctor’s offices and the hospital.