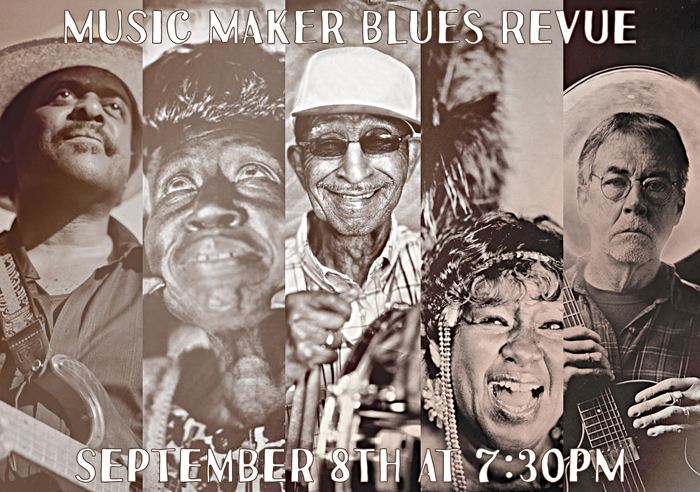 The Music Maker Blues Revue is an all-star band

Written by Krissey Browder for LSt

These artists are a part of The Music Maker Relief Foundation; a 501c3 non-profit that was founded to preserve the musical traditions of the South by directly supporting the musicians who make it, ensuring their voices will not be silenced by poverty and time. Music Maker will give future generations access to their heritage through documentation and performance programs that build knowledge and appreciation of America’s musical traditions.

Lena Mae Perry has been performing hymns and gospel songs with Ethel Eliot in The Branchettes together for well over twenty years. Their style and repertory have their roots in the older African-American musical traditions of congregational hymn singing.

Along with rules for holding the guitar, Cool John Ferguson ignored just about everything folks had to say about genre and style. After graduating from high school in 1972, Cool John went on the road, joining the Earl Davis Trio playing jazz. He played a house gig at Latai Inn at Fripp Island Resort and played at four churches on Sundays. He played for five years with Stephen Best and the Soul Crusaders in black clubs all over South Carolina. Cool John continued to mix jazz, clubs and blues with church music and played on pop recordings with his niece, Esperanza. He even found a spot in the tent revival circuit.

Since the age of six, Pat Cohen was surrounded by music. Her blues classroom was on the porch of her uncle’s house where one played the guitar and the other played the harmonica. Her first professional engagement came in the early 1980’s when she was asked to perform at a local club where she was attending college. For years, Pat sang in New Orleans six nights a week, performing at a wide array of venues including the House of Blues, until Katrina destroyed her home. She relocated to North Carolina and has recently started touring with the Music Maker Blues Revue.

Harvey Dalton Arnold is a singer, guitarist and North Carolina-native who has a passion for the blues. He sold millions of albums as a member of southern-rock band The Outlaws from 1976-80 and has played at Madison Square Garden and Radio City Music Hall. He has also shared the stage with the Rolling Stones at Anaheim Stadium. Harvey performs a left-handed finger-picking style and slide playing on electric and acoustic guitars. He has received much acclaim for founding and performing with The Harvey Dalton Arnold Blues Band.

Drummer James “Bubba” Norwood’s credentials are among the brightest of any Music Maker artist. Known mostly for his long-time association with Ike and Tina Turner, James has anchored the rhythm section for a “who’s who” of blues, soul, and R&B greats. He graduated from Chapel Hill, North Carolina’s Lincoln High School in 1961. Doug Clark of the famed Doug Clark and the Hot Nuts introduced him to Ike Turner later that year and James went on to play for the Ike and Tina Turner Revue until 1969.