Aldrea Speight: Be part of the opioid solution 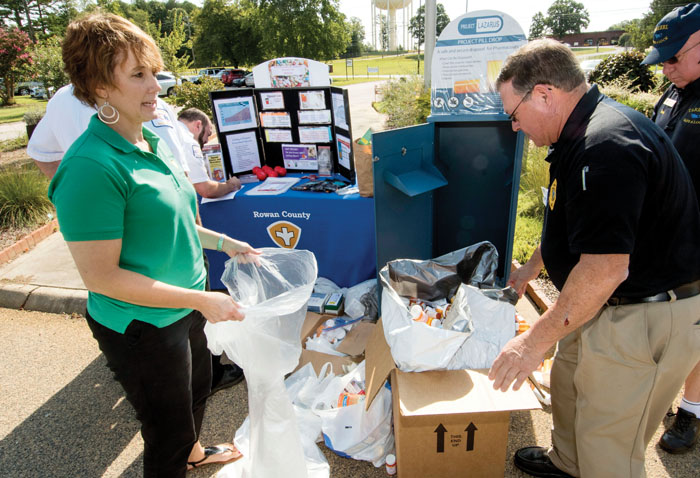 Rowan County Health Education Specialist Amy Smith (left) gets some help from Rockwell Police Chief Hugh Bost to box up the large amount of medication that was left at a drop box at the Rowan County Agriculture building on Old Concord Road in 2017. Salisbury Post File Photo

With the recent articles in the Salisbury Post focusing on opioid addiction, our community is becoming more aware that the use of drugs is now the leading cause of accidental death in the United States for people under age 50.

The Centers for Disease Control and Prevention has found that drug-related deaths are now surpassing the number of deaths caused by shootings and traffic accidents.

According to the American Society of Addiction Medicine, 52,404 people died of lethal drug overdoses in 2015, which is more than the number of people who died from HIV/AIDS during its peak in 1995.

Preliminary data collected by The New York Times estimates that between 59,000 and 65,000 people died in the United States from overdoses last year.

Public health officials believe that this evidence highly suggests that the problem will continue to worsen in 2017, as the CDC waits to receive the final numbers.

With drug overdose rates rising faster than ever over the past few years, devastating many communities and families across the country, many individuals are wondering what is fueling this public health crisis.

The answer is not simple, but many incidents are pointing heavily to increased opioid prescribing, use and addiction.

Opioids are a class of drugs that includes synthetic opioids such as fentanyl, hydrocodone and oxycodone, as well as other well-known prescription pain relievers. Opioids also include the illegal drug heroin.

Opioids are drugs that act on the nervous system to relieve pain and come in many forms such as tablets, capsules and liquids. Continued use and abuse can lead to physical dependence and withdrawal symptoms.

Although drug deaths are rising in all 50 states, according to the CDC, significant increases were seen in the most recent census in the Northeast and the South.

A report released by the North Carolina Department of Health and Human Services in June confirmed that North Carolina is struggling with an opioid epidemic.

The report said that unintentional opioid overdose has claimed more than 12,000 lives in North Carolina since 1999, with opioid-related overdose deaths up more than 800 percent in the state through 2016.

If this rate continues, by 2021 North Carolina can expect to lose more than 1,500 additional lives per year to opioid overdose, a 20 percent increase.

“North Carolina is losing lives to opioids, an addiction that ravages physical and mental health, hurts families and communities, and holds back our economy,” Cooper said.

The governor’s words are correct. Currently, three people die each day from an opioid overdose in North Carolina. Not only has this epidemic caused devastation in our communities and among families throughout the state, the CDC estimates that the cost of unintentional opioid-related overdose deaths in North Carolina totals over $1 billion each year.

Opioid-related deaths in North Carolina are most commonly related to pain medication such as oxycodone and hydrocodone. However, most recently heroin, fentanyl and synthetic fentanyl are resulting in an increase in deaths.

In Rowan County, 29 people died from an opioid-related overdose in 2015. When comparing that number to surrounding counties, data shows that more fatal cases occurred in Rowan County than Cabarrus, Davidson, Davie and Iredell counties.

At a press conference in early August, the Rowan County Sheriff’s Office said it had responded to 73 drug overdose cases this year alone, some being fatal. In the first six months of this year, Rowan County Emergency Medical Services reported administering Naloxone (also known as Narcan), a medication used to counter the effects of opioid overdose, 284 times.

All of this combined lands Rowan County as one of the top 10 counties in North Carolina having the biggest problem with opioid addiction.

Recently, there has been a spark in conversations related to the opioid crisis and what communities and individuals can do to fight this difficult issue across the county and state.

A local strategy that anyone in Rowan County can participate in is to use the Medicine Take-Back Boxes, an initiative that was introduced by the Rowan County Public Health Department in partnership with law enforcement in July 2016.

Ten medication take-back boxes have been strategically placed throughout the municipalities and in a local pharmacy. This initiative offers residents a safe way to dispose of unwanted, unused and/or expired prescription medication, patches, over-the-counter medications, ointments, vitamins, and pet medications.

By properly and safely disposing of extra medications, everyone in Rowan County can do his part to prevent medication abuse, accidental overdoses, crimes related to distribution of prescription medication, and accidental poisonings of young children.

The following municipalities and local pharmacy house a medication take-back box for your convenience:

Every day is a medication take-back day in Rowan County. Do your part.

Aldrea Speight is a health education specialist with the Rowan County Health Department.