Trio from UNC Board of Governors tours research campus in Kannapolis 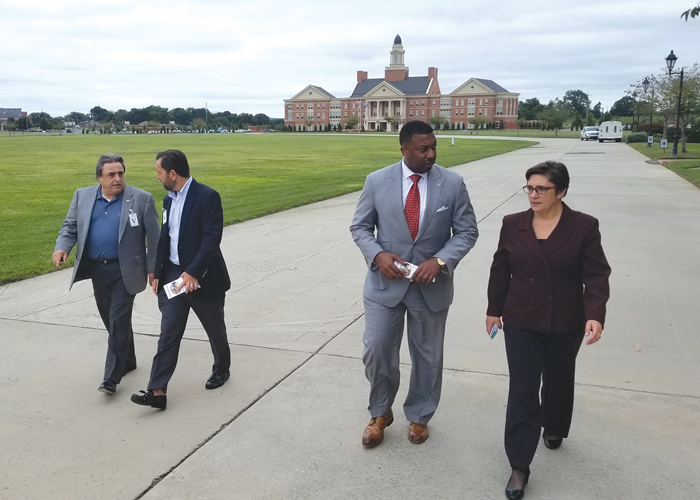 KANNAPOLIS — Many campuses comprise the University of North Carolina System, and the N.C. Research Campus is a good example of those schools working together, UNC Board of Governors member Darrell Allison said Tuesday.

Allison was one of three members of the Board of Governors who toured the Research Campus. He was joined by fellow members Bob Rucho, a former state senator, and Rob Bryan, a former state representative.

The trio spent much of their day listening to presentations or discussions about the work at the Research Campus. After lunch, they toured the campus and spoke with researchers and employees.

The N.C. Research Campus sits on site of the former Cannon Mills, which was owned by Pillowtex Corp. at the time of its bankruptcy in 2003. The site has been redeveloped since that time and is now the home of corporate, academic and health care entities focused on health, nutrition and agriculture research.

Taking questions from reporters after the tour, the board members called the N.C. Research Campus a good example of collaboration. They spoke about its potential effects on the local economy.

“We are the UNC System, and this is a wonderful example of the best from the universities coming together and working collaboratively,” Allison said.

He said the campus can be an asset for all UNC System campuses and could improve the quality of research produced by the schools.

Rucho said it’s not feasible to establish similar facilities at every school in the UNC System. The N.C. Research Campus is an example of “changing the paradigm” for academic research, he said.

“It’s cost-prohibitive, first of all, and second of all, the information that comes out of here, through video conferencing and other means, allows all 16 campuses to share in that,” Rucho said. “The faculty at some of the smaller campuses could be participants here.”

He used a metabolic chamber at the Research Campus as an example of a facility that could not be built at every school. The chamber, which is used to measure how a person expends energy, is one of a few in the United States.

Rucho said one of the best ways to help the N.C. Research Campus is to bring more research-focused businesses to North Carolina.

One presentation on Tuesday focused on a proposed food processing center that would allow companies to develop, design and test new food products. A state-appointed committee is working to finalize details for the center. Proponents say it would boost the state’s economy.

“The more we can produce manufacturing, the better the state is,” he said. “One, it produces more money, but it also produces a lot of ancillary jobs. … So it just helps build a strong, more diverse economy.”

The three Board of Governors members said UNC System schools should not see the Research Campus as taking away from individual schools.

“If we see it as a good, collaborative move for the whole system, then we need to find a way to encourage it,” Bryan said.