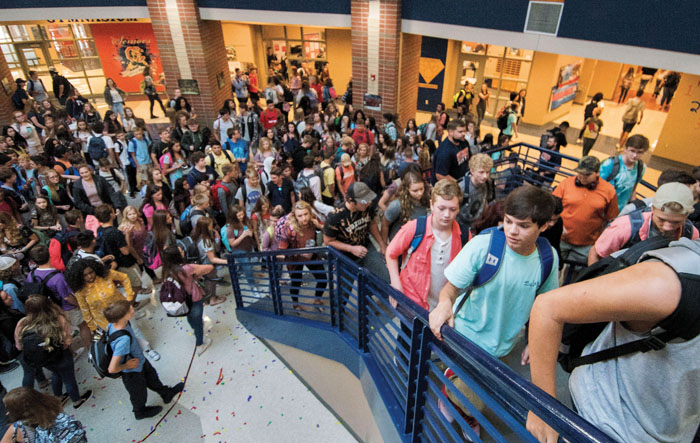 Students make their way to class on the first day of class at Jesse Carson High School on Monday. Jon C. Lakey/Salisbury Post

SALISBURY — Monday morning, students looked forward to meeting their teachers and starting a new school year. But in many classrooms, no one was standing at the front of the room.

As of Monday, the Rowan-Salisbury Schools still had 18 teacher vacancies.

But that’s better than last year, when the system began the 2016-17 year with roughly 70 vacant teacher positions. On July 20, the system had 51 vacancies for classroom teachers.

District teacher recruiter Jeanie McDowell said that success is because of a number of factors. Over the past year, RSS has become more aggressive in trying to attract new teachers and to retain those it has.

“This year, we really did a lot to expand our reach,” she said.

One of the tactics is McDowell’s own position, which the Rowan-Salisbury Board of Education created in February 2016 to help stem the tide of vacancies. The board also implemented sign-on bonuses, increased teacher supplements, and created partnerships with local businesses and real estate markets to help attract and retain certified teachers.

But even McDowell’s position has evolved in recent months — trying new tactics to reach a different generation of teachers. Recruiters and district representatives travel farther afield now, often attending job fairs as far away as New York state. District staff are also zeroing in on candidates who might be interested in lateral-entry positions, as well as providing professional development for new and current teachers.

McDowell and the district also have shifted focus to advertise vacancies heavily on social media.

“We just tried a lot of new things to see what would work,” McDowell said.

Current open positions span 13 schools, from elementary through high school. The majority of vacancies are for exceptional children teachers, though there are multiple openings for elementary classroom teachers.

McDowell said the numerous EC openings are because fewer students are choosing to major in those fields in college.

“There’s a shortage across the state,” she said.

Most of the district’s 18 openings have at least one or two applicants.

“It’s just finding the right fit for the positions and for the schools,” McDowell said.