Prep Notebook: Hooper was super for the Mustangs 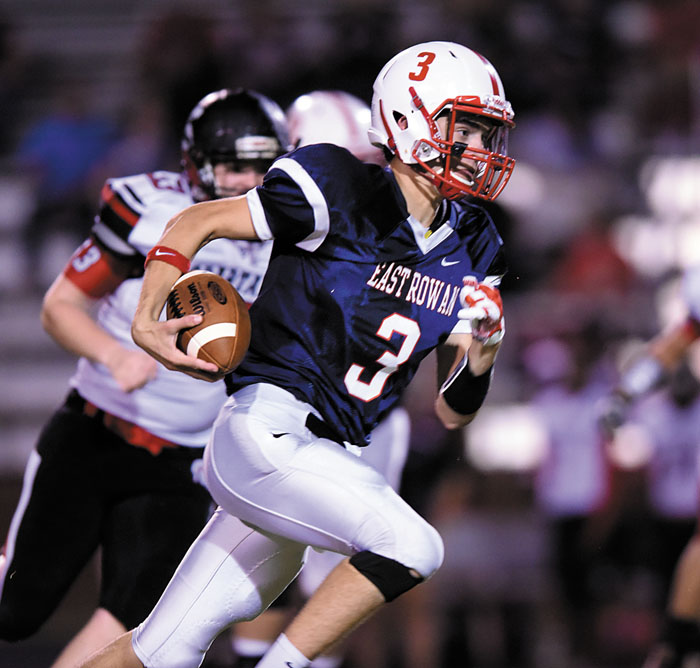 Elton Hooper, who has experienced a few shining moments for East Rowan’s basketball program, has grown to 6-foot-7, so the junior isn’t  hard to spot on the sideline. Hooper is playing football for the first time this season, and the towering defensive end recorded three sacks in the Mustangs’ 49-0 romp against Central Davidson on Friday.

“Elton played out of his mind,” said East head coach John Fitz, who recorded his first victory at the helm of the Mustangs (1-1).

“We made quite a bit of progress from Week 1 to Week 2, just like you’re supposed to do,” Fitz said. “We were a lot better mentally in our second game. We were in a much better frame of mind.”

Due to the dismal weather forecast, East’s game at South Rowan has been pushed back to Labor Day Monday at 7 p.m.

South (0-1) was open last week, so the Raiders will go 17 days between their first and second games. East blasted the Raiders last season, 47-0, but South still holds a comfortable 33-18 lead in the series.

Except for Jacob Young’s sterling performance (a 41-yard field goal and five booming punts), a 27-11 loss to West Rowan didn’t include many bright spots.

“Honestly, no one played well,” coach Ben Hampton said. “We’ve got to put our noses to the grindstone and work to get a whole lot better. If we don’t get a lot better, we’ll get embarrassed again this week by Lexington.”

North Rowan plays at Lexington’s Philpott Stadium tonight at 7 p.m. The game was moved up due to weather concerns.

North (1-1) leads the all-time series with Lexington, 25-14, and has won the last four meetings. North back Jaleel Webster set a school record last season against Lexington with 302 rushing yards on 20 carries. The schools didn’t play in 2011-12. The last time the Yellow Jackets beat North was in 2010.

West’s 27-11 victory against North was a nice bounce-back after a 29-3 loss at Mooresville on opening night.

“I’m happy for our guys, they worked hard in practice and deserved the win,” West coach Joe Nixon said. “Our guys get excited for county games and we played a lot better than we did in our first one.”

West (1-1) has won its last eight county games and 59 of the last 62. West’s famed 44-game county winning streak that lasted 11 years ended on a wild night at East Rowan in 2012, but the Falcons obviously aren’t ready to relinquish their title as kings of the county.

The win going into West’s open week was timely for morale purposes. And this is a great week to be open, with so many weather concerns.

Nixon praised defensive linemen Devin Turner and Baiden Suddarth, linebackers Anthony Chance and Daniel Durham and defensive back Brandon Wallace for their work against North Rowan. The Cavaliers were held to 36 rushing yards.

DB Malcolm Ingram logged the 11th interception of his career against North. The school record at West is 21 by Zeb Link. Josh Avery had 17.

There was a hush for about 10 seconds when Carson receiver Jamarius Hairston, already a 1,000-point basketball scorer, got crunched in the end zone after making his first career TD catch and stayed down.

Hairston was able to return for Carson’s next offensive possession.

Told that he’d scared some people, Hairston replied: “Hey, scared me, too.”

Carson added another fine basketball (and baseball) player to the roster last week. Cameron Prugh will be part of the receiving corps.

Carson (1-1) is taking on A.L. Brown for the first time this week. That game has been moved up to tonight at 7 p.m.

South Rowan played the Wonders every season from 1961-2016, but not this year.

Sophomore linebacker Jabril Norman was Salisbury’s defensive player of the week after a three-sack effort in a 41-12 win against Carson. Defensive leader Nick Austin was out with an injury, but other Hornets compensated.

“Jabril was flying around, and our other outside linebacker Blaine Shellhorn (another sophomore) also had a strong game,” Salisbury coach Brian Hinson said.

“They were very productive,” Hinson said.

Salisbury’s freshman back Mike McLean logged what should be the first of many varsity touchdowns against Carson. McLean is such a good athlete that he also may be on Salisbury’s basketball team as a freshman.

Davie has produced scarily low offensive numbers so far and is giving up sacks, as evidenced by QB Josh Hall’s minus-65 rushing yards.

The only TD for Davie (0-2) in a 28-7 loss at North Davidson came on a pick-six by Hite Merrifield, the brother of Kansas City Royals second baseman Whit Merrifield.

Davie’s home game with Mooresville has been moved up to 7:30 p.m. tonight.

A.L. Brown’s 35-14 loss to Marvin Ridge, one of the worst home losses in several years, was mostly a product of giving the Mavericks’ offense short fields to work with. The Wonders actually had a 217-112 advantage in rushing yardage.

The Wonders (1-1) had plenty of hurries, but no sacks of Marvin Ridge QB Bryce McLain, who made a lot of plays on the run.

A.L. Brown’s 1989 state championship football team was announced as one of the inductees in the latest Cabarrus Sports Hall of Fame class.

The Carson-A.L. Brown jayvee game has been rescheduled to Sept. 28.

Friday Night Hero: A Hornet that can shake and…