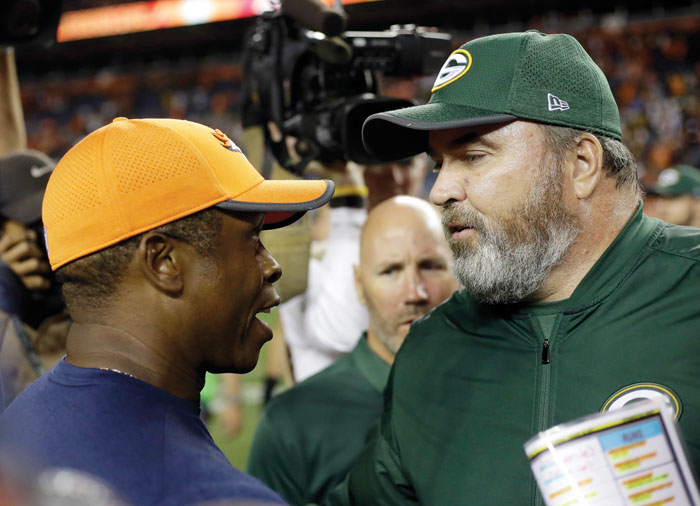 Out with the cringe and in with the fringe.

The final slate of preseason games Thursday night will feature fewer key players at risk and more aspiring bubble busters getting one last chance to make their team with the 75-man roster cut down eliminated.

Some 1,200 players will flood the market this weekend as teams go straight from 90-man rosters to 53.

“That helps everyone involved in my opinion,” Broncos coach Vance Joseph said. “For the young guys to have a chance to play one more game to prove their worth to us and the entire league, it’s valuable for those guys. For our staff to not have to play our valuable backups for an entire game, that’s also huge.”

For instance, Broncos backup linebacker Corey Nelson “would have to play the entire fourth game” in the old setup, Joseph said. “Now, he can play a quarter, maybe a quarter and a half and now he can sit, watch and get ready for the Chargers” whom the Broncos host Sept. 11 in their opener.

“So, that’s big. And in our evaluation it’s huge for us also to see those guys one more time, that one more chance to impress a coach with one play you can make. It’s awesome for everyone involved.”

Ex-general manager Bill Polian agrees. He was a longtime advocate of the league going with just one cut down, which faced stiff opposition on the league’s competition committee until this year.

“I think the obvious ramification is that it will give the teams more players with which to play and, as a result, reduce the potential of injuries to key players,” Polian said. “The cut to 75 had virtually zero effect other than the fact that it made it much more difficult to get your team ready for opening day by having to play some key guys in the fourth preseason game.”

Polian was on the forefront of change in the early 2000s when he was with the Colts and started playing Peyton Manning for just a series or so in the final preseason game. Soon, teams were doing the same to their stars, if they played them at all in the final exhibition game, which they used more for evaluation than preparation.

With 15 more players available to them Thursday night, teams can avoid risking injuries to their starters — Joseph said he plans to sit 25 players or more — and allow key backups to head into the regular season fresher.

“And this game is very important by the way,” Polian said. “It’s not unimportant. The idea that we don’t need four preseason games, I quarrel with that. The fourth preseason game is to determine about the last seven or eight spots on the roster.

“And invariably, by playing all these young kids in this game, you’re going to get the opportunity to see someone rise to the top that you didn’t anticipate making the team. It happens every single year.”

With the 75-man roster cut down, teams used to soften the blow for many veterans by saying they’d released them early so they had a better chance of catching on with another team.

That hardly ever panned out.

“That rule was promulgated when we played the final preseason game on a Saturday or Sunday prior to opening week,” Polian said. “Now, if you claimed a guy on waivers Sunday, by the time you get him to your facility and gave him a physical and got him acclimated, you’re now on the eve of the fourth preseason game. He’s not capable of playing. He doesn’t know enough, unless he’s a kicker or a punter.

“So, it was non-functional.”

Coaches are glad to have 90 players instead of 75 this week.

“I think it’s a good thing,” Raiders coach Jack Del Rio said. “I know the league will look at it at the end of the day and analyze pluses and minuses, but I know it’s a good thing to have. A lot of these young men have one last opportunity to give us an impression as we make our decisions.”

It’s not just the extra game, but the additional practices that could make a difference.

“It’s clearly a benefit for everybody to be able to work with these players another week,” Packers coach Mike McCarthy said. “It makes the fourth preseason game more competitive. I think any time you have extra time to develop players, it’s nothing but a good thing.”

Personnel departments will have an extra 500 or so players to sift through this weekend, but teams have already determined their targets among probable cuts this weekend, Polian suggested.

Any players who flash in the fourth preseason game most likely will temp their own teams to keep them.

“And this is another great exposure for young players and hopefully they get jobs because of it,” Polian said. “But the bottom line is this has zero effect on who you’re going to claim. You’ve already made that decision.”