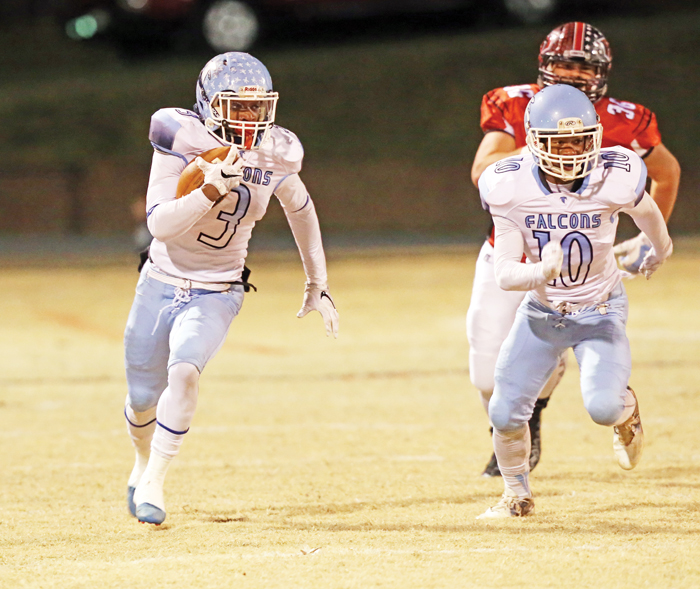 James Sipes/for the Salisbury Post ... West Rowan’s Jalen Houston (10) looks to block during the playoff game last year at Hibriten. Houston had a breakout game for the Falcons last Friday, in a 27-12 win over North Rowan. Houston is one of The Post’s Friday Night Heroes.

As one of West Rowan’s go-to wideouts, the sophomore is making people forget older sibling Juwan by blazing a trail of his own.

At 5-foot-8, 160 pounds and 15 years of age, Houston is quickly ripening into something special. A second-year receiver with Charmin-soft hands, he’s already caught seven passes from quarterback Payne Stolsworth this season. And yes, he’s fast — faster than a cheetah at dinnertime.

“He is really fast, not just normal fast,” Falcons’ offensive coordinator B.J. Sherrill emphasized. “What we’re seeing is defensive backs giving him some cushion at the line, respecting his speed. That doesn’t always work out because Jalen is so quick at getting up to top speed, he goes right by people.”

Houston’s stock is rising faster than gasoline prices after Friday’s 27-11 win against visiting North Rowan. He was a yards-after-the-catch specialist, snagging four receptions for a career-best 118 yards and scoring his first touchdown of the year.

He got his first 11 on West’s initial play from scrimmage, advancing the ball to the 34-yard line.

“I remember (Stolsworth) threw it to me and a defender was about to come up,” he said. “So I made a quick move to the outside and all of a sudden there were wide receivers and linemen blocking for me. I just went with it.”

Houston’s ability to stop, make catches away from his body and turn with precision is something only the most seasoned receivers have mastered.

“It all starts with speed,” Sherrill said. “When you’re as fast as he is, a lot of other things come easy. Being super-fast and being able to stop on a dime, that’s tough to do.”

Houston, who runs the 100-meter dash in 10.9 seconds, caught two more passes in the first period. With North ahead 3-0, he grabbed another short throw and turned it into a 24-yard gainer to the Cavs’ 43. Three snaps later he recorded a 9-yard pickup to the North 13.

It helped set the stage for Martavio Rankin’s short TD burst as the second quarter unfolded. West rode that momentum to 20-3 third-period lead before Houston and Stolsworth combined for the game’s longest play, a defining moment that signaled Houston’s arrival.

“It was still early in the third quarter,” Sherrill explained. “We weren’t about to just run it and punt. I looked over at Coach (Joe) Nixon and he gave me a look that said, ‘Be aggressive.’ So I called the pass to Jalen and everyone executed.”

Especially Houston. Facing third-and-9 from the West 26-yard line, he broke from the right side and found some space behind North’s linebackers, turned and gathered a perfect strike from Stolsworth. “It was right there,” he said, cupping his hands in front of his chest.

So was the unoccupied drag strip down the left sideline. Houston checked his mirrors, found a lane and froze a wandering North defender as he motored into the end zone on a 74-yard touchdown run.

“The line provided good protection,” Houston said. “I just ran past the defender and did what I do best — just run. I ran as fast as I could, hoping no one would haul me down from behind.”

If someone had, Houston — an AAU state champion in the 110 hurdles — may have eluded them.

“When he caught it and turned the corner, then turned on the jets like that,” Sherrill said, “there’s not many people who can catch him.”

There’s another thing that distinguishes Houston from his older brother — his sense of style. He’s known for wearing unique outfits — colorful tie dyes and pants splattered with novelty prints of hamburgers and crayons — that get him noticed.

“He’s his own person,” Sherrill said with a warm smile. “Yeah, he wears the funniest outfits. But he’s a nice kid who doesn’t cause any problems. He just shows up every day and works hard.”