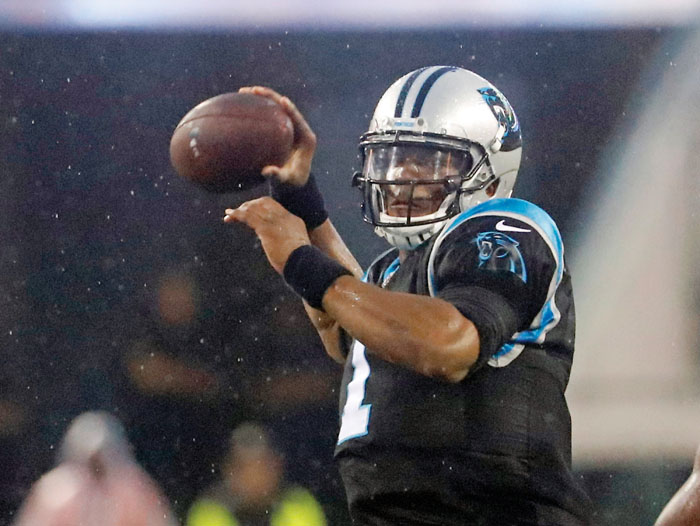 FILE - In this Thursday, Aug. 24, 2017 file photo, Carolina Panthers quarterback Cam Newton throws a pass against the Jacksonville Jaguars during the first half of an NFL preseason football game in Jacksonville, Fla. Panthers coach Ron Rivera isn’t concerned about quarterback Cam Newton receiving only limited reps in the preseason. He hasn’t decided if Newton will play in the preseason finale against the Pittsburgh Steelers this week. (AP Photo/Stephen B. Morton, File)

Carolina’s seventh-year head coach said he thinks Newton will be just fine when the Panthers open the regular season Sept. 10 against the San Francisco 49ers even if he doesn’t take another snap this  preseason.

“You do what you have to do,” Rivera said of Newton’s small sample size of reps following offseason shoulder surgery. “He’s on track and I think he has done some good things. You wake up every morning just wanting to make sure he’s fine. But he’s done everything we have expected so far.”

The 28-year-old Newton missed the first two preseason games with soreness in his right shoulder stemming from surgery in March to repair a partially torn right rotator cuff.

He played one series Thursday night against the Jaguars, capping a 10-play drive with a 9-yard touchdown pass to Kelvin Benjamin. He finished the game 2 of 2 for 21 yards, but did not carry the ball on any designed runs.

Newton said he after the game he felt “great” and declared himself ready for the season opener.

“Absolutely,” Newton said. “You ain’t got no choice. When everything gets to going, pretty sure coach will have everyone ready to go. And that’s all you can ask for.”

Newton hinted that he wanted to play in Carolina’s final preseason game against the Steelers this Thursday night, but knows that decision is out of his control.

Rivera said Tuesday he hasn’t made a decision on whether Newton will play.

Rivera traditionally has rested his starters in the fourth game rather than risk injury. Like many coaches around the league, he’s used the preseason finale as a chance to evaluate the players near the bottom of the roster rather than as a final tuneup for the regular season.

“I was excited when they told me I was able to play — and again, they didn’t tell me how much,” Newton said. “I wish it could have been more. I fell behind in a lot of ways in this game, but the optimism of this game was we did have a great first drive. I just have to take full advantage of the time that I do get. “

The only time Newton has played in the final preseason game was 2011, but that was because the team was frantically trying to get the then-rookie QB ready for the regular season.

Newton has been getting plenty of reps in practice.

He participated in all drills for the second straight day Tuesday and looked sharp. But he said it’s difficult to project how Newton will perform until the regular season arrives.

Rivera said the two most competitive situations on the Panthers entering the final preseason game are at wide receiver and defensive end. The team also needed to make some decisions on special teams — veteran Graham Gano or rookie Harrison Butker at kicker, and veteran Andy Lee or youngster Michael Palardy at punter.

NFL teams must trim rosters to 53 players by Saturday.

Injuries could have an impact on Carolina’s roster decisions.

Last year’s first round draft pick defensive tackle Vernon Butler, veteran defensive tackle Kyle Love, rookie cornerback Corn Elder and rookie defensive end Daeshon Hall remain out of practice due to injuries and it is unclear if they’ll be back for the regular season opener.