Strange things I found while reading about food 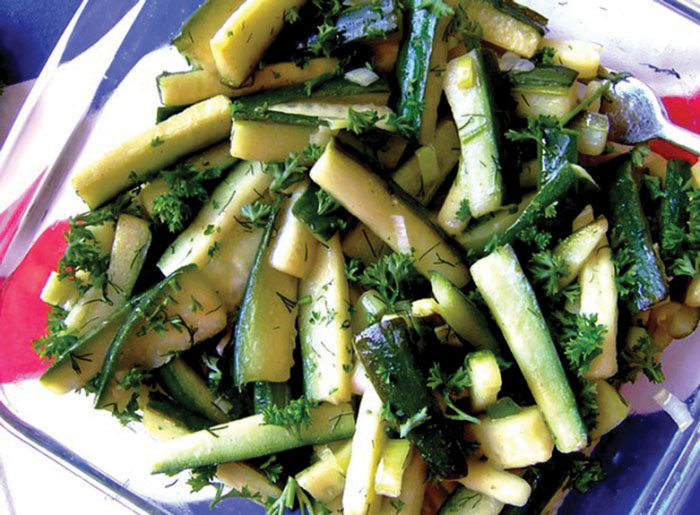 Reading through the many food-related blogs I watch, I found some interesting, if slightly odd recipes.

In an  entry on thekitchn.com, Sheela Prakash shared Julia Childs’ recipe for baked cucumbers. We’re all familiar with the onslaught of cucumbers summer brings. You hate to waste them, but then again, how many salads and cucumber sandwiches can you eat?

Prakash writes, “Baking cucumbers does not turn them to mush, as you may think. Instead, they become silky and incredibly tender, with an earthy flavor that’s a bit reminiscent of pickles, due to the vinegar, sugar, and salt in the recipe.”

If you are brave enough to try it, let me know what happens.

Concombres Au Beurre (Baked Cucumbers)
If the natural moisture content is not withdrawn beforehand, cucumbers exude so much water as they are heated that you usually end up with a tasteless mush and swear never to attempt cooked cucumbers again. Blanching for 5 minutes before cooking will remove unwanted water, but also most of the cucumber flavor. A preliminary sojourn in salt draws out the water and also the bitterness, if they are of the bitter European type, yet leaves the flavor, which a little vinegar and a pinch of sugar accentuates. We have found the following method delicious, and suggest it for all cooked cucumber recipes. Baked cucumbers go with roast, broiled, or sautéed chicken, roast veal, veal chops or scallops, and sautéed brains or sweetbreads.

Peel the cucumbers. Cut in half lengthwise and scoop out the seeds with a spoon. Cut into lengthwise strips about 3/8 inch wide. Cut the strips into 2 inch pieces.

Toss the cucumbers in a 2 1/2 -quart porcelain or stainless steel bowl with the vinegar, salt and sugar. Let stand for at least 30 minutes or for several hours. Drain. Pat dry in a towel.

In a baking dish 12 inches in diameter and 1 1/2 inches deep, toss the cucumbers with the butter, herbs, onions and pepper. Set uncovered in middle level of the preheated oven for about 1 hour, tossing 2 or 3 times, until cucumbers are tender but still have a suggestion of crispness and texture. They will barely color during the cooking.

The online version of this story got rave reviews.

This could change everything — if the computer can figure out what a potato chip is.

According to Aol.com, a new app, Pic2Recipe, is being developed at MIT. Researchers at the school’s Computer Science and Artificial Intelligence Laboratory have created a neural network to find connections between more that 1 million images and recipes.

A demo showed that the app identified sugar cookies, except it missed three ingredients.

When the Verge put the app to a test, it could not identify potato chips, bowls of ramen or rice and beans.

It’s an idea that isn’t quite ripe yet.

A kernel of an idea

Popcorn is good for you again

But no, you can’t eat the movie theater butter popcorn if you’re trying to lose weight, sorry.

EatingWell.com says popcorn can be a very healthy choice, and gives the health food outline:

• It’s a whole grain: The term “whole grain” may bring to mind loaves of bread flecked with bran or a bowl of oatmeal, but popcorn also counts. In fact, popcorn eaters get 250% more whole grains in their diet than people who don’t eat popcorn. And like other whole grains, crunchy popcorn is high in fiber (women need 25 grams and men need 38 grams in their diets daily).

• It’s got stellar nutrition stats: Not only is popcorn high in fiber, it even delivers some protein. A 1-ounce serving (about 3½ cups) has 4 grams of fiber, almost 4 grams of protein and clocks in at 110 calories. This combination makes it a snack with staying power.

• Popcorn has antioxidants: It may be surprising, but popcorn is chock-full of polyphenols, the same compounds found in berries and tea that are linked to heart health and a lowered cancer risk.

• It’s low in calories: Popcorn is filled with air (think about how small the kernels are compared to after they’re popped). Because it’s airy, you get a pretty large portion without a lot of calories. You can eat 3 whole cups of popcorn for only 100 calories.

But how do you make said healthy popcorn? Here’s a basic recipe: put 1/2 cup popcorn kernels in a sandwich bag with a quarter teaspoon salt and 1/2 tsp. oil. Fold the top of the bag securely, place in microwave and cook for 2-3 minutes.

WARNING: Overcooking can result in burned popcorn and a fiery bag. I know this, because in the dark ages when I was in college, there were no microwavable bags of Orville Redenbacher, all we had was the brown bag method, and a young lady on my hall set the microwave on fire by leaving the popcorn in for 10 minutes.

You can also microwave the plain popcorn in a microwave safe bowl with a plate for a lid. Use 1/2 cup popcorn kernels and 1 tablespoon olive or canola oil.

Then it’s up to you how to flavor it.

Trying to get your kale in? Try

Preheat oven to 325 degrees. Make sure kale is completely dry, then toss with oil and salt. Place on a baking sheet and cook until crispy, abut 10 minutes. Stir once or twice during cooking.

Place the cooked kale into a food processor along with the lemon zest and grind into a fine powder before sprinkling over popcorn. Or, just mix the two together in a bowl with a fork to break down the kale and toss with popcorn.

Sprinkle with curry powder or coriander (for a lemony flavor), even cinnamon. Try Chinese five spice or a little soy sauce (no salt, please).