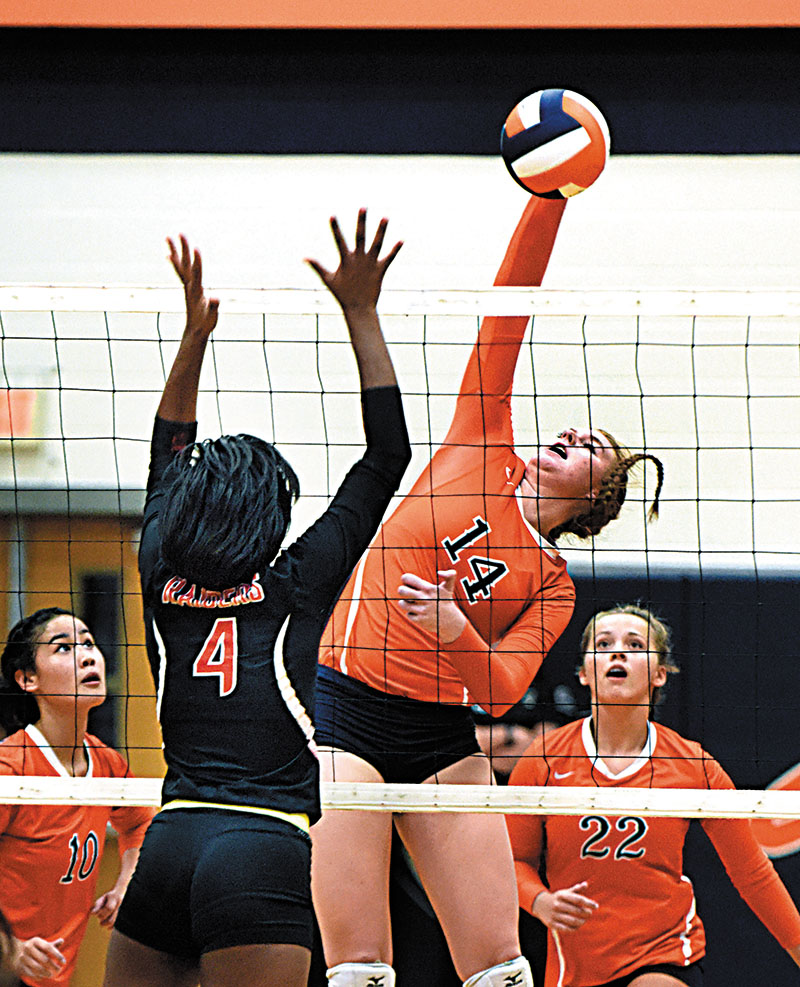 CHINA GROVE — Life without 2016 Rowan County Volleyball Player of the Year Elena Turnbull isn’t going to be easy for the Carson Cougars, but they’re managing.

Carson coach Kelan Rogers has added freshman Jaden Vaughn to the mix, and while her initials are JV, everything about the 5-foot-9 outside hitter’s game says varsity. Vaughn isn’t as aggressive and dynamic as Turnbull was — not yet — but she can provide the same sort of digging/hitting versatility that Turnbull did.

South is 3-4, but the Raiders aren’t bad. They expect to be in the upper tier of the 2A Central Carolina Conference after moving down from the 3A ranks.

“I was really proud of how hard we played the first two sets today, but Carson has two hard hitters,” South coach Jenna Horne said. “Then, in that third set, we just ran out of steam.”

“We were really sluggish at the start, and I should have expected that,” Rogers said. “Mondays are almost never good and this also was the first day of school. I think our kids had gotten used to getting up at 11 a.m. They just weren’t ready to play.”

That was an understatement. A few minutes into the first set, it was 7-all, and the Cougars already had made two unforced errors and missed four serves. Rogers had seen enough and called an early timeout.

“He told us to regroup and start over,” Thomas said.

The critical juncture of the first set came after a kill by South’s Janiya Downs and a Carson mistake made it 13-all. But a kill by Vaughn put the Cougars ahead to stay and sparked a quick Carson run to 18-13. Carson cruised from there.

South played its best in the second set, hanging with the Cougars a long time with kills from Downs, the junior basketball phenom, and Kira Rymer, a tall sophomore with a hammer for a right hand. South’s sophomore setter Michaela Hallman was getting the ball to Downs (10 kills, nine digs) and Rymer (nine kills, eight digs) where they needed it, and it was 17-all after Downs punched another loud kill to the floor.

The biggest point of the match was the next one, and Thomas understood that. She set for Weast on the left side, where she’s close to automatic. Weast surpassed 500 career kills earlier this season, and she put it down for an 18-17 lead. Then Carson got a break on a ball that caromed high and bounced off a beam. Then Thomas fed Weast again for 20-17, and the Cougars were headed for victory and a 2-0 lead.

“At times today, it was Jaden or Lindsay (Elmore), but Mallory had the hot hand when that set got close and finding that hot hand is what we’re trained to do,” Thomas said.

Thomas was the most consistent Cougar, but Weast was the most spectacular. She had tremendous flurries in the second and third sets.

“I had some bad plays today,” Weast said. “But the important thing was putting a bad one behind me and getting that next ball. I got down, but then I got back up and rolled with it, and I helped us get on some nice runs.”

Not long after Elmore stuffed Rymer in the middle to begin the third set, South deflated like a pin-pricked party balloon. Downs and Jenna Strickland kept digging, but the Raiders couldn’t solve Carson’s defense. The last tie was at 5-all. Then Carson pulled away. Vaughn was the go-to girl for a while, then Elmore, and finally, Weast. It went from 21-11 to 24-11 on three straight rockets by Weast before Sophie Andrews took care of the last point of the match.

Besides Vaughn, Carson has another important new face in freshman libero Kary Hales. She had nine digs and several aces.

“We gave away far too many points today, but we’ve played really good at various points this season,” Rogers said. “We’re kind of a young team, but Grace is doing well, Weast has turned up her game, and Lindsay (Elmore) is starting to move better. She missed about two months with a leg injury. We just got her back two weeks ago.”

Elmore, a 6-foot-1 middle hitter and a Queens commit, is another returning all-county player for Carson.

Strickland had 14 digs for the Raiders, while Hallman had 14 assists.

South has a CCC home game today against North Davidson. Carson goes to Robinson on Thursday.