Local father taking supplies to Texas and visiting daughter there 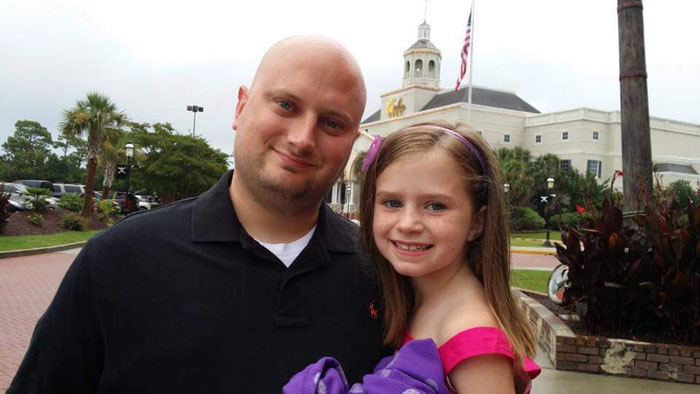 A little girl in Texas is feeling the love right now from friends and family in Rowan and Davidson counties.

Cadence Helms, who turned 11 on Monday, was displaced from her home in Mont Belvieu, Texas, where she lives with her mother and stepfather, Jessica and Timothy Grisham.

Cadence’s dad, Reese Helms, who lives with his wife, Heavan, in Kannapolis, decided he wanted to go see his daughter, with whom he talks each weekday.

“She’s like my little best friend,” Helms says. “I really just want to go down there and put my arms around my kid and show her that, even though distance is a factor, we’re going to be there for her.”

Helms decided if he was going to make the trip, why not take items that folks there need in the wake of devastating flooding caused by Hurricane Harvey?

He mentioned the idea to his employers at N’Tune Car Stereo. Helms works in the Lexington office, 1912 Cotton Grove Road, but there is also a Salisbury office at 1913 S. Main St. Co-owners Mark Baker and Mitch Swicegood immediately offered the use of a 24-foot trailer.

“This is a family-owned business, and we are family,” says Helms, who’s worked there part time or full time for the past 15 years. He also served for 10 years with the China Grove Police Department.

Here’s what Helms is gathering: water, diapers, wipes, canned goods, clothes, shoes, health products, feminine products, gift cards, and small toys and games. He and his wife plan to leave Saturday as soon as he gets off work in Lexington at 5. He’ll then pick up the items from the Salisbury store and be on his way.

His destination is Chambers County, Texas — where Mont Belvieu is located — which at present is not receiving federal assistance, he says.

“I’ve been in contact with EMS there, and I’m going to get to wherever I can make it. I feel wholeheartedly they will distribute the items for us.”

For folks who would like to make a donation to the effort, Helms has set up a gofundme page (https://www.gofundme.com/nc-to-tx-harvey-help). He already has collected enough money to feed the 50 members of the EMS staff at Mont Belvieu, who have been working around-the-clock since Hurricane Harvey made landfall.

“It’s not a horrible drive,” he says, “but the distance is a killer.”

Helms typically visits Cadence four to five times a year, pulling a large trailer that he stays in during their weeklong visits. Cadence also comes to North Carolina on school breaks longer than three days, and she just returned to Texas in mid-August after spending the summer here.

Helms says this will be a “hail Mary” trip. “We’re just going down and back because we both have to be back at work Thursday,” he says. “Cadence has asked for one of her baby dolls from here, so we are taking that. She’s a good kid. She doesn’t want for anything at either house.”

Helms says he’s been overwhelmed by the quick outpouring of support. Within 30 minutes of his first post on social media Monday, employees of Angel’s Pools in Lexington dropped off toilet paper, diapers and wipes.

“I can’t be more grateful to people in Rowan and Davidson counties who have reached out to me personally,” Helms says. “I won’t have enough time to personally thank everyone who has reached out, but I’m going to try. Sometimes, when you work in law enforcement, you lose faith in people. But then something like this happens, and then everybody comes out of the woodwork to help.”