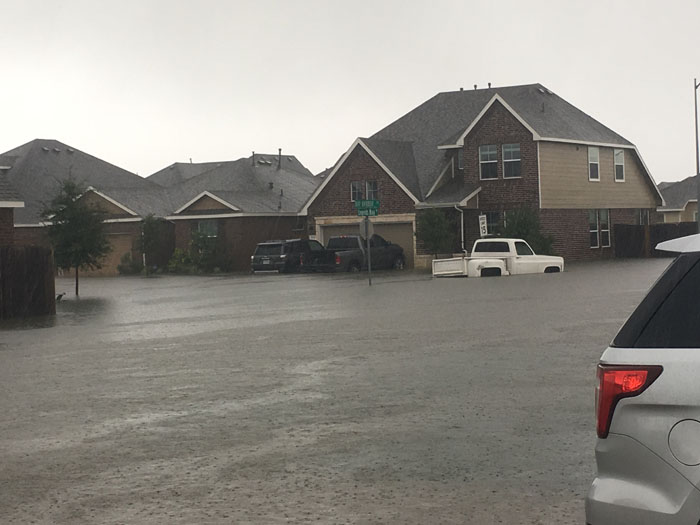 The Grishams' neighborhood in Mont Belvieu, Texas, is among those flooded .

When the sun rose Sunday morning, Jessica Karriker Grisham’s east Texas neighborhood was flooded. She and her family had to be evacuated by boat.

Grisham grew up in Salisbury and now lives in Mont Belvieu, Texas, 45 minutes east of Houston. Since evacuating, she and her family have been staying with friends about 15 minutes away.

Grisham’s parents, Dave and Debbie Karriker, live about an hour south of them and are fine, she said Monday afternoon.

“They just can’t get to us because the roads are flooded,” she said.

Grisham said she did not expect as much water as they had in their neighborhood.

“We thought it would drain, but it didn’t. Our neighborhood was under water. Everything on the first floor of our house is ruined,” she said.

Although the experience has been “super stressful,” Grisham said that everything damaged — furniture, appliances, clothing and at least one vehicle — can be replaced. The family was able to travel by boat to their neighborhood and retrieve clothing and other items from the second floor. Grisham and her husband, Timothy, have two children, son Nolan, 5, and daughter Cadence Helms, whose 11th birthday was Monday.

“The kids are taking it as best they can,” Grisham said. “They’re going with the flow. All of their stuff is safe. Their teddy bears are dry.”

“We’re gonna wait until it kinda calms down and then have a party for Candace in a couple of weeks,” she said. “I don’t foresee them going to school this week.

“Everything can be replaced. It’s going to be a pain, but we’ll get everything cleaned up. We’re not gonna worry about it right now.”

Grisham and her friend Brittany Barnhardt — who still lives in Rowan County — were co-workers at Rowan Rescue and Rowan EMS. Ironically, Barnhardt said, seven years ago on Monday, the two were part of a group doing swift-water training on the Nantahala River.

Along with Grisham, other former Rowan County residents living in Texas and those with other local connections are getting a firsthand look at the flooding there following Hurricane Harvey’s landfall this weekend.

David Barlow, a chaplain driver with Samaritan’s Purse, was on his way to Victoria, Texas, on Monday afternoon, near Corpus Christi. He was going to set up a base camp at a local church that is partnering with the organization. Barlow is a firefighter and EMT with Locke Fire Department and is also a retired teacher who started the fire academy at Concord High School in 2008.

After that, he said, the chaplaincy opportunity presented itself. He’s been on 16 such deployments in the past two years. Barlow and others on the team left early Saturday morning from the Billy Graham Library.

“We ran into our first rain band yesterday,” he said by phone Monday afternoon. “The rain was definitely tropical and a lot of breeze. Today it’s been overcast. We’ve seen lots of swollen river and washed roads.”

Barlow said three other vehicles ran into water-covered roads earlier in the day Monday, but that the waters should be receded by the time he passed along the route.

Barlow has been in fire service for 38 years. Before that, he participated in mock disasters and search drills as a Cub Scout and Boy Scout. “So I’ve been doing this a long time.”

Barlow lives in Landis with his wife, Debbie. They have three adult children. Barlow said he expects to be away at least two weeks, but that Samaritan’s Purse will have a presence in Texas likely through October.

Barlow and Mike Mattingly, based in Mecklenberg County, were the two chaplains deployed from North Carolina. Mattingly, operations and deployment manager for Samaritan’s Purse, said Monday afternoon that many other chaplains nationwide will join them in the next couple of days.

“We will be working with people in shelters,” he said. “Eventually, we will get in communities and help them clean up their homes, but that’s not the priority right now. Most of us are retired. We don’t do this for income; this is our ministry.”

He added of the flooded areas, “It is a complete mess now.”

The Rev. Richard Rhoades, a former pastor of Kimball Lutheran Church in Kannapolis, is now pastor at First Lutheran in Galveston. He said in a Facebook video Sunday that although the island was OK, parishioners on the mainland were experiencing flooding. He said fellow parishioners had offered housing to those who need it.

The church was also in the process of opening an emergency shelter Sunday at its retreat center.

“I hear the chili is already on,” he said.

Rhoades and two church members posted a brief devotional time, since the congregation canceled its weekend services. One member — dressed in suit and tie — even brought his offering.

China Grove native Dr. Tim Michael and his family live in Galveston, Texas, near the bay. He is a 1984 graduate of South Rowan High School and a 1988 graduate of the University of North Carolina at Charlotte.

“The thing that people don’t get is there is no inland here,” he said late Monday afternoon. “Everybody lives on the water. Everybody here lives next to a creek or river, but all of these things are full. That’s the issue.”

Michael and his wife, Dr. Melissa Williams, have two children, Eric, 14, and Sara, 10, and have evacuated during other hurricanes. They decided to shelter in place this time, he said. “Staying made more sense to us.”

Their home was one of the last ones built in their neighborhood, so it’s on higher ground, although Michael said the water was about 4 inches from their front door. “It’s still raining, and we’re going to get the hurricane again, and we’ll have rain through the weekend. We’re expecting another 15 inches of rain. This time, we figured we’d better stay here to mitigate whatever happened,” he said. “If a hurricane hits, you can’t get back in your neighborhood.”

Michael said that all the nearby bayous and creeks have passed the 500-year flood stage and that the storm surge was not expected until today or Wednesday. “You can’t really plan for a 500-year flood level. But we have good drainage and we have good power, although all that could change instantly.”

Michael and his wife teach at the University of Houston Clear Lake. The university is closed until at least Wednesday, he said. “Last week, they closed the schools for this entire week. That’s gotta get your attention. The kids may not get back in school for weeks.”

Robin Sane Craig lives with her husband, Derek, in Kyle, Texas, just south of Austin. She lived in Rowan County during her school years and is a 1984 South Rowan graduate.

“Where we are, it’s been raising for about three days,” Craig said Monday during her lunch break. “We’ve had big winds. Schools in Austin were on a two-hour delay. Farther east, there’s more flooding and, of course, Houston is under water. It’s a historic flood.”

On Monday, Craig was able to commute to her job 25 miles away.

Craig says that Texans are getting help from outside the state, and they’re helping one another. Houston Texans’ J.J. Watt quickly met his goal of $200,000 for a flood relief fundraiser, then upped the goal to $500,000. A local grocery store, HEB, sent food convoys, and the Cajun Navy came from Louisiana with rescue boats, Craig said. A local Girl Scout group in her neighborhood is collecting books for libraries destroyed by the floods.

“Books are near and dear to my heart,” Craig said. “So that’s been pretty cool. We have natural disasters here. We’re used to flooding.”

The heavy rains have caused a recently repaired leak in their roof to reappear, Craig said, “but that’s nothing. We’re inconvenienced, but we haven’t lost our home or a family member.”