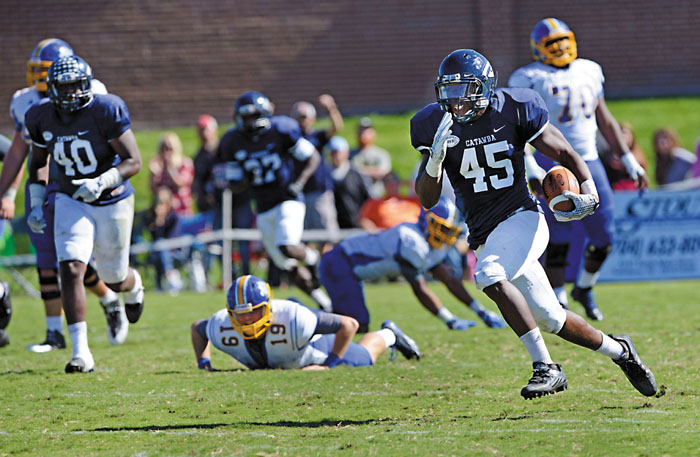 Wayne Hinshaw file photos/for the Salisbury Post ... One of Catawba’s defensive leaders: Linebacker Kyle Kitchens. The Indians open the season on Thursday night at home, against St. Augustine’s at 7 o’clock.

SALISBURY — There’s a thin line between winning a crown and getting knocked down, and Catawba football took a tumble in 2016.

It’s not like the Indians suddenly got awful, but if it could go wrong last fall, it did. Key injuries damaged the offense. As stingy as the defense was at times, it fell apart at others. After nine wins and hoisting the South Atlantic Conference championship trophy in 2015, Catawba settled for 5-6 and some long looks in the mirror.

That 5-6 could’ve been 9-2 with a few breaks here and there, but Catawba didn’t get it done against Winston-Salem State, Tusculum or UNC Pembroke and endured a weird, weather-related loss to Limestone. With Catawba’s strength of schedule, even 7-4 probably would’ve been enough to make the playoffs, but the Indians fell short.

“We played a tough non-conference schedule, and there were some hardships from that,” Catawba head coach Curtis Walker said. “All the games are important, and we’ve got to win some of those non-conference games this time.”

Walker, 26-19 in four seasons and 18-11 in SAC contests, said the theme for a season that starts at home on Thursday at 7 p.m. against St. Augustine’s is unity.

The good news is that 2017 won’t be a rebuilding season.

Catawba was picked fourth in the SAC preseason poll behind defending champ Newberry and two teams Catawba beat last season — Wingate and Mars Hill — but it will be a surprise if the Indians don’t at least challenge for the league title and a return to the Division II playoffs. Catawba’s linebacking corps could be the best it’s had since the glory days of (1999-2002) and the Indians are potentially one of the SAC’s better offensive teams. There aren’t any glaring trouble spots.

“When I got here (2013), we were playing five, six, seven true freshmen,” Walker said. “We don’t have to do that now. We’ve built depth to this program.  Now our guys have some time to mature and develop, and that’s what it takes to  compete at a high level.”

“We want to make sure everybody, and that’s offense, defense and special teams, plays as one,” Walker said. “I think our guys have grasped that idea.”

Patrick O’Brien, a Mooresville guy who had great success at UNC Pembroke last season (2,992 passing yards, 22 TDs), transferred to Catawba for his final year of college football. Ironically, one of O’Brien’s best games last season was a 383-yard, four-TD day that beat Catawba.

Still, O’Brien enters Thursday’s home game with St. Augustine’s as No. 2 on the depth chart because incumbent Reid Carlton (1,007 passing yards, six TDs) toughed it out and played hurt last season and hasn’t done anything to warrant losing his job. Carlton was electric in the Spring Game (five TD passes) and has the advantage of familiarity with offensive coordinator Kevin Brown’s system.

“Reid is doing a great job operating our offense and has never looked sharper,” Walker said. “There’s still a language barrier for Patrick as far as some of our offensive terminology, but he’s a fine quarterback. It’s been a battle. We’ve tried to give them equal reps.”

Put it this way. Catawba is in great shape at quarterback. If Carlton, a junior, does hold off O’Brien for the starting job, he’ll be first team All-SAC. If Carlton suffers an injury or slumps, it’s going to be a real asset having OBrien ready to step in.

No. 3 on the depth chart is true freshmen Ken Avent III. If Carlton and O’Brien stay healthy, Avent will be able to redshirt.

“Eamon’s running low and he’s a load to bring down,” Walker said.

Sam Mobley, who had 31 catches and averaged 21.4 yards per reception, returns as a big-play threat and should be one of the SAC’s best.

Keyon West has never been the main target for Catawba, but he’s quietly moving up the all-time receiving list.

“I told him he needed to make himself relevant, but then I looked at the stat sheet and realized he has been relevant,” Walker said. “I had to apologize.”

West quietly had 43 catches as a junior.

Floridian Gavin Rose figures to be the other starting wideout. He’s got speed. The name to know as far as the newcomers is junior college transfer Will Sweeper.

Walker has four tight ends he’s comfortable about using in various sets. The most familiar name in that group is 6-foot-3, 230-pound junior Jourdan Osinskie.

Brennan Lambert. a first team All-SAC preseason pick after a strong freshman year, decided not to play, but Lee Brackman kicked a 42-yard field goal last season and is proficient on kickoffs.

“Lee is kicking it in the end zone 85 percent of the time,” Walker said.

Caleb Berry is an experienced punter. Mobley is a dangerous punt returner, with Greene and Rose serving as the deep returners on kickoffs. Nick Chandler and Tyler McHargue are the snappers.

Cameron Davis and Ryan Watts are proven ends. Jordan Hemingway, who is on the preseason All-SAC team, returns at nose guard, to anchor a 3-4 defense. Trevor Bembry, returning from a knee injury, was a force before he got hurt. Freshman Cameron Miller and junior college transfer Omar Staley will be important. Staley’s aunt is Dawn Staley, South Carolina’s women’s basketball coach and a three-time Olympian.

“There are already a few championships in his family,” Walker said.

Catawba will miss outside backer Jamal Lackey but still has three standout linebackers in outside backer All-American Kyle Kitchens and inside backers Michael Peppers and Trey Evans, who was first team All-SAC last season. Any of those three is capable of taking over a game. Evans and Peppers had 73 tackles apiece last season to rank in the SAC’s top 10. Kitchens had 8.5 sacks.

“I wish I’d thought to get a picture of Lackey with those three,” Walker said. “That was the best linebacking corps at Catawba since Todd McComb, Darris Morris, Shawn Sanders and Shawn McBride were winning awards.”

Sanders and McComb made All-America teams.

Walker doesn’t expect any drop-off at linebacker with talented Isaiah Huffin, a junior who comes to Catawba from Louisburg, stepping in for Lackey.

The top backups at linebacker include a couple of locals (North Rowan’s Eric Gibson and East Rowan’s Joshua Moses), as well as DiJonne Williams and L.J. Melvin.

It won’t be easy to replace departed Case Woodard, who turned some games around for the Indians with big plays, but the Indians have two solid secondary starters back in safety Jeremy Addison and cornerback Cris Page, who had three picks in 2016.

T.J. Lowe, a transfer from Georgia Military, and Trey Murray, a redshirt freshman are expected to be starters.

Senior D.J. Jackson has been in the fire before, but most of the depth will be provided by junior college transfers.