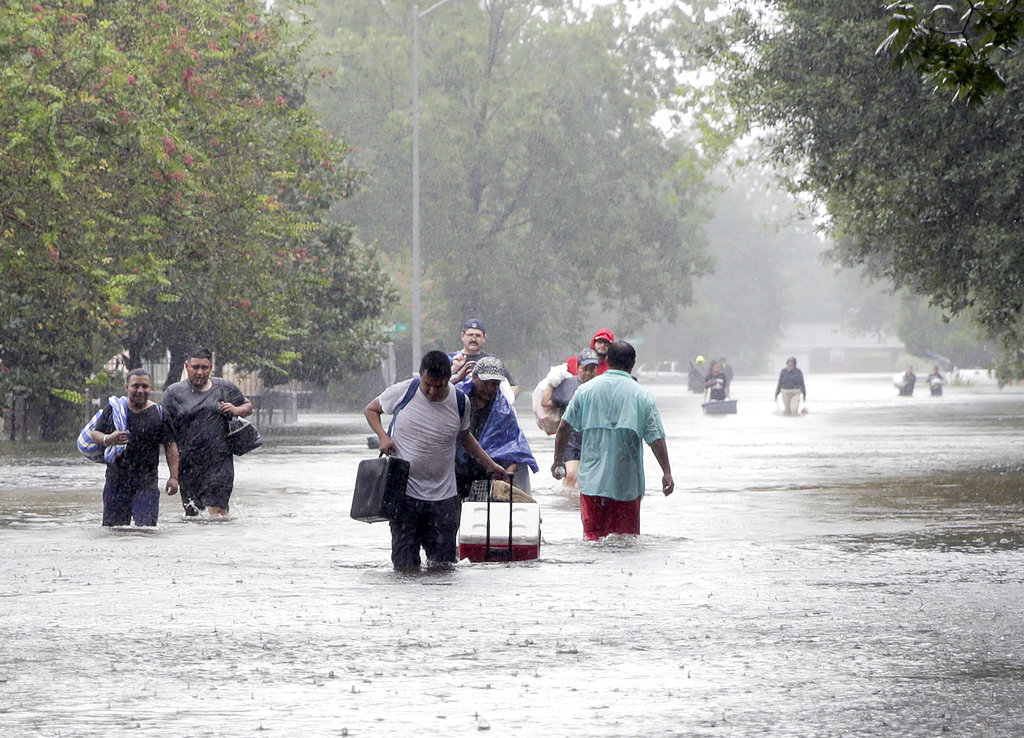 Houston residents walk through flooded streets with their belongings as Tropical Storm Harvey makes its way through the area recently. (Elizabeth Conley/Houston Chronicle via AP)

Many Louisiana politicians and public officials stood before microphones the week after Hurricane Katrina, but no public official spoke with the brevity and clarity that then-State Rep. Karen Carter did when she said that New Orleans had but two needs: “Buses! And gas!” Everything else was of no immediate concern, she said. Nothing should come before “Buses! And gas!

Unfortunately, for many of our neighbors in Houston, neither buses nor gas would currently be of much help. After Hurricane Harvey, a Category 4 storm, made landfall between Port Aransas and Port O’Connor Friday night, it dumped several feet of rain in some parts of Southeast Texas. As of Sunday, all of the highways that lead out of Houston were under water and, thus, impassable. Residents of our country’s 4th-largest city and the 5th-largest metropolitan area found themselves surrounded by water and stuck even as the rain continued to fall.

Even though “buses and gas” wouldn’t help Texas now, the sentiment behind what Rep. Carter said then still applies. Rescue efforts take precedence over everything else. When people are climbing onto their rooftops to escape rising water, nothing short of rescue benefits them. The Louisiana boaters who call themselves the “Cajun Navy” grasp that. After rescuing people who were trapped in last year’s 1,000-year rain event in and around Baton Rouge, many of those same people are now in Texas, helping residents there deal with their own 1,000-year rain event.

Hurricane Katrina made its Gulf Coast landfall before dawn on Monday, Aug. 29, 2005. The state representative made her “buses and gas” plea on Friday, Sept. 2. Between that Monday and that Friday, there were people around the country who had already decided to launch into discussions about what New Orleans needed to do, about what New Orleans should have done. In addition to those who ridiculed New Orleanians who didn’t or couldn’t evacuate, there were people who argued — when people were still on their rooftops, mind you — that it wasn’t in America’s best interest to rebuild New Orleans.

So it’s fair, I think, to think of Carter’s distillation of the city’s needs as not only a response to people who wanted to know how they could help but also as a response to people who believed that week was a good time to have philosophical discussions about where cities should and should not be built or philosophical discussions about what government officials should or should not do as storms approach.

Ahead of Harvey, Houston Mayor Sylvester Turner discouraged residents from evacuating. Because so many people have become trapped, some people think Turner’s decision was foolish. Because so many people died in 2005 when Houstonians tried to flee before Hurricane Rita, some people think Turner’s decision was quite wise. But that debate is best left for another time. Nobody in Houston will be helped by us having that discussion now.

Houston needs what the Cajun Navy is now doing its best to provide: boats and gas.

We’ll have plenty of time to talk about other things once everybody is rescued.

Letter to te editor: May 17