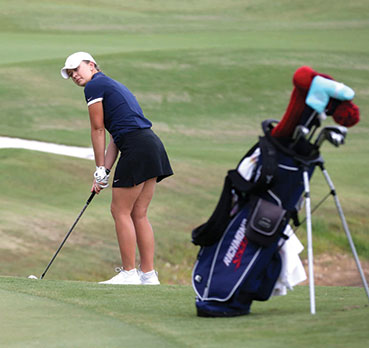 SALISBURY — The thing about golf, even when you’ve accomplished as much as University of Richmond junior Isabella Rusher has, is that you never know what the next round will bring.

It was early in the spring portion of her freshman season— actually, the calendar insisted it was still winter — and Rusher was competing in the final round of the Edwin Watts/Kiawah Island Spring Classic in South Carolina. Her first round had been decent for her, a 76, while her second-round 82 had been a bogey-filled, confidence-draining disappointment. But Rusher’s mental tenacity is legendary, and in Round 3 on the Osprey Point Golf Course, everything fell into place.

Straight drives. Precise irons. Putts falling. She made it look as easy as she did when she was winning championships at Salisbury High. She made four birdies and one bogey, shot 69, tied the school record.

“I hit the ball well all day, of course, but mostly I just remember walking off the course and wanting to cry,” Rusher said. “I’d finally shot 69, and I was in a state of shock.”

Rusher’s second 69 was less shocking. It came four weeks later when Richmond played in the Kingsmill Intercollegiate in Williamsburg, Va. This time the 69 came in the first round. She finished seventh in the tournament, the third top-1o finish of her freshman season, but things weren’t perfect. After that sizzling start, she’d finished the tournament, 77-82.

“The plan has always been to be consistent, and while I’d shot those 69s, I still hadn’t found consistency,” Rusher said. “Go out and shoot even-par for three rounds. That’s the dream.”

As a freshman, Rusher was the second-best golfer on a team good enough to win the Patriot League championship and compete in an NCAA regional hosted by Stanford. Her stroke average was 78.3, but she wanted to do more and knew she was capable of more.

Rusher made progress as a sophomore, and last fall, on Sept. 24-25, at the Nittany Lion Invitational in State College, Pa., she located that elusive consistency. She made 42 pars in two days, shooting 70-74-72 — 216. She finished at even-par to win by one shot. She was only the fifth individual medalist in school history. The 216 was the third-best tournament score in school history.

Maybe the best part of that story was that Rusher, even though she was playing in the final group, didn’t realize right away that she’d won.

“I was a little confused with two of the names on the leaderboard that were similar, and I thought I’d finished one stroke behind, instead of one stroke ahead,” Rusher explained sheepishly. “I came off the course and told my dad that I was sorry, that I’d tried my best, and he was laughing. He was like, ‘What are you talking about? You won.’ That win meant a lot because there’s always that little voice inside your head telling you that maybe you’re not good enough to win.”

College golf is split into fall and spring seasons, and Rusher continued to perform at a high level in the spring of her sophomore year. She was the Patriot League Golfer of the Month for March. She was Richmond’s best golfer for the season, with an average round of 76. She didn’t fire any 69s as a sophomore, but she reduced her bogeys. She had three top-10 finishes and led Richmond to another conference championship and to the NCAA Regional in Lubbock, Texas.

“You set goals every year, and I accomplished a lot of them,” Rusher said. “Winning a tournament, proving to myself that I could win a tournament at this level, was big. Improving my stroke average from my freshman year to my sophomore year as much as I did was exciting. I’m sure I played the best golf of my life last season. I’m getting closer to that goal of even-par.”

Rusher won just about everything you can win as a Salisbury Hornet. From 2011-14, Rusher was a ringleader as the Hornets blew away the state in the 1A/2A ranks, taking four straight titles by landslide — by 33, 60, 57 and 42 strokes.

Rusher won individual state championships in 2011 and 2012 and was runner-up in 2013 (to Elkin’s Annika Winebarger) and 2014 (to teammate Grace Yatawara). When she signed with Richmond, Salisbury coach Dale Snyder declared Rusher was “the one that kind of catapulted us from good to great,” and that was a good way to put it.

Despite all those championship rings, Rusher has never been consumed by golf. Her decision to go to Richmond was partly because she liked the coach (Ali Wright) and because she had a best friend (Cannon School’s Annie Collum) headed to play golf there, but mostly her choice was education-based.

“I did well in golf in high school, but the main reason to go to Richmond was to get the education that could set me up for a great job,” said Rusher, who is a business major with a concentration in finance. “I think I really got lucky. I’m playing Division I golf and I’m having some success at it, and I’m getting to do that at a school that I really like.”

Rusher’s biggest adjustment to college golf has been an increased fitness level. The format is usually three rounds in two days, and handling those 36 holes on the first day, whether it’s cold or steamy, have led Rusher to prepare more strenuously in the off-season. Mostly, she swims.

Part of Rusher’s experience as a Richmond golfer was a trip to Ireland during fall break last year. She also spent two months in Australia this summer, interning at a business. She got to visit New Zealand and Bali while she was Down Under, but her golf clubs didn’t make the trip.

“Everyone asks me if I played golf while I was in Australia, but this summer was all school,” Rusher said. “I love golf, but it’s still important to give yourself those breaks from golf.”

Rusher headed back to school on Aug. 24. The start of her junior season is just around the corner.

She’s happy and if she had the recruiting process to do over again, there’s no doubt she’d still choose Richmond.

“It’s been the right fit for me,” Rusher said. “Playing golf takes a lot of time, but the sport has never been any sort of burden. I’ve been able to enjoy being a college student. There’s always been time for fun experiences and to make lasting memories.”