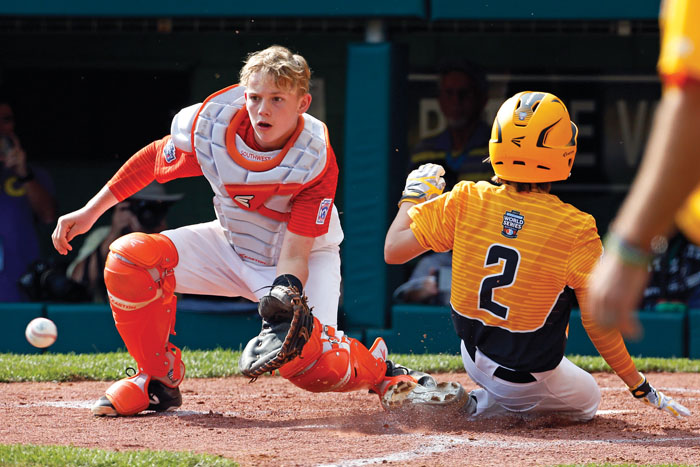 SOUTH WILLIAMSPORT, Pa. (AP) — Rounding second base with big strides, Mark Requena knew he had just given his teammates, and all of Texas, something to smile about.

Requena hit a two-run, go-ahead home run in the sixth inning and Lufkin, Texas, overcame a five-run deficit to beat Greenville, North Carolina, 6-5 on Saturday and earn a spot in the Little League World Series championship.

Greenville was previously undefeated in the tournament, having given up just one run and one hit in three games — both to Lufkin, in a 2-1 victory Wednesday — before things changed in a hurry in this one. Pinch hitter Clayton Wigley’s two-run homer to center started the rally for Lufkin in the fourth inning.

Lufkin will face Japan, which cruised through the international bracket and shut out Mexico 5-0 earlier Saturday, in Sunday’s championship.

Players and coaches said the comeback meant a little bit more knowing that Texas, including Lufkin, about 120 miles northeast of Houston, was being battered by Hurricane Harvey and needed some good news.

“Lufkin is our hometown and we love Lufkin, so we want everybody to be safe so we can come back and they can congratulate us,” second baseman Malcolm Deason said.

Lufkin fell behind 5-0 to Greenville in the third when JoeJoe Byrne hit a two-RBI single, then scored on Chase Anderson’s groundout to second.

The Southwest region champs started chipping away at the lead in the fourth inning with Wigley’s home run.

“We talked earlier that we wasn’t out of the ball game,” Lufkin manager Bud Maddux said. “We was going to win this ball game. I got confidence in these guys. We’ve been down before and fought back and they played their hearts out and we did it again.”

Deason made it a one-run game in the fifth when he hit an RBI single, then scored on a wild throw by the catcher, Bryce Jackson, who tried to catch Deason stealing third.

Despite the loss, Greenville manager Brian Fields said he was delighted with his team’s performance, and that his players will give the consolation game against Mexico their all.

THIS BUD CAN COACH: Maddux has been coaching youth baseball for 41 years and has led his teams to 10 championships at various levels. This year is his first appearance at the LLWS — and he has made the tournament final.

NOT-SO-MELLOW YELLOW: Japan’s fans are known for nonstop cheering but Greenville’s section, decked out in the team’s yellow jerseys, were rowdy, too. As pitcher Carson Hardee kept a lid on Lufkin early in the game, Greenville fans made some noise chanting: “Three up! Three down!” and “South! East!” To their credit, they chanted “South! East!” again when their team left the field after the loss. After the game, Lukin fans tried out a new cheer: “U-S-A! U-S-A!”

SOUTH WILLIAMSPORT, Pa. (AP) — It took only one batter to send Japan on its way to the championship game of the Little League World Series.

Keitaro Miyahara smacked a leadoff home run to left-center, capping a nine-pitch at-bat and powering Japan past Mexico 5-0 on Saturday for the international bracket title.

Miyahara, 6 for 12 in the tournament, slipped coming out of the box before sprinting around the bases, giving a little fist pump at third.

“After the first home run off this opposing pitcher, the momentum changed,” Japan manager Junnji Hidaka said through an interpreter. “Once one of our hitters got a home run off of him, we believed we could hit off him. That’s a very good pitcher that we faced.”

in the U.S. championship. If Japan wins, it will be its fifth championship in eight years and 11th overall.

Tokyo Kitasuna, the club representing Japan this year, has won the championship three times, most recently in 2015 when it was also managed by Hidaka.

Mexico unraveled after Miyahara’s blast, giving up three more runs in the first.

Japan loaded the bases thanks to a dropped third strike, a throwing error by pitcher Jorge Garcia and a walk before Yuya Nakajima grounded a two-run single through the left side.

Another run scored on a wild pitch before Garcia escaped further trouble. By that time, he had thrown 39 pitches. Little Leaguers are allowed 85 in a game.

Japan pitcher Riku Goto tossed 5 2/3 shutout innings and struck out 13, the most for a pitcher in a game this tournament. “All I thought about was throwing a shutout,” he said through an interpreter.

Miyahara relieved Goto for the final out after the starter reached the pitch-count limit.

Goto helped his own cause in the fifth inning by singling in a run.

MR. OCTOBER FALTERS IN AUGUST: Hall of Famer Reggie Jackson threw out the first pitch, and it wasn’t pretty. He wound up and bounced the ball a few feet in front of home plate.

STRIKEOUT STUFF: Despite his first-inning struggles, Garcia still featured plenty of put-away pitches in his two-plus innings of work. He had seven strikeouts, including the dropped third strike following Miyahara’s home run.

Matt Martell is a journalism student at Penn State. Penn State is partnering with The Associated Press to supplement coverage of the 2017 Little League World Series.