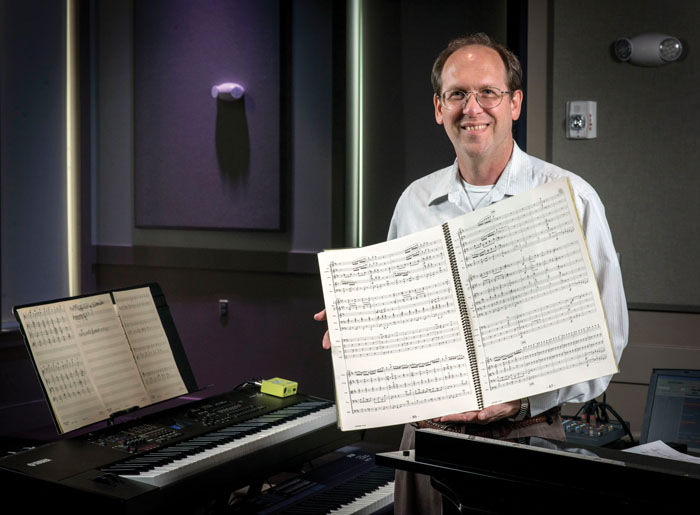 JON C. LAKEY / SALISBURY POST St. John's Lutheran Church will be the location of a special concert performance by the Salisbury Symphony to tie in with the 500th anniversary of the Reformation. The Symphony will perform Felix Mendelssohn’s Symphony No. 5 in D Major, the Reformation Symphony, and the last movement of Salisbury composer Davis Brown’s Symphony No.1.

The Salisbury Symphony will premiere local composer Davis Brown’s Symphony No. 1 in D Major at its Sept. 23 concert.

The concert will take place at 7 p.m. in the sanctuary of St. John’s Lutheran Church, 200 W. Innes St., in Downtown Salisbury, where Brown is an active member of the music ministry. The symphony will perform the third movement from Brown’s symphony, originally drafted in 1990. They’ll also perform Mendelssohn’s Reformation Symphony.

“A milestone of this magnitude deserves a performance of this magnitude,” says the Rev. Rhodes Woolly, St. John’s senior pastor. “Mendelssohn’s Reformation Symphony is stunning, and Davis’ composition sits beautifully right next to it.”

Brown, 50, has been composing music for 40 years, and says the first draft of Symphony No. 1 was in celebration of the unification of Germany after the fall of communism. He eventually laid the work aside, and got to know the director of a community orchestra in St. Louis, where he was teaching. Brown is a professor of political science, who at present is conducting research work for a couple of organizations. He has a PhD in international relations but no formal degree in composition.

“The director asked me to re-orchestrate the piece a little to accommodate the orchestra,” he says. “Later, I thought, why not redraft it entirely as a tribute to the 500th year of the Reformation. It sits very well with a piece already with a German theme. So that is what I did.”

He showed the work to Rob Durocher, St. John’s minister of music, and then the two of them showed it to Maestro David Hagy as a possibility for the upcoming concert.

“Rob and David agreed to perform the third movement,” Brown says, “which is how it got on the program.”

Like other pieces in the concert, Brown’s piece includes Martin Luther’s famous hymn, “A Mighty Fortress.”

“It’s not the main theme,” Brown notes, “but it does appear recognizably in the middle, and then is quoted at the end.”

Brown says that the revisions took as long as the original composition — four months each. “I basically started over.”

Brown says that composition has come a long way, thanks to notation software. “These days, in theory, I can do things faster with the computer software. Sometimes it’s not faster, but it’s a heck of a lot easier to read.”

Composing is a creative process, and Brown says it’s good to do a little every day. “But there are times when the muse owns you and the creative juices are flowing. But writer’s block unfortunately happens to composers, too. Sometimes you put an hour’s worth of work into it, and other days you might spend 10 hours on a piece.”

Brown says he usually has a pretty good idea of where he wants to go with a piece, constructing it from the beginning to the end. “Sometimes I will write something and it looks like on paper it would work. Then I do a mini-recording and it doesn’t sound right, or it sounds emptier than I thought. So then I tweak the orchestration, changing a note here or there to get the effect I want. But my first path through, I usually get about 97 percent of its final form.”

What makes that possible, he explains, is thinking through a piece before he puts notes on paper — or the computer.

“It’s the brain work phase,” Brown says. “Some would call it marinating. I let a piece of music marinate in my brain and let it develop naturally. In a week or a few days, an idea will come at a random moment, in the car or at my desk. You find that the oddest places are sources of inspiration for a new piece of music.”

Brown is also at work on a ballet, a trilogy called “The Robber Princess.” He’s performed with the St. John’s Men’s Chorus, and plays keyboard each week at the 9:27 contemporary worship service.

As for the symphony premiere, he says, “obviously it’s going to be exciting. It’s exciting for any composer to have a premiere in the place where he lives. This is the first time that a work of mine has been performed by the Salisbury Symphony. So it’s rather fortuitous.”

For the symphony, it’s a chance for its musicians to leave the concert hall and go out in the community, says James Harvey, executive director of the Salisbury Symphony. “We are honored to be asked to take part in the collaboration with St. John’s. It’s outside our regular season, but it’s a key event in our calendar. St. John’s is a wonderful organization which strives to make our community an artistically vibrant place.”