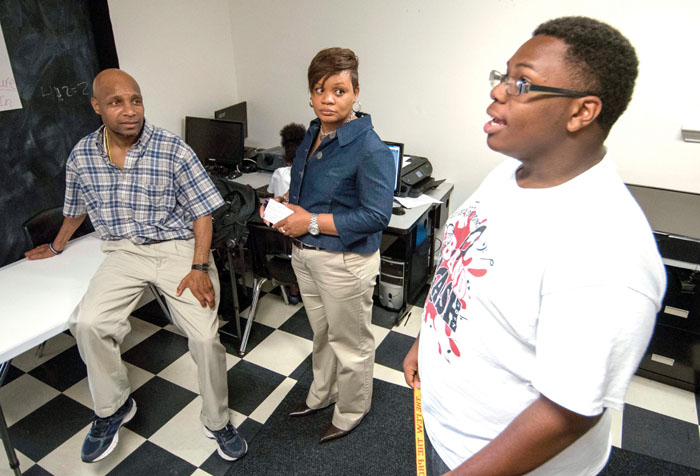 JON C. LAKEY / SALISBURY POST Alex Clark (left) , founder of COMPASS, and Alisha Byrd (middle) , founder of Gemstone Academy listen to Jared Wallace (right) make comments about the youth program he attends. Gemstones Academy and COMPASS, a nonprofit organization founded by Alisha Byrd and Alex Clark, with the mission of provide youth with the skills to reach their maximum potential by discovering their gifts, talents and abilities. Gemstones Academy offers their service to girls and young women where as COMPASS is offer to boys and young men. COMPASS stands for Confident, Optimistic, Motivated, Persistent, Assertive, Studious and Successful. Tuesday, April 11, 2017, in Salisbury, N.C.

SALISBURY — After turning his life around, Alex Clark is fighting to stay alive.

Clark, 47, is a community advocate who uses his criminal history as a cautionary tale for local young men. Now, he’s fighting for his life in a battle against ALS or amyotrophic lateral sclerosis. It’s also called Lou Gehrig’s disease. Clark began experiencing symptoms associated with the disease more than two years ago. In fall 2015, he learned the exact nature of his health problems.

ALS affects nerve cells in the brain and spinal cord. It affects motor functions and, eventually, a person’s ability to speak, eat and breathe.

The disease has begun to take its toll on Clark. Moving is much more difficult than it’s ever been. He’s also lost a significant amount of weight. At one point, Clark said, he weighed 170 pounds. Clark, who is five feet eight inches tall, says he currently weights about 140 pounds.

Now, Clark hopes to raise $50,000 to pay for stem cell treatment. If more treatment is needed, he may need to raise more money. A fundraiser for Clark will be held Sept. 9 at 7 p.m. at Livingstone College’s Hospitality and Culinary Center on Jake Alexander Boulevard. He also started a fundraising campaign on the website GoFundMe.

Clark first remembers experiencing symptoms associated with the disease while exercising. It became hard to move his leg. He likened it to limping.

Physical manifestations of the disease have advanced considerably since that time. During an interview, Clark showed that he cannot lay his hands flat on a table without pushing his fingers down.

But physical challenges have not been the most difficult part of ALS, Clark said.

He said telling family members he had been diagnosed with ALS was more difficult than any symptom. Clark first told his mother — Margaret Clark-Robinson. She asked him a question — was he afraid to die?

“‘You know how severe this is. You know you could die from this,’” Clark recalled his mother saying. “I told her ‘I’m not focused on dying. I’m focused more on living.’”

Next, he told his two brothers, three sisters and two sons about his diagnosis.

Even with ALS, Clark remains committed to community advocacy through his mentorship program COMPASS. He was recently a speaker during the Game Plan for Life program through the Rowan-Kannapolis ABC Board. Clark’s mind is still sharp. His close friend Alisha Byrd, a school board member, says he hasn’t missed a day of work besides a trip to Chicago for a second opinion about his diagnosis.

“So, on days when I want to be lazy and sleep in, I have to remind myself that Alex got up and went to work,” Byrd said. “Not only does he inspire me, he motivates me and he encourages me to be better than yesterday.”

But Clark’s dire diagnosis has come to a critical point.

Medicine available will only prolong his life for three months. Clark said stem cell treatment is his best route. It could pause or potentially reverse ALS, he said.

He doesn’t ask for help often, but last week he announced the diagnosis to all of his friends in a post on Facebook. He also listed the dates of his upcoming fundraiser.

In the post, Clark said he was going to war against ALS and he needed people to fight with him.

“I know some of you that I work with in the community have probably taken note of how I walk now compared to then, to maintain the integrity of our relationship, the progression of ALS is the reason,” Clark wrote. “I’ve accepted my body is going through some serious changes, embraced the challenge, and I’m gonna show you what faith looks like in action.”

Responses came pouring in. Some people were angry, Clark said, because he hadn’t told them sooner.

“I’m in a position where I need people’s assistance and I really don’t know how to let people help me because I’ve always been a provider for my family and my friends,” he said. “To a degree, this is very foreign terrain for me.”

Clark said he doesn’t think much about the amount of time he has left to live. A doctor told him death could come soon, but Clark responded defiantly.

“I refuse to allow a man to put a timespan on my life,” he said. “Me and the creator are going to do what we are going to do until I can’t no more … That’s pretty much been it. So, when me and (the doctor) talk, we don’t have that conversation any more.”

Instead of thinking about death, Clark has focused on how he can beat ALS.

A change for the better

Clark’s ALS diagnosis is the latest chapter in a complicated life. Born in 1970, he’s lived most of his life in either China Grove or Salisbury. He graduated from South Rowan High School.

As a young adult, Clark worked a number of jobs, including: a bakery, tire company, telemarketing and running his own business. He also attended barber school.

During his early years, Clark also began accumulating a criminal history that he now uses when talking to children or teenagers about maximizing their potential.

His record includes charges such as assault and resisting arrest. It includes a number of traffic-related charges, too. However, it was a federal drug charge that created a critical change in Clark’s life. In 1996, he was convicted in federal court of conspiracy to distribute cocaine and crack, Clark served 18 years in prison. He was released in 2014.

During Clark’s time in jail, his son died because of cancer.

Now, he regularly speaks to young men about reaching their maximum potential by discovering their gifts, talents and abilities. He runs COMPASS, which stands for confident, optimistic, motivated, persistent, assertive, studious and successful. Byrd runs a partner organization called Gemstones Academy, which is for young women.

Joseph E. Levy III, a student at Kannapolis Middle School, is among the many young men learning life lessons from Clark. This year is Levy’s second as a member of COMPASS.

“(Clark) is there for us and so of course we are there for him now,” Levy said. “It is important for people to know that we need Mr. Alex and that the community needs him. He is important to all of us.”

“To have an organization that allows me to be comfortable as an African-American young man and embrace all that it is, is fun and educational,” he said.

Levy said Clark doesn’t hesitate to talk about his past.

County commissioners Chairman Greg Edds said Clark has a compelling story and uses that to make a positive change. Edds and his wife Kim are listed as hosts of the Clark’s fundraiser next month.

Salisbury City Councilman Kenny Hardin is also listed as a host for the fundraiser. Hardin said the two met shortly after Clark was released from prison.

“He was serious about redirecting his life and I’ll never forget something he told me: ‘I left nothing in prison that I need to go back for,’” Hardin recalled. “His life is a cautionary tale, and he does not shy away from the mistake he made and he talks to kids first-hand about how something can affect your life … He’s had a tremendous impact on the young people in this community.”

“It won’t be because I got back into that”

In his former life, Clark says, money wouldn’t be a problem. He could easily secure the necessary $50,000 to pay for stem cell treatment. But he’s abandoned that life.

“There’s only one way for me to do this, and that’s the right way,” he said. “I refuse to take my family through that again. And if it comes down to me expiring, it won’t be because I got back in that. For me to get back in the street, it would mean I would be in it to destroy the city again. That’s something I refuse to ever do again.”

For more information about Clark and his diagnosis, visit gofundme.com/fighting-als-with-alex-clark. Information about the Sept. 9 fundraiser can be found at tinyurl.com/alexclarkfundraiser.

The fundraising event will include dinner and live entertainment. The attire is semi-formal, and tickets are $50 per person. The event will be at 7 p.m. in the Livingstone College Hospitality and Culinary Center — 530 Jake Alexander Boulevard.

Rockwell “Back to School Bash” offers free entertainment and…