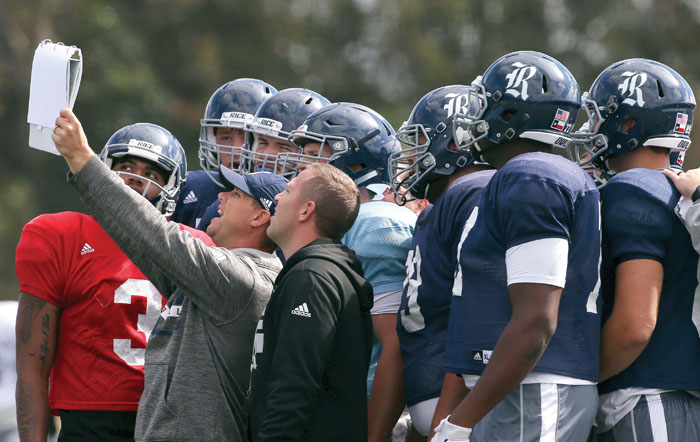 U.S. college Rice's football players get instruction for a running play as their team trains ahead of the season opening game against Stanford in Sydney, Thursday Aug. 24, 2017. The game will be played on Sunday. (AP Photo/Rick Rycroft)

SYDNEY (AP) — Rice University football players are using social media to check on news from Texas and Hurricane Harvey as they prepare for their season opener against Stanford on Sunday in Sydney.

The Houston university tweeted out  a video with Owls coach David Bailiff reflecting on the team’s experience with Hurricane Ike in 2008, which was the last significant hurricane to make landfall in the state and which devastated the Upper Texas coast.

“This morning we made sure all the coaches and their families … we reached out to them to let them know where to go, who has generators and who hasn’t,” Bailiff said in the video.  “We are trying to ease the anxiety of the coaching staff and the players.”

Rice football spokesman Chuck Pool said Saturday that the university’s travel partners were monitoring the situation concerning the team’s return to the United States on Monday. The team is scheduled to leave Sydney early Monday morning for Los Angeles, with a short layover scheduled there before flying on to Houston.

“Meanwhile, we just focus on getting the team ready for tomorrow,” Pool said

The Owls, who have been in Australia since Tuesday morning, play No. 14 Stanford at noon Sunday (Saturday night in the U.S.) at Allianz Stadium. Rice players and coaches planned several team meetings Saturday and had a walk-through at the stadium scheduled.

The National Hurricane Center said late Friday  that the eye of the Category 4 hurricane made landfall about 10 p.m. about 30 miles east-northeast of Corpus Christi between Port Aransas and Port O’Connor, Texas, bringing with it 130 mph (215 kmh) sustained wind and flooding rain.

Heavy rain and possible storm surges are forecast for the Houston area over the next several days.

Rams open new stadium with 58 points and a…