Rams open new stadium with 58 points and a win 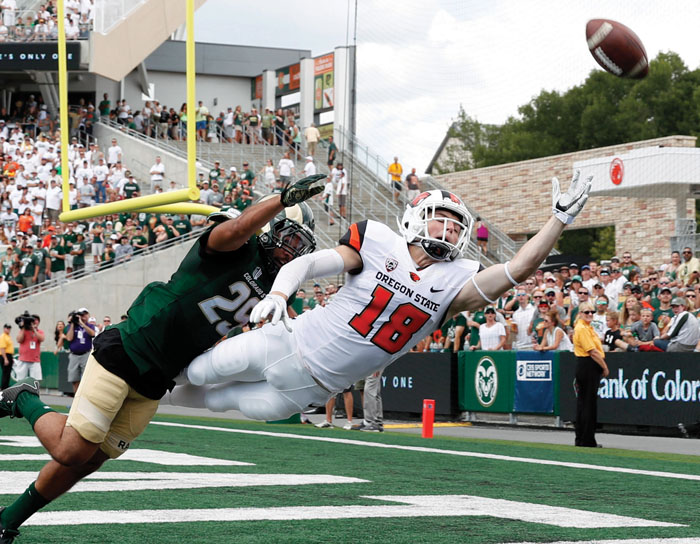 Oregon State wide receiver Timmy Hernandez, right, reaches out for a pass but misses the ball as Colorado State defensive back Justin Sweet covers in the first half of an NCAA college football game Saturday, Aug. 26, 2017, in Fort Collins, Colo. (AP Photo/David Zalubowski)

A big hit to the stomach early in the game from a linebacker will do that. He quickly got his second wind to help Colorado State make quite a first impression.

Stevens threw three touchdown passes, linebacker Tre Thomas scored on a 44-yard interception return to lead a Colorado State defense that forced five turnovers and the Rams launched their new on-campus stadium with a 58-27 win over Oregon State on a steamy Saturday.

Colorado State moved into its new digs after nearly five decades of playing down the road at Hughes Stadium. A raucous 37,583 fans showed up to catch a glimpse of the $220-million facility.

“I just told the guys in there — there’s only one shot at opening a new stadium,” said Rams coach Mike Bobo , who was hoisted onto his players’ shoulders in the locker room after the game. “There’s going to be one memory. It was a good one for Colorado State people.”

Stevens did his part to make sure it was a successful unveiling by throwing for 334 yards — his third career 300-yard game. A hit in the first quarter, though, left him shaken up and gasping for air.

“It felt like I wasn’t going to be able to breathe for another couple hours,” Stevens cracked. “Usually, a hit like that takes some of the breath out of you. But it took every ounce of breath I ever breathed. I had to focus on breathing after that. I got over it.”

The Beavers fumbled twice and threw three interceptions on the way to losing their 14th straight road game.

Oregon State’s Jake Luton finished 27 of 47 for 304 yards and two scores. He also threw three interceptions, including the game-changer in the third quarter. Thomas grabbed a tipped pass out of the air and raced 44 yards to make it 34-20.

“We got beat badly — badly,” Oregon State coach Gary Andersen said. “There are a lot of concerns when you get beat like that. It’s unchartered waters for me.”

For a while, all the “firsts” in the new stadium appeared to be going the way of Oregon State:

But Colorado State ended up earning the biggest first of all in its new facility — a win.

OREGON STATE: Andersen stressed the importance of the little things in winning on the road. Costly turnovers, missed receivers and allowing 48 points in the red zone added up to another road loss.

COLORADO STATE: Granted, it is very early in the season. But the Rams took a big step toward a run at a fifth straight bowl game. Their non-conference schedule also includes Colorado and top-ranked Alabama.

Colorado State director of athletics Joe Parker said he was so eager for the stadium opener that he arrived at 6:45 a.m. … Rams RB Dalyn Dawkins caught an 18-yard TD pass and scored on a 3-yard run. … Oregon State RB Ryan Nall rushed for 115 yards, including a 75-yard TD run in the second quarter. … This was Colorado State’s first football game on campus since Nov. 25, 1967, when the Rams beat Wichita State.

DON’T DO THAT AGAIN

Bobo wasn’t too pleased with Stevens attempting a jump pass near the goal line that was nearly picked off. The Rams ended up with a field goal.

“That was stupid. We’ve got points right there,” Bobo said. “Luckily, they didn’t catch it. That’s not a smart decision. He’s not Brett Favre.”

“We didn’t expect a 10-7 game. Nor that it would be a walk in the park. We expected a dog fight.” Oregon State coach Gary Andersen.

OREGON STATE: Hosts Portland State next Saturday. The Beavers are 4-0 all-time against the Vikings.