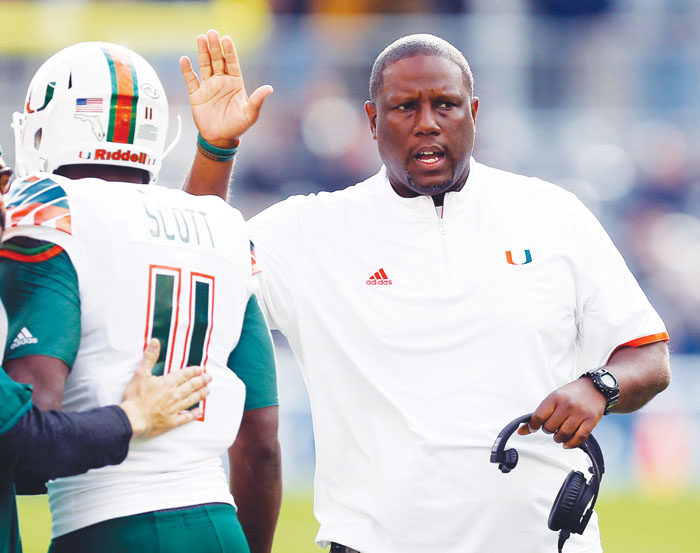 FILE - In this Nov. 27, 2015, file photo, Miami head coach Larry Scott congratulates Miami wide receiver Rashawn Scott (11) after the team scored a touchdown in the first quarter of an NCAA college football game against Pittsburgh, in Pittsburgh. Scott, named as offensive coordinator at Tennessee in January, has a tough task taking over an offense lacking experienced players. But he's faced bigger challenges than this. The Volunteers believe Scott's passion for the game and the experience he got as Miami's interim head coach in 2015 make him an ideal fit for this kind of assignment. (AP Photo/Keith Srakocic, File)

KNOXVILLE, Tenn. (AP) — This marks Larry Scott’s first season as Tennessee’s offensive coordinator, but he’s been preparing for this type of challenge since grade school.

That’s when Scott said he started thinking about the possibility of coaching. The interest increased through the lessons he learned on and off the field from Gary Rapp, who coached him in high school. He eventually found another mentor in Mike Canales, who coached him and later worked alongside him as a South Florida assistant.

“Probably very early I understood how important football was to me and what it had done for me,” Scott said. “I wouldn’t be here definitely (without football), probably wouldn’t have a college education. I probably wouldn’t have my family or any of those things. This game has been really, really good to me. Each and every day I come to work, it’s just me trying to give a little bit of what it has done for me back to these young men.”

That effort has led to this opportunity.

The departures of quarterback Joshua Dobbs , running back Alvin Kamara and receiver Josh Malone to the NFL leave Tennessee short on experienced playmakers . Scott has said he needs more “consistency and continuity” from his offense.

Then again, Scott has faced tougher tests than this one.

Scott was named Miami’s interim head coach in 2015 after the midseason firing of Al Golden. Up to that point, he’d never even been a college coordinator. Miami went 4-2 in Scott’s six games after posting a 4-3 record beforehand.

“It was one of the best experiences I could have ever had,” Scott said. “A lot of people always ask you, ‘How do you know you’re ready?’ Well, a lot of people don’t know they’re ready until they’re thrust into those positions.”

Canales said it’s no surprise to see Scott in this position. He said Scott displayed a rare passion for the game while at South Florida. As an offensive tackle, Scott was constantly asking questions. As a young assistant, he maintained that same enthusiasm.

“He loved talking X’s and O’s,” Canales said. “We had to force each other to leave the office late at night when we were with coach (Jim) Leavitt at South Florida because we just wanted to keep talking ball and watching film.”

Tennessee is downplaying how the coordinator switch could impact its scheme, though running back John Kelly said “we’re definitely a more versatile offense… and we’re playing faster.” The Vols likely won’t depart too much from the uptempo attack that helped them score a school-record 473 total points last season.

But there is a personality change as the Vols go from the 61-year-old DeBord to the 40-year-old Scott.

“Coach DeBo was a little older, so he could be a little more laid back at times,” offensive tackle Brett Kendrick said. “Coach Scott is kind of like in our face, which is what this offense needs.  We’ve got some young guys at some positions, so he’s in our face, but he’s really cool off the field. He’s there for us. He’s there to be our friend, but he’s also there to push us.”

That approach is necessary with so many new faces on offense. Jones has mentioned throughout the preseason that the offense is still struggling to establish its rhythm.

Scott believes a key to finding that groove is a willingness to adapt.

“The guys who try to stuff themselves into just being one thing and in one box ultimately will be the ones that end up having some issues with things not fitting and not flowing,” Scott said. “I think you have to have the ability to always look at how I can make it work with what we have and where we are. If you keep the focus on what it is you actually do well with the personnel that you have, you’ll always give the kids energy and juice and passion about what they’re doing.”