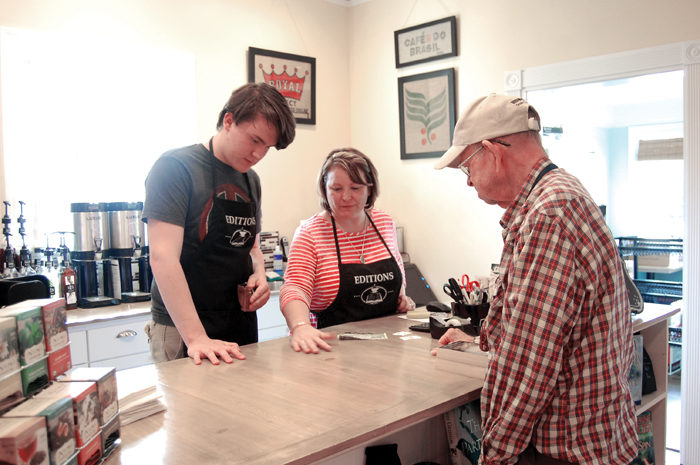 Dawn Evans and her son, Gavin, count up the money that customer David Mawyer uses to pay for his two books. Mawyer said that Dawn helped him find the two books and that he was "tickled to death" to have them. (Jessica Coates/Salisbury Post)

KANNAPOLIS — Before opening Editions Coffee Shop and Used Bookstore, Dawn Evans said that she had never made a “fancy” coffee beverage.

“I’ve always had coffee, loved coffee, but never had to make it on that scale of a machine before. And it was a little overwhelming at first, but,” Evans said as she looked at her friend Elana Miles, who sat across the table from her, “we persevered.”

Evans said that she hadn’t initially planned on putting a coffee shop inside of the bookstore.

Miles, who calls herself an “honorary employee” of the bookstore because she spent so much time helping Evans set it up, said that the bookstore has truly been a community effort.

“It’s a good thing. This community needs it,” Miles said. “There’s nothing else like it around here. The students coming in at Rowan-Cabarrus now have a place to come — here. We already have students, when we opened, they come in, sit, use the WiFi, get a coffee, meet, de-stress or study … they like it because they don’t have to drive to Starbucks or somewhere else. They can stay local.”

Evans said that the bookstore, which is located at 217 S. Main St. in Kannapolis, is just the first of many businesses that will be opening up downtown in the next few years.

“Downtown Kannapolis is going to be going through a big change — a good change,” Evans said. “So I just thought this would be a perfect location to have a front seat, to see all of that activity going on down there.”

She and Miles said they’re optimistic that the city’s purchase of a number of iconic downtown buildings will further the community-building efforts that they and their fellow citizens have been doing.

Miles, who used to live in Salisbury and moved to Kannapolis approximately six years ago, said that Evans’ bookstore is providing one of the first tastes of the Kannapolis community that she remembers from when she used to visit as a teenager.

“We have a mother who does her morning walk. She walks here, brings her little girl, we all know her. She comes in, she gets her coffee, visits with everybody and it’s a community. It’s like it used to be years ago. You know, where you had that local barbershop, the local coffee shop, the local diner. Everybody came to visit, everybody started knowing each other. And that’s how it’s getting here,” Miles said.

And while Miles emphasized how good the bookstore was for the community, Evans pointed out that it’s good for her as well.

As a stay-at-home mom for nearly her entire time in Kannapolis, Evans said that she wasn’t sure what to do when her other career plan — biotechnology — didn’t pan out.

“The jobs just weren’t there when I was graduating at that time. And my son was getting older and he didn’t need mom home near as much anymore. So I was kind of trying to figure out where ‘mom’ fit in the whole scheme of everything,” Evans said.

That’s when she thought about previous retail experience that she had when living in Ohio and thought about another used bookstore — The Book Trader — that had recently closed.

“It’s something that felt comfortable for me. And, to be honest, this isn’t work. I come and play bookshop and coffee shop,” Evans said. “And I get to see new people all of the time and help them find their favorite book and, I mean, who doesn’t want coffee?”

After collecting books from her personal library, The Book Trader’s inventory and community donations, Evans estimates that the store has more than 20,000 books in stock. The bookstore also has free WiFi, lots of seating and spaces for community events.

Evans said that, since the store opened on July 5, she’s already hosted art classes, essential oil classes and a jewelry pop-up store. She said that there would also be two local authors coming to the store next month.

The store is having its official ribbon cutting ceremony Monday, Aug. 28, at 9:30 a.m.

The store’s normal hours are 7 a.m. to 8 p.m. Monday through Saturday.