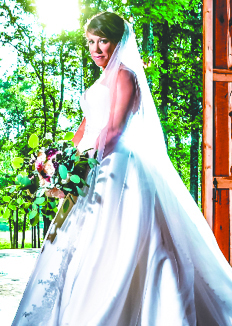 Kari Moffatt and Joshua Coffman were united in marriage on Saturday, August 26, 2017, at The Barn at Cedar Hill in Salisbury. Reverend Jerome Cloninger officiated the 5:30 p.m. ceremony.

Following the ceremony, there was a reception held at The Barn at Cedar Hill in Salisbury.

The brother of the bride, Mr. Jason Moffatt of Richmond, Maine, escorted the bride. The bride’s best friend, Mrs. Marissa Porter of Liberty, S.C., served as the Matron of Honor. Bridesmaids were friends of the bride, Mrs. Amy Tracy of Concord, Mrs. Lauren Bouknight of Salisbury, Mrs. Mary Catherine Ewart of Ellenboro, and the bride’s college roommate, Mrs. Leah Propst of Hickory. Serving as Junior Bridesmaid was the niece of the bride and groom, Miss Eleanor “Ellie” Coffman of Mt. Jackson, Va.

Serving as Flower Girl was the niece of the bride, Miss Kendall Moffatt, of Richmond, Maine. Serving as Ring Bearer was the nephew of the bride and groom, Master Henry Coffman, of Mt. Jackson, Va.

Guest registrar was goddaughter of the groom, Miss Audrey Johnston of Quicksburg, Va. Musicians were a flutist, Mrs. Linda Dumizo and harpist, Ms. Christine Van Arsdale, both of Charlotte, and soloists Ms. Mia Rice of Concord and Mrs. Amy Miller of Salisbury. Scripture recitations were read by a college friend of the bride, Mrs. Lori Rice of Valdese.

Kari is the daughter of Mrs. Susan Moffatt of Landis and the granddaughter of the late Mr. Spencer Hoyte and Kathleen Moose of Landis. A 2000 graduate of South Rowan High School, she received a Bachelor of Science in Nursing in 2004 from Lenoir Rhyne University in Hickory. She is currently employed as a Registered Nurse at Carolinas Healthcare System NorthEast in Concord.

Joshua is the son of Mr. and Mrs. Keith Coffman and the grandson of Mrs. Nellie Coffman, the late Mr. Clifford Coffman, and the late Mr. and Mrs. Joseph Kincaid, all of Mt. Jackson, Va. A 2000 graduate of Mt. Jackson High School in Mt. Jackson, Va., he received a Bachelor of Science in Parks and Recreation in 2004 from Appalachian State University in Boone. He is currently employed as Program Manager at Cabarrus County Active Living and Parks.

After the ceremony, the couple took a trip to the mountains of North Carolina and Tennessee and will reside in Kannapolis.