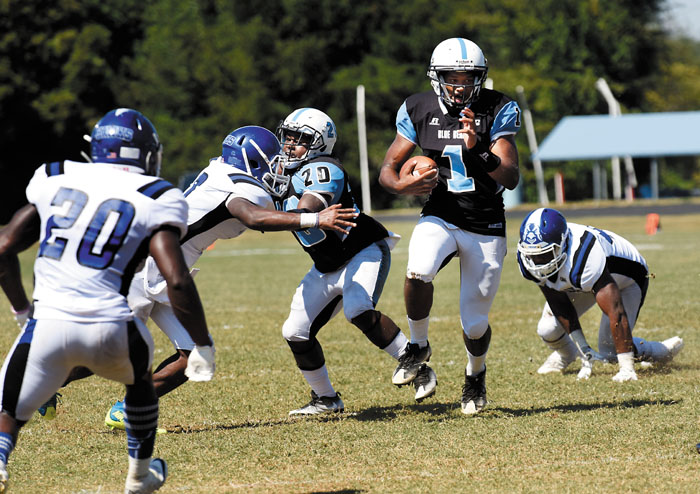 Wayne Hinshaw/for the Salisbury Post ... Livingstone QB Xaiver Longerbeam (1)scrambles for yardage in a game last season against Chowan. Longerbeam is the starter this Saturday when the Blue Bears open at Benedict.

SALISBURY — Livingstone is just a week away from the football season opener and head coach Darryl Williams says that the Blue Bears are getting more ready by the day.

A new NCAA rule did away with two-a-day practices, but at the same time, allowed schools to come in earlier. In other words, no “two-a-days” but more chances for “one-a-days.”

For the third straight year, Livingstone will begin the season in Columbia, S.C., facing Benedict in the Palmetto-Capital City Classic on Saturday. Game time is 5 p.m., at Charlie Johnson Stadium.

“Things are going well,” said Williams on Friday. “The extra week of camp is a good thing … having three, almost four weeks before the first game is great, as opposed to last year’s short turn around time.

“We’re very excited about what we’ve got going on so far,” continued Williams, who begins his fifth season at Livingstone. “There’s been no major injuries to this point, and that’s so important.”

The roster has 77 players listed, 30 which have had considerable experience and playing time for the Blue Bears. Williams also has a host of newcomers who played one or two years in junior colleges from across the nation.

After going 5-4 in 2015 with a senior-laden team, Livingstone slipped back to 2-8 last season with inexperience at a lot of positions — including quarterback.

Williams believes that having a returning starting QB puts the team way ahead of last year.

“Longerbeam will start in the opener,” said Williams. “He’s matured and grown as a player and I like what I see. He understands the offense better and he looks ready to take it to the next level.”

The 6-2, 215-pound Longerbeam completed 59 percent of his passes (93-of-158) in 2016, averaging 140 yards per game. He passed for nine touchdowns and just six interceptions. He also showed some mobility, running for 300 yards. However, Longerbeam’s net rushing yards were just 62, after sacks were figured in.

Senior running back Jarius Richardson returns for his third year as a starter. Last season, Richardson led the Blue Bears in rushing by far — 749 yards and eight TDs.

The offensive line is in flux but there is some experience returning in seniors William Odomes and Malik Washington and sophomores Ricky Felix and Orin Ogletree. Williams also mentioned newcomers Mo Samagbeyi, James Peay, Jarnaski Lassiter, Pecory Mathis, Eric Almeida and Nafis Davis. “I like our mixture there,” said Williams.

On defense, All-CIAA performer Armond Cox moves from defensive end to an interior position. Cox will be starting for the third straight year and was the team’s second-leading tackler last season with 60 stops, including four sacks.

Defensive back Gregory Hines, who led the Blue Bears with five interceptions a year ago, also returns.

Linebacker Jarod Richardson, Jarius’ twin, is back for his third year as a starter. “The Richardsons are playing very fast and both are bigger and stronger,” said Williams. “They bring a lot to the table. They’re team leaders as well, on and off the field.”

Livingstone will have a new kicker and punter. John Jones, who doubles as a defensive back, will handle the kicking duties. “We got two for one with him,” added Williams. “He kicked in junior college and did well, especially from the hashes.”

Darrell Favors, a freshman transfer from Georgia State, will do the punting. Thaddeus Bell, a reserve quarterback, may also punt some.

We’re excited and looking forward to this week and the first game,” concluded Williams. “We’ve got a bunch of older guys on defense that are ready to get after it.”