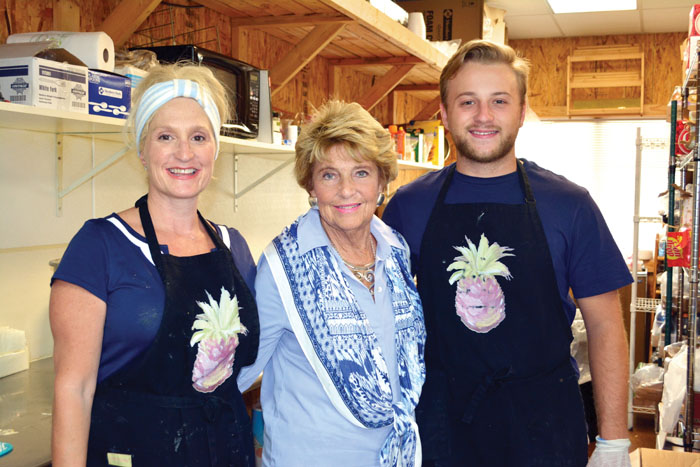 MOORESVILLE — A couple of years ago, Nancy Little Hucks saw no reason not to jump on the pimento cheese bandwagon.

It would seem so.

Still, Hucks, the daughter of the late Claude and Dora Blaine Little — longtime owners of The Little Kitchen in Mooresville — has been astounded by the success of Kathryn’s Cottage pimento cheese.

“We really dug deep to make sure we had something people really like,” Hucks said. “No one ingredient stands out. We’ve had a lot of success we were not expecting. We’re not trying to beat anybody else. Our products are from a cook who was a good Southern cook.”

That would be Hucks’ mom, Dora, for whom Hucks’ own grandson, Blaine Willard, is named.

“Anybody who could sit under her table was glad to do it,” Hucks said. “Our products are always fresh. They have the best ingredients for the right price.”

This summer, Blaine, a junior at Presbyterian College, is helping his mom, Ashley Willard,  make, deliver and sell the pimento cheese.

“We’ve found our niche with the farmers markets and our four customers,” Willard said. “Our business grew because of those markets and gave us wider exposure. Once you taste it, it’s over. We just have to find a way to get it to people.”

Everybody in the family has sold the pimento cheese. Hucks’ husband, Cliff, helps, as does a cousin, Robert Little, and Willard’s husband, Joseph.

“We have it down to a science,” Willard said. “That chicken was clucking on Wednesday.”

“It’s been a family effort,” she said. “This has been a great summer for us.”

Kathryn’s Cottage started because people kept asking Hucks for her mother’s blue cheese dressing that had been served at The Little Kitchen.

Willard, who has always worked in sales, became production manager about five years ago. She took over from Cliff Hucks, who had left his job to start the business in 2008.

Hucks and Willard agree that the pimento cheese’s spreadability makes it best. That’s because of the cream cheese they add to shredded cheddar and Monterey jack cheeses.

And pimento. Lots of pimento.

“We use extra pimento, which is an expensive ingredient,” Hucks said. “We never have cut back on quality. Ever. That’s what Mother and Daddy did.”

Kathryn’s Cottage sells about half regular and half jalapeno pimento cheese — an unusual ratio, but Willard says that’s because the jalapeno is not overpowering. It has just a little heat.

“If you heat it and melt it, it’s fantastic on tortilla chips,” Hucks added.

Both come in 12-ounce containers. And both the pimento cheese and dressings, Hucks said, work as spreads or as dips for crackers or veggies, and they are excellent on baked potatoes.

Willard makes about 500 containers of pimento cheese each week, in batches of eight.

“The pimento cheese has changed the whole dynamic of our company,” she said.