Clyde, Time Was: Rediscover the lost art of penmanship 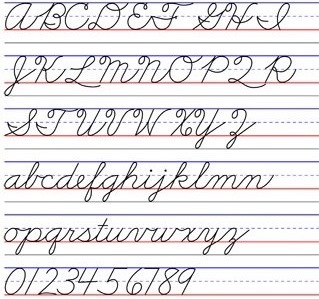 An example of the Zaner-Bloser style of writing.

Time was, we wrote in cursive. Handwriting was learned by repeated ovals and if we were lucky enough to be at the museum’s recent History Camp, a real staff pen and ink.

Our colonial fathers trimmed goose quill pens. As a matter of fact, the word for feather in Latin is “penna.” Duh.  And ye old lap desk with compartments for writing tools is not unlike its namesake, the laptop. Who knew that fluid, floating, flirtatious penmanship would evolve into the database of today? Why do we still use those old Roman letters instead of some cryptic symbols? At least we have thousands of fonts to choose from with no rhyme or reason. Just pick one.

Spencerian script was invented in 1848 by Roger Spencer. Infinite, intricate penmanship was copied by every promising school girl. It taught control, neatness, preciseness and beauty to add to her hand-painted dowry chest. It also kept the hands busy.

When did we get lazy and begin to scribble like doctors in what looks like chicken scratching?  Blank paper may be to blame, the old tabla rasa. Create your own style, like in music or pen-and-ink art. Writing tablets (get it) had a blue horse on the cover and blue lines inside to guide you. Remember that chalk contraption in first grade used to line the blackboard? Who got to dust the erasers first?

Civil War diaries were written on the back page of a Bible or any scrap of paper they could find. James Allen Brown, in charge of the telegraphs in Salisbury, was issued his last paycheck in Confederate money. Theo Buerbaum took a picture of it for a postcard. Save your paper, boys. The South shall rise again.

The 1915 Zaner method gave explicit directions for  success in writing technique. Letters were to be slanted at a 55-degree inclination and you should “sit straight, keep the feet flat on the floor. The wrist should not touch the paper. The pen holder should point near the shoulder. The first finger only should be on top of the holder. Keep the holder near the finger knuckle and not near the thumb knuckle. Hold the paper with the left hand. See that your arm rests comfortably.”

You might know, Zaner is in Ohio. Once again, Yankees telling us how to do something.

Once you learn to write, what do you say? Once you write it down, it’s history. Who knows? Those silly love letters may turn out to be the same ones tied with a pink ribbon in an old trunk that your grandchildren discover in your Historic District attic some day, right alongside your dead cellphone.

If you don’t know exactly how to express your innermost feelings onto the empty page of scented paper, there were books to give you samples to copy verbatim.

The 1836 “Providence Pocket Letter Writer” leaves nothing to the imagination in a lady’s answer, rejecting a suitor.

“Sir, In reply to the letter you have done me the honor of writing, I must beg permission to decline your addresses in the most decided manner; at the same time I return you the grateful thanks for having  highly distinguished me, and assure you, I shall forever bear a proper remembrance of it.

“Trusting you will suffer your natural good sense to conquer a passion which can never meet a due return from me, I remain your obliged and obedient servant.”

Erasers were a modern invention. Sand was used to get rid of ink blots. They say all emails and texts are kept for posterity — and lawsuits — in some hidden vault somewhere in cyberspace, next door to the card services telemarketing office. If that’s true, let’s have one great, big “delete day” for all those frivolous remarks.

Easier still, don’t write it if you don’t mean it. Don’t share it if it is useless trash. And don’t repeat it if it wasn’t worth the paper it was printed on to start with.

Your signature is your own personal mark. Letters give us a picture of the writer. Early invitations were dictated properly and proofread. Thank you notes and “bread and butter” notes were required. Funeral notices were  hand-printed and hand-delivered, stating when the family would be at home for guests to call. Volumes have been written (ha!) on how to write the proper card. None of these are available at Critters.

Good writing is useful in making things like yard sale signs and posters, most of which are basically stupid, Consider your audience. Who stops and stands to read endless minuscule script? And who puts up those illegal signs along the right-of-way that say “We buy houses” or “We buy junk cars”? Who would call them, and who takes the signs down?

Guess it’s a sign of times we are in.

Clyde, who has dropped his last name, is a Salisbury artist.