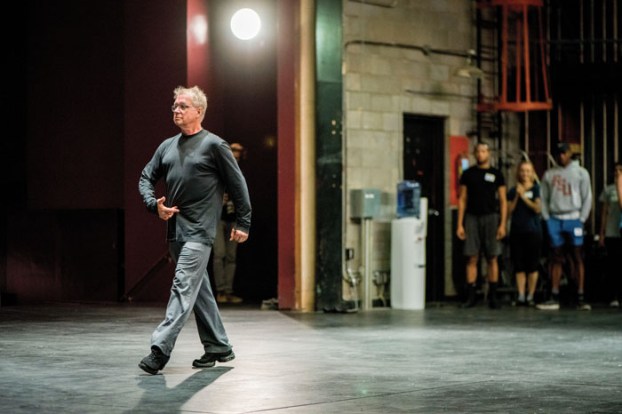 Vincent Paterson, a director and choreographer behind some of Madonna and Michael Jackson’s signature dance moves, was at Catawba College on Friday. Paterson led a master class for dance students in Keppel Auditorium. Jon C. Lakey/Salisbury Post

SALISBURY — Nearly 70 students gathered on the stage of Catawba College’s Keppel Auditorium on Friday, standing in rows under a bright stream of stage lights.

Those at the front of the class found themselves reflected in a long row of mirrors. While choreographer Vincent Paterson talked about getting into the mind of a character, many of the students practiced facial expressions in the glass.

Paterson is a renowned director and choreographer who has worked with stars such as Madonna, Michael Jackson, Van Halen, David Lee Roth, George Harrison, Donna Summer, Sheena Easton and Paul McCartney. He has also choreographed for films including “Evita” and for stage productions and operas including “Manon.”

Paterson was invited to Catawba to teach a dance symposium by adjunct professor of dance Tod Kubo, himself an accomplished director and choreographer. On Friday morning, Paterson hosted a three-hour “master class” for 70 students from local colleges, universities and high schools.

Kubo said he posed the idea of a dance symposium to Paterson, whom he knows through work in Europe, in January. The project blossomed from there.

“It’s a big credit to the college to host something so massive,” Kubo said of Catawba.

But for Kubo, this is just the beginning.

“All of us at Catawba see this as a starting point to many things we’d like to bring here,” he said.

The school has top-rate facilities, Kubo said, and could host symposiums and workshops to benefit the college and the community.

During the master class, Paterson walked students through the lyrics and choreography of “Peron’s Latest Flame” from the musical “Evita,” drilling them in steps, expression and how to step into the skin of a mid-1900s Argentinian.

Over the next three hours, Paterson put the students to work, telling them to dig deep. In order to capture the outrage at Argentinian aristocracy, he asked the performers to think of a moment when someone in their life made them feel unvalued or less than what they are.

“You have to realize that what you’re singing — and what you’re fighting for — is to prove them wrong. … You have to find that within yourself and make these characters real,” he said.

For Paterson, choreography and acting are more than learning the moves or saying the lines. They are about finding your place in history. Even background dancers should know their character’s background. On Friday, Paterson lectured about the history of Argentina, corrected students’ posture and instructed them how to walk as if they were members of the upper class.

A performer’s job is to move the audience, he said. No matter what part they are playing — whether they are acting, singing or dancing — performers should connect a character’s feelings to something similar in their own lives.

It’s this part of Paterson’s teaching that Kubo thought students would benefit from the most.

“He comes from the mind of an actor and director,” Kubo said.

Which means that, as a choreographer, Paterson understands the layers one needs to be a good performer.

Paterson encouraged students to think about the words they were singing — to take the generalities of verse and make them something solid and real.

It would be “deep homework” to do these things, he said, and hard work. But it would always pay off.

“I swear to God,” he said, “you do that kind of work and you’re going to get the job, every time.”

Students were also encouraged to be open, have fun and take risks when playing a role. Life is too short to do anything else, Paterson said.

“The truth of it is that we can walk out that door and die,” he said. “This moment, we’re alive. … So commit. You’re here because you love what you do, obviously. So go for it.”

As the day progressed, the group grew steadier in step, moving as a single unit, refining the passion and emotion the performers put into every movement. They sang louder, with more assurance and conviction, until the music echoed around the auditorium.

Kubo said the symposium was made possible by a long list of community sponsors.

“Salisbury community people, please keep supporting the arts,” he said. “…This wouldn’t happen without community support and our sponsors.”

SALISBURY — A Woodleaf man was found guilty of voluntary manslaughter Friday after a weeklong trial in the death of... read more