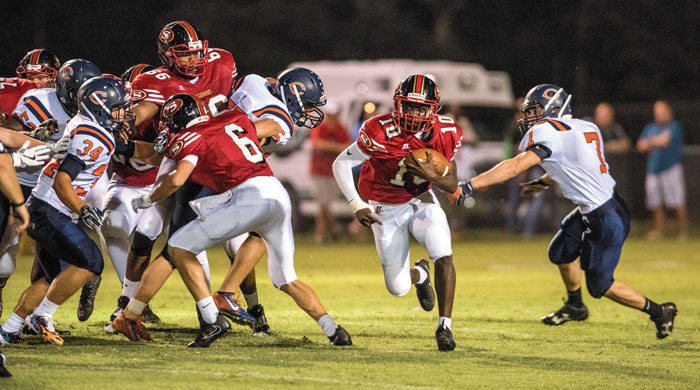 JON C. LAKEY / SALISBURY POST Salisbury’s Raheim Walker (10) turns the corner on a 65-yard touchdown run on the first play of the second half, last night at Ludwig Stadium. The Hornets went on to defeat Carson, 41-12, presenting new coach Brian Hinson with his first victory.

SALISBURY — Salisbury’s Raheim Walker came blasting up the middle on the first snap of the second half, a  Carson linebacker got blocked, the safety had rolled down, and it was a footrace to the house.

An almost untouched Walker won that dash toward the Carson end zone for a 65-yard touchdown, and that play told the story of Friday night. Salisbury won every race and demolished the visiting Cougars, 41-12 at historic Ludwig Stadium.

Griffin Myers threw three touchdown passes for the Hornets, Trell Baker had 104 receiving yards and a key fumble recovery, and young linebacker Jabril Norman had three sacks and batted down a pass. It all added up to Brian Hinson’s first victory as Salisbury’s head coach. There was no Gatorade dousing for Hinson, but he did get a water bath from happy Hornets.

“A lot of things that happened tonight for us were the reverse of what happened to us last week (a 42-15 loss to North Rowan),” Hinson said. “Last week, we turned it over. Tonight, Carson’s turnovers really helped us out. Last week, North got quick scores at the end of the half and the start of the second half. Tonight, that was us.”

Many of the stats were close, but not passing yardage where Salisbury earned a big advantage with huge plays, and the turnover column where the Hornets held a 3-1 edge. And Salisbury’s lone turnover — a weird one on a fumble through the Carson end zone — came when Hornet reserves were mopping up.

The third snap of the game was a Carson fumble. Baker, who flies around on both sides of the ball for the Hornets, made the recovery at the Carson 35.

“That set us loose,” Baker said.

Linebacker Josh McCurry made a couple of hard-nosed plays, and it looked like the Cougars might get a stop, but on fourth-and-6 at the Carson 31, Myers made a nice read and a great wide pitch to freshman Mike McLean. McLean sped around the left corner for six, and Jack Fisher’s PAT made it 7-0 with 8:40 left in the first quarter.

Baker had a touchdown catch called back late in the first quarter, but when  Carson put the ball on the ground again early in the second quarter, the Hornets cashed in. Again, Carson almost got the stop, but on fourth-and-12 from the Carson 19, Myers found Joe Steinman down the left sideline for 16 yards to the 3. Walker scored on the next play, and it was 14-0 Hornets.

“We were moving the ball OK, but then we’d stop ourselves,” Pinyan said. “We dug a hole with the turnovers, and then we had to start doing stupid stuff to try to get back in the game.”

Trailing 14-0 but still in it, Carson punted to the Hornets late in the half. Salisbury took over at midfield with 1:10 remaining. Baker immediately beat the Cougars deep for a 35-yard connection with Myers. Then Myers hit another speedster Tyrone Johnson, the county sprint champ, down the left sideline for the score that made it 21-0 at the break.

“When you’ve got athletes like Baker and Johnson, it’s just a pretty sight to see what they can do,” Hinson said. “But when you’re playing against guys who have that special burst like they have, you’re always holding your breath.”

Carson went into halftime reeling, and then Walker’s long TD run on the first play from scrimmage in the third quarter, ended any remaining suspense. Carson can move the ball in 9-yard chunks with its triple-option offense, but it’s not an offense that can make up a 27-point deficit in a half.

“Carson’s quarterback (Cole Sifford) is a very scary guy,” Hinson said. “But our defensive coordinator Mike Herndon did a great job this week. Our kids were well-prepared to play against the option.”
Sifford got Carson on the board in third quarter, capping a 65-yard drive with a 5-yard flip to basketball star Jamarius Hairston. Hairston got thumped making the reception, but he hung on. He appeared to be hurt initially, but he was back in the game on Carson’s next possession.

Carson made it 34-6 when Myers found Adam Drye wide open in the end zone from 5 yards out.

Baker scooted out of the grasp of several Cougars on a 31-yard scoring pass from Myers early in the fourth quarter for a 41-6 cushion.

“Griffin threw good balls all night,” Baker said. “It was one of those games where the offense and the defense were doing their jobs.”

Carson got the final points when Sifford bolted 8 yards to score with 7:06 remaining.

A lot of Salisbury defenders — Norman, linebacker Blaine Shellhorn, defensive linemen Tevin Mullenax and Levaric Johniken and safety Luke Holland — had their names called out as tacklers all night long.

Gerry Cipres rushed for 81 yards for the Cougars, but Salisbury was able to take away Sifford and Hunter Courtney, who had a big game in the opener against South Rowan, at least while it still mattered.

“The difference between this week and last week is we played for 48 (minutes) tonight, instead of  half,”  Norman said. “Their option wasn’t that hard to read. We’d practiced for it, and our defense executed.”

Norman said he felt a “special spark” on Friday, and Hinson agreed.

“He’s got a chance to be one of the special ones,” Hinson said.