West Rowan rebounds with solid effort against the Cavs 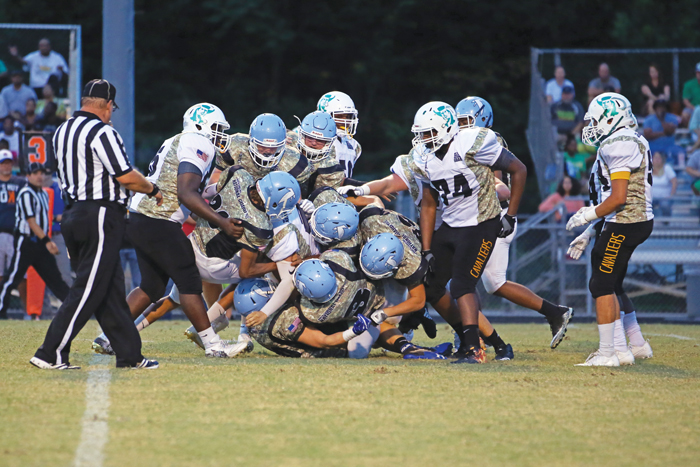 MOUNT ULLA — When you parachute into West Rowan’s world, expect a fight — even when it matches brother-in-law against brother-in-law.

The scrap-for-everything Falcons are always a tough out at home — and Friday night’s rumble against visiting North Rowan was no exception.

“You know why?” defensive tackle Devin Turner said after West gained a 27-11 non-conference victory. “Our whole team played with a chip on our shoulder. Last week at Mooresville (in a 29-3 season-opening loss) we let the coaching staff down. So this week we didn’t focus on the whole brother-in-law thing like everybody else. We just focused on winning the game.”

It paid off for West (1-1). The Falcons played hermetically sealed defense, limiting North (1-1) to 36 yards rushing and a fourth-quarter touchdown.

“We got outplayed,” said Cavs’ coach Ben Hampton, a relative-by-marriage to West coach Joe Nixon. “We made mistakes and they didn’t. We had too many mess-ups in the offensive backfield. You can’t fumble the ball around, mishandle snaps and expect to be successful.”

West, meanwhile, rebounded from last week’s punch in the mouth in a big way. Playing behind an inspired offensive line, junior quarterback Payne Stolsworth passed for 217 yards and three touchdowns. The Falcons scored 27 unanswered points in the second and third quarters to crack the game open.

“Mentally, we got everything straight,” said junior left tackle Logan Younce. “We had to be physical with them if we wanted to keep pushing the rock down the field.”

West pushed it into the end zone for the first time this season early in the second quarter, when Martavio Rankin roto-rootered his way through a hole on a 4-yard touchdown run. Two North punts and a turnover later, the Falcons struck again when Stolsworth fired a 27-yard TD pass over the middle to NR transfer Jaden Perry. It gave them a 13-3 halftime lead.

“They were in a cover-3 with one high safety,” Stolsworth said after completing eight of 15 attempts. “We ran verticals — and with that he had to pick one side or the other. I just looked him off and threw the other way.”

West all-but-secured the victory by landing an uppercut in the third quarter. On the third play of the second half, the well-protected Stolsworth connected with sophomore Ty’kese Warren on a 59-yard touchdown play down the left sideline.

“It was trips right and again, we just ran verticals,” he said. “I saw that we had an advantage over the cornerback and just gave it a shot.”

Stolsworth’s last completion capped West’s next possession. This time he fired a bullet over the middle to super-soph Jalen Houston (4 receptions/113 yards), who caught the ball in stride and raced 74 yards down the left side for a highlight-reel TD.

“I remember the linebacker looking at me and watching Houston run right past him,” Stolsworth explained. “As soon as I saw that, I hit him and let him run away from everyone.”

North closed the scoring with a too-late-to-matter touchdown just 28 seconds into the final period. It came when quarterback Willis Mitchell lofted a 24-yard scoring pass to sophomore Malcolm Wilson.

The Cavs’ were fresh off a one-sided, Week 1 victory over Salisbury and expected to put up a better fight. Despite 62 yards from do-it-all running back Jaleel Webster, they never established a ground game.

“The key was surrounding him before he hit the line of scrimmage,” Turner said. “We had to slow-plan it and get to him before he got to us.”

The game was trumpeted as a Hampton-Nixon family affair, but both coaches downplayed that angle.

“This game was made into a brother-in-law rivalry,” Hampton said. “It’s not a rivalry. We’re coaches. We came and coached the game. Now we’re gonna go home.”

Added Nixon: “It has no bearing on the game. It’s about the kids on the field. Whoever is on that other sideline, we’re going to try to beat. It doesn’t matter who it is.”

NOTES: It’s never a good sign when your punter is your best performer, but North’s Jacob Young stood out. He averaged 47.6 yards per kick on five punts — including a 70-yarder in the third quarter — and gave the Cavs a 3-0 lead with a 41-yard field goal in the opening period. … Defensive backs Malcolm Ingram and Reggie Everhart intercepted passes for West. … Both teams wore camouflage uniforms in honor of Military Appreciation Night. … Nine members of Rowan County’s Little League softball team, which finished runner-up at the recent World Series, were recognized at halftime. … The Falcons are idle next week while North hosts Lexington.