East Rowan has no trouble with Central Davidson, cruises to 49-0 win 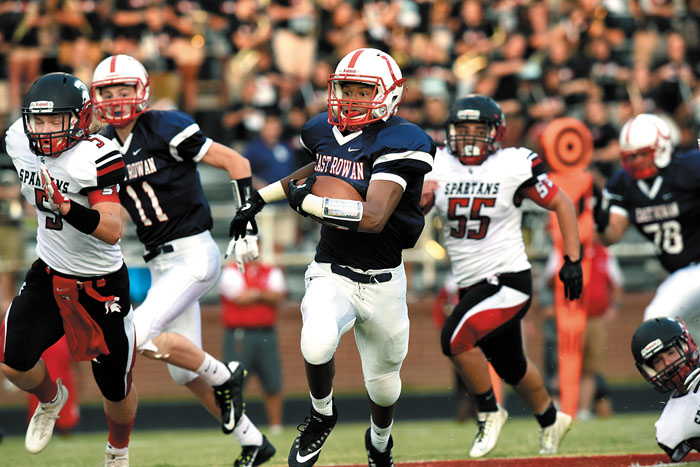 Wayne Hinshaw/for the Salisbury Post ... East Rowan’s Sam Wall, on his way to one of his two touchdowns for the Mustangs.

GRANITE QUARRY – Whatever was ailing the East Rowan Mustangs in their season opening loss a week ago was definitely cured last night in their home opener.

“I was a little disappointed in our effort last week (39-25 loss at North Stanly),” Fitz said. “But the kids came out tonight and they were just ready to play. We pretty much shut them down tonight for all practical purposes and that is all you can ask them to do.”

Running their new triple option offense, the Mustangs got two long TD runs (67 and 44 yards) from junior slot man Sam Wall plus a pair of keeper runs by quarterback Justin Smith in the first half. Smith then went to the air in the third quarter with a pair of touchdown passes on identical plays to Deiontae Gallmon (86 yards) and Nate Hamilton (39 yards) to put the game completely out of reach. Hamilton’s score made it 42-0 with 5:10 left in the third period resulting in a running clock the rest of the way.

Strong safety Noah Green capped the scoring in the fourth period when linebacker Christian Bennett blocked a Spartan punt in the end zone. Green snagged the ball around the 5-yard line and pushed his way into the end zone to make it 49-0 with seven minutes left to play.

“Man, that was my first ever touchdown ever,” said Green with a wide grin. “I just grabbed it and put my head down and drove it in.”

The Mustang defense was even more impressive as they held the Spartans (0-2) to 102 total yards, stopped them on downs a remarkable five times, and did not allow them to cross midfield until the final two plays of the first half. Central quarterbacks Justin Fortner and Alex Trexler were sacked three times with Bennett, Devon Cherry and Trevor Scruggs doing the damage. Cherry also had a fumble recovery in the second half. Coach Fitz also cited the play of Green and 6-7 defensive end Elton Hooper who is playing football for the first time this season.

The loss continued a long string of frustration for Central Davidson, of the Central Carolina Conference, which has now dropped 26 games in a row dating back to October 2014. The one bright spot for the Spartans was Trexler from the running back spot who carried the ball 23 times for 75 yards.

East Rowan took control of the game right out of the gate as Wall took a hand-off five plays into the game, executed a stutter step and broke 67 yards for the score. He did the same thing on the first series of the second quarter, taking a pitch 44 yards down the right sideline to make it 21-0.

“If it wasn’t for my offensive line, I promise you I would not have been able to do what I did,” Wall stated. “It was just a pitch and dive on both plays. But I feel like we all clicked better tonight than last week because we really wanted it.”

Smith, a 6-3 junior quarterback, admitted he was still learning the intricacies of the team’s nee triple option attack but it did not stop him from making the right reads in the first half to produce keeper runs for scores of 35 and 15 yards in the first half.

“It is a lot different from what we ran last season,” Smith noted. But it is coming together. The offensive line blocked great tonight and I thought we did a good job of executing the option.”

At the beginning of the second half, East was up 28-0 when the defense stopped the Spartans on downs on consecutive possessions. On both occasions, the Mustang offense used an almost identical option pass play to produce two back-breaking touchdowns.

Smith rolled right from his own 14 and shoveled a pass out to the speedster Gallmon. It was the only time Gallmon touched the ball on offense in the game but it was good for an 86-yard sprint and a 35-0 lead. On the very next possession, Smith executed the exact same play from the Spartan 39 but this time it was to the junior running back Hamilton.

“I tried to fake the defense out on both of those plays,” Smith said, “and it worked out. I think I did a good job of reading the linebacker both times.”

Smith ended up with a well-rounded effort with 62 rushing yards and two TDs while passing for 154 yards on just three completions and two TD tosses. Wall led the ground attack with 115 yards on just 5 carries and his two scores.

The big play aspect of the East offense is by design, Fitz noted. “If you run the option the right way, that is what is going to happen,” he said. “If someone on defense doesn’t do their job, then someone on offense is going to break loose.”

The Mustangs continue non-conference play next Friday when they travel to take on county rival South Rowan.

West Rowan rebounds with solid effort against the Cavs