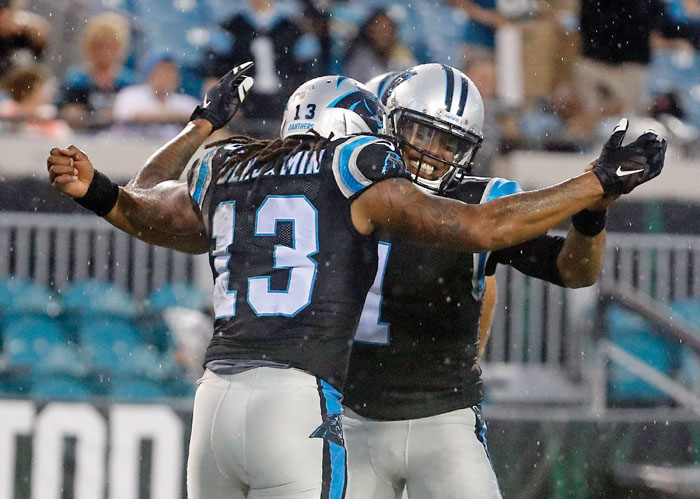 Carolina Panthers quarterback Cam Newton (1) celebrates after throwing a pass for a touchdown to wide receiver Kelvin Benjamin (13) during the first half of an NFL preseason football game against the Jacksonville Jaguars, Thursday, Aug. 24, 2017, in Jacksonville, Fla. (AP Photo/Stephen B. Morton)

Seeing live action for the first time since last season’s finale, Newton completed both of his passes for 21 yards and a touchdown in Carolina’s 24-23 victory over the Jacksonville Jaguars on Thursday night.

Newton’s 9-yard slant pass to Kelvin Benjamin capped a 10-play opening drive that showed Panthers coach Ron Rivera all he needed to see from his star quarterback. Newton spent the rest of the night watching from the sideline.

The 2015 league MVP had surgery in March to repair a partially torn rotator cuff in his right, throwing shoulder. Newton participated in the first five practices of training camp before developing soreness and backing off for nearly two weeks.

He amped up his workload this week in preparation for the team’s third exhibition, quite possibly the only action he’ll get in the preseason. The Panthers (2-1) wrap up exhibition play next week against Pittsburgh.

The Jaguars (1-2), meanwhile, may continue their quarterback competition into the preseason finale at Atlanta.

Chad Henne got the start over Blake Bortles and had an up-and-down night that would have been much better if not for a drop. Henne completed 8 of 14 passes for 73 yards. He lofted two perfect deep balls to rookie Keelan Cole and Allen Robinson, although Cole dropped a would-be touchdown for the second time in as many games.

Henne also was sacked three times and had a pass batted down at the line of scrimmage. He led the Jaguars on two scoring drives in five possessions, the first one aided by a 51-yard run on a fake punt.

Bortles was 12-of-16 passing for 125 yards, highlighted by a 4-yard touchdown pass to Shane Wynn in the fourth quarter. Bortles also threw an interception that was returned 48 yards and set up a touchdown in the third. The ill-advised pass was a little behind Allen Hurns and into double coverage.

Two-time All-Pro center Ryan Kalil also made his preseason debut after sitting out two games with a shoulder injury. And rookie receiver Curtis Samuel, a second-round draft pick from Ohio State, saw extensive action after missing time because of a hamstring injury. Samuel finished with four receptions for 15 yards. He was targeted a team-high six times.

Jaguars kicker Jason Myers drilled a 44-yard field goal and both extra points, saving his job at least for now. Myers missed three field-goal attempts and an extra point in Jacksonville’s first two preseason games, prompting the Jaguars to bring in veteran Dan Carpenter and Patrick Murray for workouts last weekend. The team opted not to sign either one, instead putting Myers on notice about his shaky job security.

Panthers: Guard Dan France left the game to be evaluated for a concussion.

Jaguars: Cornerback Doran Grant also was evaluated for a concussion and cleared to return.