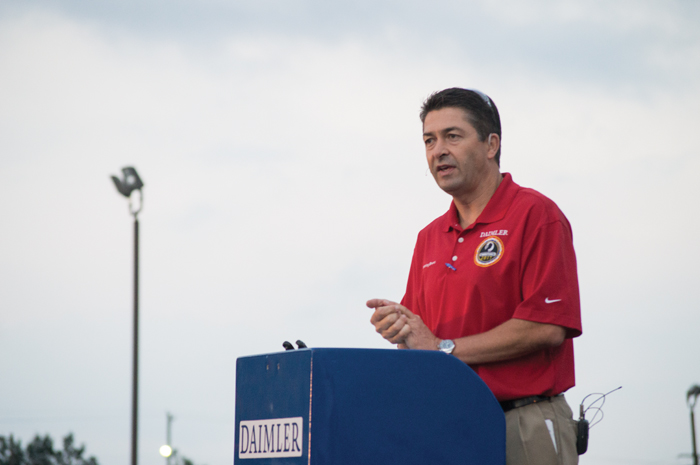 Josh Bergeron/Salisbury Post Henning Bruns, plant manager of Daimler Trucks North America's plant in Cleveland, speaks during a Friday town hall event in which he announced the plant would recall 50 employees. The plant also held a groundbreaking ceremony for its new logistics center.

CLEVELAND — Daimler North America’s Cleveland plant manager said Friday that construction will begin soon on a new logistics center and that 50 laid-off workers will be rehired.

Henning Bruns said the company will be reaching out soon to those who will get their jobs back.

Bruns said the rehired employees will come from every department.

Construction is beginning nearly two years after tax incentives for the center were approved. Bruns said the new center will give Freightliner more warehouse space and a better workflow.

The project represents a more than $19 million investment by Daimler North America, which makes Freightliner trucks.

“Another thing on the warehouse is we’re going to apply a warehouse management system which will allow us to know at any given point in time where what parts are,” he said.

Bruns said a number of employees have been working on and designing a new truck model called the P-4.

“There’s many things new to these trucks. On the one side, they have a much greater fuel efficiency, compared to our previous trucks and even to the competition in the market,” Bruns said.

He said the P-4 trucks also will have features that will increase the “up time,” or availability, of trucks for consumers.

The P-4 model is set to be unveiled in mid-September, and the trucks will be commercially available in the beginning of 2018.

Speaking to a group of red-shirted employees, Bruns also talked about day-to-day plant concerns, such as workforce morale and a new employee fitness center.

The rehiring of 50 employees comes in the wake of two rounds of substantial layoffs in early 2016. A total of 1,486 employees were let go in the first two months of that year.

Bruns said “it is too early to say” whether other employees will be hired back in the future. But he said that for now, the market looks like it’s moving in a positive direction.

“We definitely want to transform this plant here,” Bruns said. “I mean, this is a very proud place. We have invested a lot of money into Cleveland.”

Rod Crider, president and CEO of RowanWORKS, said the plant’s expansion and rehiring of workers give him hope.

“I think that … they are looking to build more stability into their workforce, avoiding the ups and downs of having to call people back and lay people off as the economy changes,” Crider said. “I think that bodes well for the future — for the plant, for Rowan County, and for people in surrounding counties.”