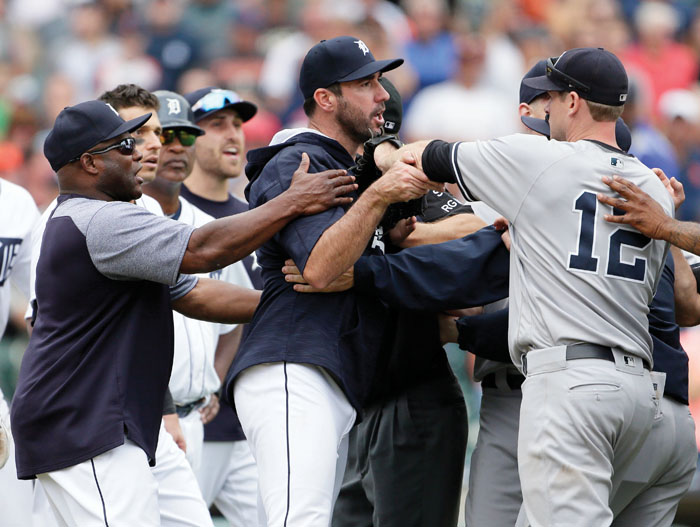 AP Photo/Duane Burleson ... Detroit Tigers hitting coach Lloyd McClendon, left, tries to pull Justin Verlander, center, away from New York Yankees’ Chase Headley during the second bench-clearing of the baseball game, in the seventh inning Thursday, in Detroit. The Tigers defeated the Yankees, 10-6, but six players and both managers were ejected.

All the testiness that had been building between the Detroit Tigers and New York finally boiled over. The toll of Thursday’s fury — three bench-clearing altercations, eight ejections, one beaning and a lot of angry words.

“I’m sure there are going to be suspensions on both sides,” Yankees manager Joe Girardi said after a 10-6 loss.

The winning and losing pitchers — Detroit’s Alex Wilson (2-4) and New York’s Dellin Betances (3-5) — were among those tossed. So were Girardi and Tigers manager Brad Ausmus.

At one point, the ill will carried over to the Detroit dugout, where star pitcher Justin Verlander and teammate Victor Martinez appeared to get into some sort of dispute.

“I was actually on the field, so I haven’t seen it and haven’t talked to them about it,” Ausmus said. “I’m aware of it, but I couldn’t tell you what it was about.”

Perhaps the only positive thing: This was the final time the Yankees and Tigers were scheduled to play this season.

James McCann and Justin Upton homered for Detroit, and Gary Sanchez went deep for the Yankees, but that all became secondary on a day when the umpires had their hands full trying to maintain order. Major League Baseball now figures to be busy, too, sorting out likely penalties that could especially hurt the playoff-contending Yankees.

Girardi contended an early warning would’ve cut off the trouble before it escalated. He blamed the umps for letting things go wild, saying, “Just a very poor job on their part.”

Much later, Betances was ejected after he hit McCann in the helmet. Betances seemed to be indicating he had thrown a breaking ball instead of a fastball, and wound up shouting at the Tigers and the umps.

“I threw him out and that was to keep control of the game,” umpire crew chief Dana DeMuth said. “And the reason why it took a minute or so, was because I wanted to get the players apart. Once I got Detroit going to their dugout and New York going to their dugout, then I informed him that he was ran.”

“It wasn’t necessarily of him intentionally beaning the batter, but to keep control of the situation, I deemed it necessary that he went,” he said.

Although Cabrera vs. Romine was the peak of the hostilities, McCann’s beaning was the most frightening.

The problems between these teams began well before Tommy Kahnle threw behind Cabrera in the sixth inning. Last month, they had a game at Yankee Stadium in which four batters were hit.

This time, Michael Fulmer hit Sanchez with a pitch in the fifth, an inning after Sanchez had homered for the fourth time in this three-game series.

“If you can’t see that Fulmer clearly hit Sanchez on purpose, there’s something wrong,” Girardi said.

Fulmer looked like he might be hurt after throwing that pitch, and he was checked by the trainer before staying in the game. He said he had no intention of hitting Sanchez.

Kahnle was ejected after his pitch behind Cabrera, and Girardi was tossed after he came out to argue.

“When they throw at me, it was OK. … I was cool with that,” Cabrera said. “When they started arguing with the umpire, I said to Romine, ‘Calm down.’”

The game was finally about to resume when Cabrera stepped toward Romine, and the New York catcher took off his mask. Cabrera gave him a two-handed push to the chest.

“He said, ‘You have a problem with me?’ And I said, ‘This isn’t about you,’” said Romine, whose brother Andrew plays for the Tigers. “And then he pushed me. It felt like he wanted a confrontation there and I just tried to defend myself the best I could.”

Cabrera and Romine were ejected, and Romine was so incensed by his dismissal that he threw his mask when he entered the dugout.

An inning later, Betances hit McCann in the helmet with a pitch, causing benches to empty again.

, and Betances and bench coach Rob Thompson were tossed. Betances said he didn’t hit McCann on purpose, and McCann seemed to agree afterward.

“I don’t think it was intentional,” McCann said. “At that point in the game, Miggy was thrown at, Sanchez had been hit, and at least in my mind, the retaliation was over. I don’t think that he was trying to hit me on purpose.”

Wilson and Ausmus were ejected in the eighth after Wilson hit Todd Frazier around the thigh with a pitch. The benches cleared for a third time.

“With me hitting a guy in the leg, it’s what I have to do and that’s what I did,” Wilson said. “Fortunately for me I know where my pitches are going, and I hit a guy in the leg today to take care of my teammates and protect them.”

Jose Iglesias gave the Tigers a 9-6 lead when he hit a three-run double in the seventh off David Robertson, who had relieved Betances. Iglesias had three hits for the Tigers, and Brett Gardner had four for the Yankees.

Shane Greene got five outs for his fourth save.

“We did a nice job of fighting back, excuse the expression,” Ausmus said. “It was a good win and we needed the win.”

Tigers: After hitting Sanchez and being checked by the trainer, Fulmer pitched into the seventh inning. … McCann also stayed in the game after being hit in the head, and he homered the following inning.

Tigers: Verlander (9-8) takes the mound in Chicago against RHP Miguel Gonzalez (7-10) of the White Sox.