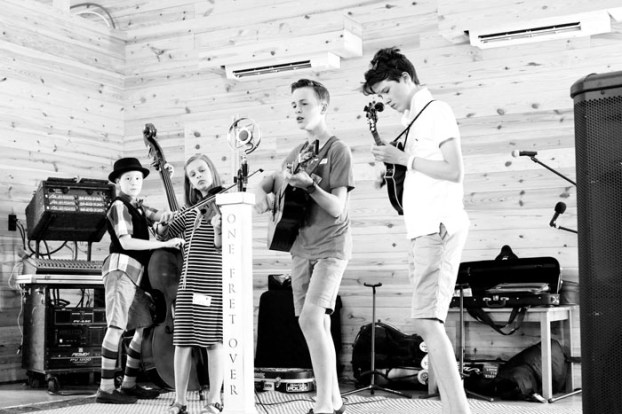 A-Pickin’ and a-singin’: local youth to perform at “A ‘Bury Home Companion”

SALISBURY — Like many, Ronnie and Amy Bemus learned to love bluegrass music through the 2002 movie “O Brother, Where Art Thou?” The pair were drawn to the music’s multigenerational, time-tested charm.

As parents, they found a new aspect of the genre to adore: its communality.

“One of the things that we really like about bluegrass is the accessibility that comes with it,” said Amy.  “It’s a very social style of music. … It allows our kids to have community with other musicians that have similar interests. … They’ve made some wonderful friendships through that.”

The friendships and mentorships would help their children, Gabe, 14, and Grace, 11, achieve many things. Five years ago, the siblings entered a bluegrass competition in Union Grove with Gabe on guitar and Grace on the fiddle.

Gabe placed first. Grace, in a last-minute decision, sang along with playing “Amazing Grace” on fiddle. Her performance brought the emcee to joyful tears.

From then on, Grace couldn’t get enough.

“She was hooked at that point,” said Amy. “I think she had just finished kindergarten, yet she realized that this music has an impact on people.”

The siblings went on to perform at local fundraisers and community gatherings as the Bemus Kids, as well as continue to participate in competitions across North Carolina and neighboring states.

“What we like about competitions is they really give (Gabe and Grace) the opportunity to focus on developing pieces of music,” Amy said. “It helps them get ready for the pressure of a competition and learn to rise to the occasion.”

Their pursuit of music education and training would put them in contact with another set of musically inclined, bluegrass-playing siblings. Last year, at a camp in Morganton, they met 13-year-old Elijah Moore and 10-year-old Lincoln Moore, who play the mandolin and upright bass, respectively.

Their parents would quickly realize that they had similar goals for the young musicians, and the band One Fret Over was formed.

“(Bluegrass) is something that carries through generations. The younger people playing the music are the ones that are going to carry it into the next generation,” Amy said. “Our focus is really to share the music with other people.”

One Fret Over will make its Salisbury debut Saturday at the Salisbury Symphony’s production of “A ‘Bury Home Companion.” The show is at 8 p.m. at the Meroney Theater.

Ma-Maw’s Basement: Betty Culp welcomes you to a picker’s paradise

EAST SPENCER — Visit Betty Culp and you meet a vibrant 94-year-old woman who has loved life, is proud of... read more