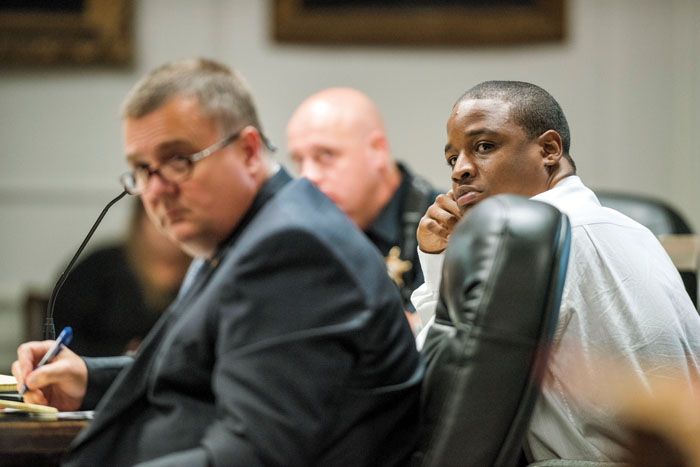 Defense attorney Darrin Jordan, left, and his client, Destin Sloan, glance over at the evidence being presented on an projector screen. The trial for Destin Sloan continues in the Rowan County Superior court on Wednesday. Jon C. Lakey/Salisbury Post

SALISBURY — Kerry Gray was “aggressive” and didn’t appear to be scared of a gun pointed at him on July 13, 2014, during an argument with the neighbor now on trial for shooting  him to death, according to testimony in the case Wednesday.

Destin Sloan is on trial on a charge of second-degree murder.

Gray, 39, and Sloan fought before the shooting, which occurred in the driveway of Sloan’s home at 145 Maria Lane in Woodleaf, not far from Gray’s home at 185 Deb St.

Sloan left the scene and took his baby, who was in his house at the time of shooting, to the mother’s home, authorities said and court testimony confirmed.

Michael Wyrick, a high school friend of Sloan, had intended to hang out with Sloan that day. He arrived just as Gray and Sloan began to argue. Wyrick was inside his car when he saw the argument and part of the shooting.

Wyrick told the court he felt as if the verbal fight would escalate and he felt that Gray was being aggressive.

Wyrick testified that he heard Sloan tell Gray to leave, but he didn’t. He said Sloan then walked toward Gray.

Wyrick said he didn’t see the actual shooting because a truck was partially blocking his view. Wyrick said he could tell Gray grabbed for the gun and the two men tussled over it before Gray was fatally shot.

According to Wyrick, Gray fell on top of Sloan.

Caitlin Vessells, the former girlfriend of Gray’s nephew Sha’Heem Gray, told the court she knew Sloan before moving to the mobile home park in 2014. She met him when she was 18 and they both worked at Bojangles’.

Vessells said she was home at the time of the incident and went to her front door when she heard a lot of yelling. She couldn’t understand the words but knew the two men were arguing, and she sawi them both in the yard, she testified.

Gray put his hands up to show he had no weapons, and Sloan fired a warning shot toward the ground, Vessells said.

She saw Sloan wave the gun around and Gray move toward Sloan to take the gun. Vessells said Gray told his neighbor, “If you’re going to shoot me, then do it.”

She testified that Gray was shot and fell onto the ground. She ran toward Gray to check on him, but her legs began to buckle and she couldn’t move any closer, she said.

“When Kerry said, ‘Fight me like a man,’ he could’ve put that gun down,” Vessells said of Sloan. “They could’ve gone into their houses.”

Jurors heard testimony from Dr. Lauren Scott, an associate chief medical examiner who conducted an autopsy on Gray’s body the day after the shooting. One by one, Scott went through 12 pictures that she or an assistant had taken of marks, abrasions, and bullet entry and exit wounds on Gray’s body.

The pictures included a close-up of Gray’s face as well as the entry and exit of gunshots to Gray’s genitalia, which she said were not fatal. Other pictures showed entry and exit points on the left side of his chest. The bullet to the chest exited Gray’s lower back. The same bullet fractured a rib, injured a lung, went through the heart and tore through one of three major arteries.

A bullet went into the right side of Gray’s neck and was found lodged in his body. Scott said that bullet tore through Gray’s carotid artery, which supplies the head and neck with oxygenated blood. The same bullet tore part of Gray’s spinal cord, the doctor said.

The injuries to the chest and neck would have been fatal, and Gray would likely have survived only a few minutes with those injuries, Scott said.

Sloan’s attorney, Darrin Jordan, asked Scott if she could tell if there was any medical intervention performed after Gray was shot. She said none that she could tell.

Jordan asked about whether the injuries could determine the trajectory of a bullet or where the victim was standing in relation to his client.

Scott said the injuries did not indicate the direction of the body.

Mesimer marked and collected bullet shell casings, a Beretta pistol with blood on it taken from Sloan’s car, a metal and wooden baseball bat, and Sloan’s clothing that included a blood stained T-shirt, sweatpants and tennis shoes.

Sloan did not ask for or receive medical attention at the scene, Mesimer testified. Mesimer also video-recorded the scene, which included a re-enactment by Sloan.

The trial will resume at 9:30 a.m. today and is planned to end by Friday.