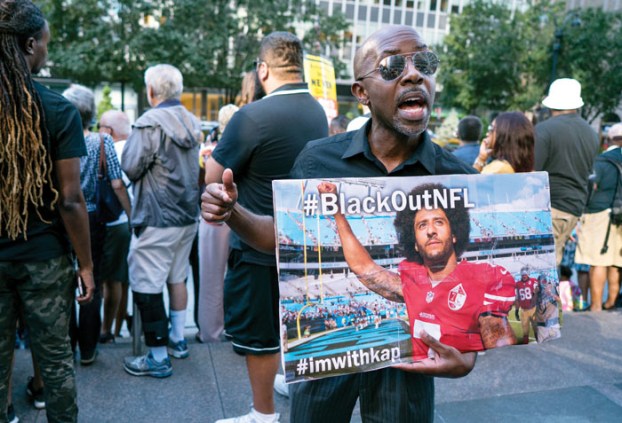 NEW YORK (AP) — Supporters of former San Francisco 49ers quarterback Colin Kaepernick, who refused to stand for the national anthem to protest police brutality against blacks, showed their solidarity with him and his cause at a rally outside National Football League headquarters on Wednesday, demanding that he be signed by the start of the regular season next month.

Kaepernick, who once took the 49ers to the Super Bowl, opted out of his contract with the team in March and remains unsigned. Supporters say he is being blackballed for his advocacy, but some critics say he should not have sat or kneeled during the anthem or contend his lack of a job is more about his on-field talent.

Women’s March organizer Tamika Mallory, addressing football fans, said, “I don’t care how long you’ve been watching football, if they don’t stand up for your children, turn the damn TV off.”

Some speakers said the league’s treatment of Kaepernick is of a piece with a cavalier attitude toward players’ health.

Earlier Wednesday, the NAACP called for a meeting with the NFL to discuss the fate of Kaepernick, who was born to a white woman and a black man but was adopted by a white couple. The civil rights organization’s interim president, Derrick Johnson, said in a letter to the NFL’s commissioner, Roger Goodell, that it’s apparently “no sheer coincidence” that Kaepernick isn’t on a roster.

“No player should be victimized and discriminated against because of his exercise of free speech — to do so is in violation of his rights under the Constitution and the NFL’s own regulations,” Johnson said.

The NAACP’s state president in New York, Hazel Dukes, said: “Right now, the action of the league seems to imply to young black men that this league, which is comprised of 70 percent African-Americans, only values black lives if they are wearing a football uniform.”

Some other players followed Kaepernick’s actions last season, and some are doing so in this year’s pre-season. On Monday, a group of Cleveland Browns players prayed in silent protest during the national anthem.

Among those kneeling was a white player, Seth DeValve. Another white player, Britton Colquitt, did not kneel but kept his hand on the shoulder of a teammate who did.

That protest earned the ire of an Ohio Supreme Court justice, the lone Democrat holding an Ohio statewide office. Justice Bill O’Neill wrote on Facebook that he wouldn’t attend any games at which “draft dodging millionaire athletes disrespect the veterans who earned them the right to be on that field.”

From golf to football: Zain Tucker is making his mark in both sports

By Mike London mike.london@salisburypost.com CHINA GROVE — Coach Joe Pinyan has no idea how many football games Carson will win this season,... read more