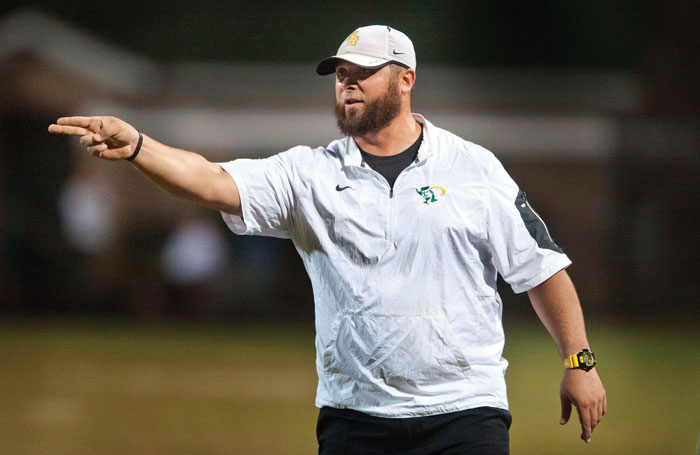 JON C. LAKEY / SALISBURY POST wayne Hinshaw file/for the Salisbury Post Brothers-in-law, West Rowan’s Joe Nixon, and North Rowan’s Ben Hampton, pictured, see their respective teams go against each other tonight in Mount Ulla. The Cavaliers and Falcons have not met since 2012, a 29-21 win by West, when Nixon was the head coach at North. Tonight’s game is the home opener for West.

West has been county champion often during the last two decades, including last year, but North has a change to change that tonight.

There are a lot questions floating in the air after Week 1.

Is West as bad as it looked against Mooresville?

Is North as good as it looked in the second half against Salisbury?

This is a game where the opposing head coaches are brothers-in-law, so another question is on which side of the bleachers will the Hamptons, Rick and Gay, sit?  Their older son, Ben, is North’s head coach. Their other son, Patrick, is North’s offensive line coach. On the other hand, their daughter, Hillary, is married to Joe Nixon, West’s head coach.

So it’s not a routine call. Maybe Gay on one side and Rick on the other.  North and West haven’t played each other in five years, so this situation is uncharted waters for everyone.

Ben said the family got together, same as always, on Sunday. They didn’t dwell on tonight’s football game, but they didn’t avoid talking about it, either.

“Joe and I joked about it a little bit, we can rib each other,” Ben said. “The thing is we’re both fortunate enough to coach good football teams and we both have multiple players who can take the ball to the house any time they touch it.”

Ben was a star running back at West. It’s been 17 years since that stirring stretch in the autumn of 2000 when he helped West beat A.L. Brown and Concord back-to-back on the way to the first conference championship in school history. That season changed a lot of things at West. A lot of banners hang in Mount Ulla now.

Ben wanted to be a coach, and he had a decision to make after he graduated from Coastal Carolina. He elected to come back to his home county.

Nixon, a standout offensive lineman at Catawba, had settled in Rowan, too. He’d married Catawba graduate Hillary Hampton, the former West Rowan basketball and softball star, on the same December Saturday in 2008 on which West had seized the first of its three consecutive 3A state championships.

“I came back and joined Mark Woody’s staff at Carson,” Ben said. “When I was coaching at Carson, Joe was on (Scott Young’s) staff at West and Patrick was playing tight end for West, so those West-Carson games became a pretty big deal for our family.”

Nixon got his first chance to be a head coach at North Rowan in 2012. Ben made the move to North, as well, joining his brother-in-law as offensive coordinator. They helped lift North’s struggling program to 8-4, 13-1 and 10-3, in three seasons together.

The next fork in the road came in 2014, with Nixon returning to West as head coach. Ben became his successor as North’s head football coach.

“I knew the day might come when Joe and I were coaching against each other,” Ben said. “But North wasn’t on West’s schedule then.”

Realignment brought new scheduling opportunities for everyone. West now has just five league games, instead of nine, and West vs. North makes a lot of sense for everybody. Both schools should benefit at the gate. Fans benefit from seeing one of the county’s best rivalries restored. A North-West game last season would’ve been the game of the year in the county, but it didn’t happen. Zion DeBose and Kortez Weeks never shared the same field, and that was a shame.

But now West and North are playing. Can West block Darren Williams or tackle Jaleel Webster? We won’t have to speculate. We’ll get to see what happens.

“This is different than it was when I was at Carson because now Joe and I are both head coaches,” Ben said. “Hopefully, we’ll get a good crowd out there. Whatever happens, it’s a positive for Rowan County football to have North and West back on the field together.”

It makes for a stressful week for the family, but once the game is over, win, lose or draw, things will get back to normal quickly. The Hamptons and Nixons will share the same dinner table again when Sunday rolls around. And for the rest of the season, they can cheer for each other without any divided loyalties.

“Coaches coach the games and then they go home to their families,” Ben said. “The only difference for Joe and me is that our families happen to be the same one.”

The picks were 5-1 last week, better than expected for an opening night. The picks should’ve been 4-2. Davie was in charge against Page for 43 minutes, but let the game get away in the last five.

North leads the series, 28-22-2, although Young-coached West teams  took the last eight meetings. The last North win came in the Roger Secreast days in 2001. After West demolished the Cavaliers, 60-0, on opening night in 2008, the teams didn’t play again until 2012.

West has two backs, Jaden Perry and Jayden Jones, who were a big part of North’s success last year. That’s an unusual dynamic that adds to emotions.

As ugly as the opener was for West, the Falcons have a tendency to bounce back, especially when they’re being counted out.

It’s hard not to talk about coach Joe Pinyan when you talk about the Salisbury-Carson series.

When Pinyan was coaching Salisbury, the Hornets went 5-1 against Carson from 2007-12. Since Pinyan took the helm at Carson in 2013, the Cougars are 4-0 against Salisbury.

The one time Pinyan was on the losing side in this county rivalry was in 2010 when Carson, led by Shaun Warren, the No. 2 all-time rusher in Rowan County, prevailed. That was one of the better wins in school history by Carson and former head coach Mark Woody, as Salisbury won the 2AA state championship that season.

As far as tonight, Salisbury is the more talented team and has a lot of big-play possibilities with sprinters Trell Baker and Tyrone Johnson. If those guys get the ball in space, Carson can’t catch them.

A win would be a big one for new Salisbury coach Brian Hinson, who has coached against Pinyan before. Hinson coached East Rowan from 2007-09, and East had lost 20 straight county games when Hinson coached the Mustangs to a stunning upset of Pinyan’s Salisbury team on opening night in 2007. Hinson’s East teams lost the next two years to Pinyan and the Hornets.

Salisbury is expected to have a winning season, while Carson is not. But Pinyan is one of the great coaches in county history (123-61). He’s won two out of three for 15 years, and he’s fooled the people who make predictions before.

The last time Central Davidson won a football game was at South Rowan on Halloween night, 2014.  Since then, the Spartans have dropped 24 in a row. That lengthy losing skid actually started during former East Rowan coach Chad Tedder’s tenure. Clayton Trivett, a former Catawba offensive lineman who spent some time as an assistant at Salisbury, took the reins prior to the 2016 season.

This is a great opportunity for the Mustangs, who usually play well at home, to give new head coach John Fitz his first win. East showed a lot of offensive potential in Week 1.

If the Mustangs tackle better tonight and clean up the turnovers, they could win big.

Last meeting was in the second round of the 3AA state playoffs in 2008. The Wonders won that one 21-13 on their way to a state-title game appearance. The Wonders have won all three previous meetings with Marvin Ridge, a school that has blossomed into an athletic power in a host of sports since opening in Waxhaw (Union County) in 2007.

Marvin Ridge is coming off an 8-6 season that peaked with three straight playoff games against Cabarrus teams. Marvin Ridge put up 146 points in those three games, outscoring Concord and Robinson, before losing to Hickory Ridge in overtime, 55-49.

The Wonders had a cakewalk opener, throwing up more than 500 yards of offense, mostly on the ground, despite numerous holding penalties. Defensively, A.L. Brown held Hopewell under 100 yards.

It will be considerably more challenging tonight for the Wonders. They’ll have to stop running back Cale Deveaux, who had more than 1,200 rushing yards in 2016 and had 120 on opening night.

This will be the 50th meeting. North Davidson leads the all-time series, 26-23.

Davie ended a four-game losing to streak to North Davidson last year. The last four seasons, the winner of this game has scored at least 40 points, but with both star QBs graduated, this one will be more ground-oriented and more defensive-minded.

North Davidson is a 2A team this season, but still has 4A personnel and 4A depth. The Black Knights are coached by former Catawba receiver Brian Flynn, who played for the Indians during the head-coaching tenures of David Bennett and Chip Hester. North Davidson returns 15 starters from an 8-5 team.