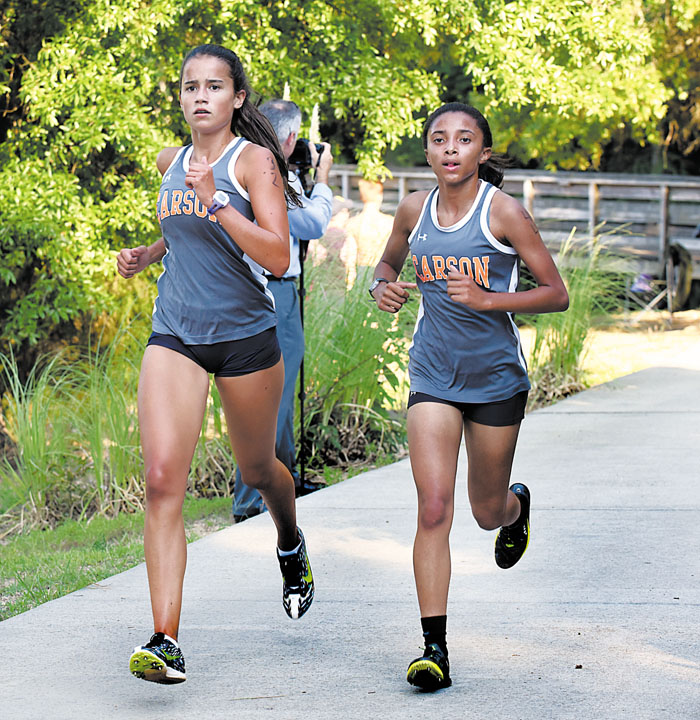 Wayne Hinshaw/for the Salisbury Post ... Carson’s Taylor Conrad, left, and Taylor Wiggins, right, were side-by-side for most of Thursday’s race, before Wiggins fell near the end. Wiggins got up and still finished second in the meet.

SALISBURY — A perfect storm of events converged as Salisbury edged Carson by a single point for the Rowan girls county cross country championship last October, but it appears the Cougars are ready to retake control.

Carson won the county in 2014 and 2015 before being knocked off by the Hornets last year.

“I’m happy,” Carson coach Les-Lee Efird said. “If we can just keep the girls healthy, we can have a strong season.”

They’re both back in Carson orange. On Thursday, Conrad won by a landslide in 20:58. Wiggins finished second in 21:23, but she did it with championship sprit, getting up from a nasty fall and gritting her way to the finish line despite a twisted knee.

“There was a curve in the path coming out of the woods and the ground was uneven and I fell,” Wiggins said. “I was right behind Taylor (Conrad) when I fell.”

The two Taylors ran side-by-side or neck-and-neck virtually every step of the way until Wiggins went down. It would’ve been an exciting finish.

“We were helping to pace each other and to push each other,” Conrad said. “I hate that it happened. I hate Taylor fell because I didn’t want to win like that. I’m just glad she’s going to be OK.”

Carson has a meet Saturday, but Wiggins will be taking the ACT, so she wouldn’t have been able to compete, anyway.

Wiggins, a senior, was the county’s runner of the year in 2016, but Conrad may have won yesterday even without the accident. Conrad, a sophomore, has been working diligently.

“When I first started running cross country, it was just to stay in shape for my other sports (basketball and soccer),” Conrad said. “But now I really enjoy working at it, and it might end up being my best sport. I like that cross country is a sport I can practice on my own. It’s harder to practice soccer and basketball by yourself.”

“Having Olivia back really helps, and adding Lani helps,” Efird said. “For a freshman to be our fifth scorer today, that’s huge.”

The surprising Raiders were led by Madison Lowery (3rd), soccer phenom Madison Henry (7th) and Anahi Reta (8th). The Raiders also have an all-county returner in Madison McGuire (12th) and could make some noise before the season is over.

Grace Faller and Shalea Vanhoose were 13th and 14th and were the top East runners.