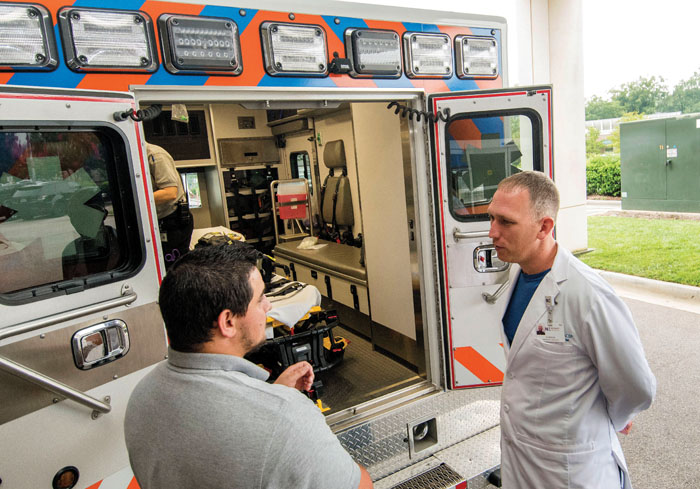 Second in a two-part series

SALISBURY — When Dr. John Bream finished his residency in 2012, he had never seen a single heroin overdose.

That changed as opioid addiction swept across the state and patients with overdoses started flowing into hospital emergency rooms.

Bream, director of the Emergency Department at Novant Health Rowan Medical Center, said his staff started seeing an uptick in 2016.

“It really has exploded since then,” he said.

Drug overdoses have become the leading cause of death for people under age 50, which is more than gun-related homicides and collisions combined.

Statewide, 347 patients were seen in hospital emergency rooms for heroin-related overdoses just in the month of July. That was up from 232 in July 2016.

And a lot of those overdoses occurred in this part of the state.

“The problem is not solely confined to the I-85 corridor, but it is definitely the biggest area,” said Bream.

Five counties along Interstate 85 — Mecklenburg, Guilford, Rowan, Cabarrus and Davidson — have some of the worst problems for opioid and heroin overdoses in North Carolina, according to health officials.

It’s estimated that 142 Americans will die every day from a drug overdose, says the Centers for Disease Control and Prevention.

According to the CDC, the majority of overdose deaths involve an opioid, including prescription opioids — such as hydrocodone — or heroin.

Heroin is a semi-synthetic substance made from morphine, which comes from the dried milk or gum of the opium poppy plant.

Within the past few years, heroin has become the go-to drug in Rowan County. It’s simply more accessible and cheaper than other drugs. And for many users, heroin is an alternative to prescription painkillers.

As access to prescription opioids has tightened, people have increasingly turned to street opioids like heroin or fentanyl or a combination of the two, according to law enforcement authorities.

In 2015, 27.1 million people in America reported they were using illegal drugs or abusing prescription drugs, according to the National Survey on Drug Use and Health.

Fentanyl is a powerful synthetic opioid pain medication that was developed in 1959 by a Belgian chemist. The drug was later marketed to provide opioid pain management, in some cases for patients battling cancer or to treat patients with chronic pain who got no relief from other painkillers.

Fentanyl is administered through a transdermal patch, flavored lollipop, effervescent tablet and nasal spray. Although similar to morphine, fentanyl is 50 to 100 times more potent, according to the National Institute on Drug Abuse.

In its prescription form, fentanyl is known by such names as Actiq, Duragesic and Sublimaze. The street names for fentanyl or for fentanyl-laced heroin include gray death, Apache, China girl, China white, jackpot, Murder 8, TNT, and tango and cash.

In July, a Lincolnton Road man was charged with drug possession, and among the various drugs investigators seized was gray death heroin. Demario Morrow faces a number of charges in that incident, including trafficking in heroin near a school. He was issued a bond over $500,000 and a few weeks later posted it and was released. His case is pending.

The bulk of the heroin available today is China white or gray death, according to Rowan County Chief Deputy David Ramsey.

Ramsey, who spoke with a source who has been involved in both large-scale trafficking and is a heroin user, said it is believed that most of the heroin coming into Rowan County is not laced with fentanyl, but some distributors may be cutting it locally with fentanyl.

The bulk of the distribution here is controlled by African-American gangs, which was not typically seen several years ago, Ramsey said.

“We have seen lab reports from the State Crime Laboratory showing that some of the heroin seized in Rowan County had fentanyl in the substance submitted, but the majority did not,” Ramsey said.

According to Ramsey, the source had “never seen things as bad as they are at present” and knew multiple people who had died from overdosing.

A gram of heroin, which can typically be sold in rubber balloons or plastic bags, is between $130 to $140. At distribution levels, such as 7 grams, the price more than triples at $500. Some users abuse an average of one-tenth of a gram, Ramsey said.

Rowan County Sheriff Kevin Auten said the rise in heroin use has been dramatic.

With increased abuse of opioids comes a rise in overdoses.

As of Aug. 11, there had been 65 opioid overdoses in Salisbury since Jan. 1, with six verified opioid-related deaths, Police Chief Jerry Stokes told the City Council during a recent meeting.

Police Capt. Melonie Thompson said in those 65 overdose cases, Narcan was administered 24 times. Narcan is the prescription medicine used to temporarily counteract the effects of an opioid overdose.

Thompson said city police have submitted opioids to the state crime lab for testing with the belief that a number of those drugs contain fentanyl.

“We are seeing an alarming number of people that have overdosed in cars, in parking lots and, of course, most recently the subject who had his toddler child in the car with him,” Thompson said. “Many of the people in cars are called in by concerned citizens, and the call usually comes in as someone passed out at the wheel.”

On Aug. 11, a man and woman overdosed in downtown Salisbury and were found unconscious on the sidewalk by a passer-by. A 5-year-old boy was in their pickup parked nearby. Rowan EMS and police were called to the scene, where medics administered Narcan. David Whisenant-WBTV
A man and woman were found unconscious from a drug overdose in downtown Salisbury on Aug. 11. They were spotted on the sidewalk by a passer-by. A 5-year-old boy was in their pickup parked nearby. Police report 65 opioid overdoses in Salisbury this year as of Aug. 11, with six verified opioid-related deaths. And many expect the problem to continue to get worse.

Thompson said sometimes police find drug users with a needle in their arm or lying nearby.

In July alone, Rowan County emergency communications received 91 calls for overdoses with a small percentage of them reported as accidental. However, officials say not all of the calls were for heroin.

These calls occurred at apartment complexes, homes in rural parts of the county and city areas, near parks, at convenience stores and other public places throughout the county.

In three cases, authorities and emergency personnel went to a single address twice in July.

In June, there were 545 opioid overdose emergency department visits in North Carolina, compared to 356 in June 2016.

In these communities, the overdose patients were predominantly male at 61 percent and white at 84 percent, and 38 percent of patients were between ages 25 and 34.

Narrowing the cases down to heroin only, there were 384 heroin-related overdose emergency department visits in the state in June, compared to 172 in June 2016. Among those patients, 63 percent were male, 85 percent were white and 47 percent were ages 25 to 34.

Bream said Rowan’s emergency department recently saw an overdose patient who was Narcan-resistant. The opioid the person had taken was so strong that Narcan could not reverse its effects.

Bream said some drug users are abusing fentanyl and carfentanil, which is 100 times more potent than fentanyl.

“And that’s when this could get really scary,” Bream said.

One patient who was rushed to the emergency department recently had had four overdoses in a month. A passer-by found him on the side of the road and brought him to the hospital. The man had turned blue and was unconscious.

Bream didn’t have time for a stretcher — he ran with the unconscious man into the emergency room. The hospital staff gave him an IV with Narcan. The man regained consciousness, told hospital staff that he was fine and left.

Bream said he believes the opioid crisis is going to get worse before it gets better.