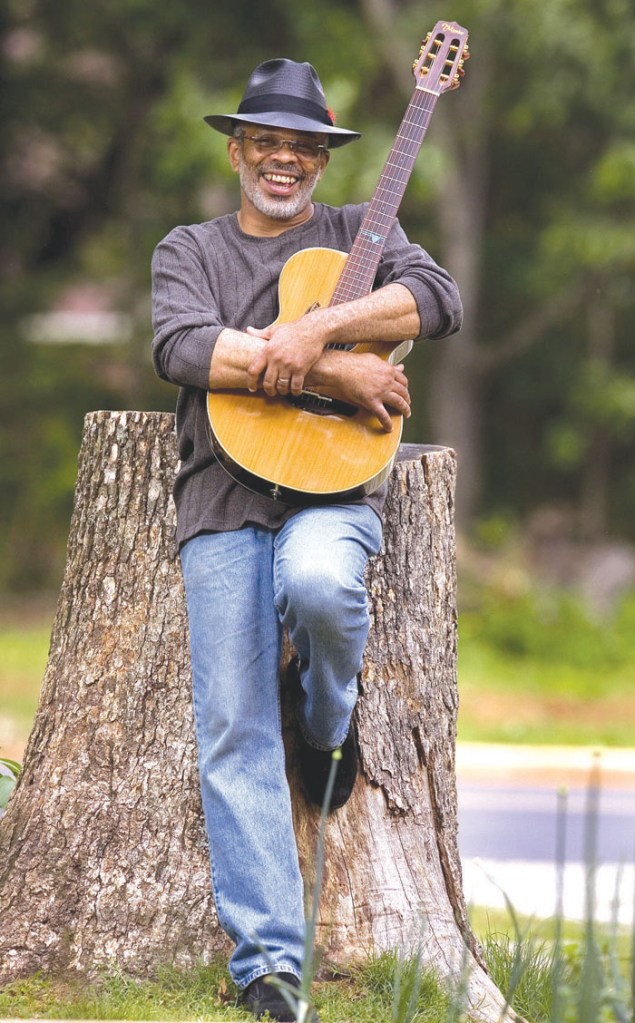 Storyteller and musician Lorenzo “Logie” Meachum has traveled the world sharing his love of stories and blues with audiences. On Tuesday, Aug. 29, he’ll perform a mix of storytelling and song in the Stanback Auditorium of Rowan Public Library, 201 W. Fisher St. This will be the kick-off performance of the 2017-18 Friends of Rowan Public Library and Cheerwine Concert Series. Doors open at 6:30 p.m.; the performance begins at 7 p.m. Admission is free, and all ages are welcome.

A native of Greensboro, Meachum credits a childhood steeped in music with influencing his life’s path. “I delighted in poetry and its creation, and I also liked to sing,” he said. He often sang with his father and the rest of his family, and he learned to love poetry from relatives, including his grandmother, who often recited it by heart.

He has many stories about his maternal grandparents, Mary Lilly, “Miss Mae Lilly,” and Norman Franklin Chavis. Meachum recalls his Miss Mae Lilly fondly: “Jesus sat at her table,” he says. “Her spirit was powerful enough to affect nature…a prayerful acceptance of her place in the scheme of all of nature and a fearless will to set right the sins of men.” Meachum observes, “Of all that I am, most of what I am, is a child of Chavis.” His performance on Tuesday will include stories about these childhood experiences.

In college, Meachum traveled with the North Carolina Central University Touring Ensemble, performing up and down the East coast and some Midwest cities. In the 1990s, he toured internationally with the company Poetry Alive! He credits that time with bringing him into educational theater. “That experience and the response I received from the educational community across America set the compass for me….This process brought me to God and education as a ministry.” Meachum would go on to earn a Master’s in Education from Virginia Polytechnic Institute and State University.

Since then, he directed the Winston-Salem State University Drama Guild for 15 years and taught in the African and African American Diaspora Studies Department at the University of North Carolina at Greensboro until 2013. His interactions with students and audiences have left a lasting impact. “Many of my favorite moments are really not my own, but those I have observed from the back of an auditorium when one or a group of my students were on stage,” Meachum says.

Though he’s traveled and performed across the United States and abroad, Meachum always returns to North Carolina. “I’m always hearing James Taylor when I’m away from home,” he says.

He’s invested a lot in his home state. He’s performed at venues across North Carolina, both as a solo artist and with others. He’s often performed with Bubba “Bump” Klinefelter, as a duo (Bump & Logie) and with their electric band, The After Hours Blues Band.

Meachum is also a founding member of the Piedmont Blues Preservation Society (PBPS), a non-profit organization. The PBPS mission is “to help the youth of our community discover the wonder of music by raising awareness and providing music education to our community and schools.” Based in Guilford County, the PBPS’s outreach includes the annual Carolina Blues Festival, concerts, competitions, workshops, and educational programs.

“Blues in the Schools” is one of the educational programs sponsored by PBPS, and Meachum recently traveled to the Middle College at Rockingham Community College in Wentworth, N.C., to perform. “We did a process that I like to call ‘Stargazing at Noon.’ We look for the talent in the school,” he said.

Meachum enjoys these engagements. “I have discovered that I come back to performance and music because my journey in life is the utilization of the tools of the spirit,” he says.

For Meachum, who was diagnosed in 2016 with prostate cancer, life lately “has been a study in present tense because of so many uncertainties.”

At the news of his diagnosis, his community rallied. Sheila Klinefelter, whom Meachum describes as “one of the area’s most dynamic bass players and a founder of the Lady’s Auxillary (Band),” started a Go Fund Me page. It raised $20,000, which helped Meachum complete a nontraditional therapy program in San Francisco, CA.

Today, he follows an alternative medicine regimen and focuses his energies thoughtfully. “My health and my children at this point are a major focus and source of joy,” he says. He has two sons, Ishmael Alexander Meachum, a student at Howard University, and Isa Austin Meachum, a junior in high school. “Their lives and the excitement around these coming college years provide for my family all kinds of activity, anxiety, and delight. Both of my sons are musicians and participated in the National Poetry Slam in San Francisco just this past July.”

Quoting Mark Twain, he says, “It’s not what we don’t know that’s going to destroy us; it’s all the stuff we know for sure that just ain’t so.” Though Meachum says, “I’m living in a time when all of what I used to know for sure, ‘just ain’t so,’” he remains resilient and energized.

Meachum continues his exploration of life, honing his skill with guitar and pursuing writing projects as his performing schedule allows. His first children’s book, “Great Googley Moogley,” which features artwork by his friend Floyd Newkirk, was published in 2016.

He also continues performing, working with PBPS, and seeking new opportunities: “I have no answers,” he says. “Everything is changed…It means anything is possible.”