West Rowan has some youth but still a conference favorite 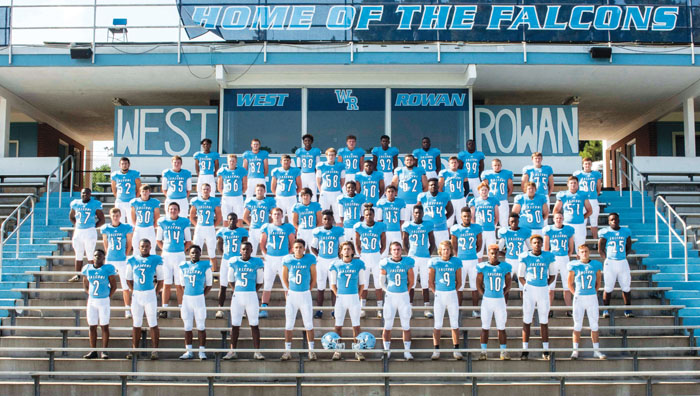 Falcons At A Glance

MT. ULLA – With the amazing success achieved in the past decade, the West Rowan Falcons are a team that reloads rather than rebuilds. There have been bumps in the road for sure but the Falcons have not had a losing season in 20 years, won three consecutive state 3A championships and put together a 44-game win streak against county opponents.

The upcoming 2017 season may not be a juggernaut, but they have a strong core of returning talent on offense and defense and some promising newcomers to fill the voids left by graduation.

“As far as experience, we are very young on both sides of the ball,” said West head coach Joe Nixon, who starts his third season after back to back records of 10-4 and 9-2 in the South Piedmont Conference. “With that being said, we have some young players who have done a good job for us so far. But you never know what is going to happen until you play on Friday nights.”

For the new season, the Falcons return to the newly revamped North Piedmont Conference, where they enjoyed many of their glory days. The six-team 3A league features East Rowan and Carson, plus South Iredell, Statesville and North Iredell. It also opened the doors for more non-conference games and West  loaded up with some talented and difficult competition, including Davie County, A.L. Brown and Concord in back-to-back-to back weeks.

“Obviously, it is a very tough schedule,” Nixon said,” but we wanted to finds teams that are good competition that will hopefully prepare us for our conference play. The new conference will be better for us and renew some old rivalries plus draw some big crowds.”

The Falcons, who opened their new season last Friday with a 29-3 loss at Mooresville, do have 25 lettermen returning  but Nixon is quick to point out that only two starters back on offense and four on defense are playing the same position as last year. “We’ve got a lot of guys in a lot of different places,” he said, “and we do have some depth a certain spots, but it is not necessarily experienced depth.”

Sometimes the course of a season can be determined by pushing the right buttons and taking a few chances. There is no better example than last season at the quarterback position for West.

The Falcons entered 2016 without an experienced quarterback so they inserted speedy, athletic Kortez Weeks in the position.  But after two weeks, the offense was sputtering, so Nixon took a chance on sophomore Payne Stolsworth under center and moved Weeks to his more natural wide receiver position.

The move paid big dividends as Stolsworth (6-3, 180) responded with 2,034 passing yards and 25 TD passes. Weeks, of course, went on to a record setting receiving season and is now a freshman at Division I Elon University.  Those two led West to the third round of the state 3A playoffs, before falling to Hibriten.

Stolsworth is back for his junior season and looks to simply get better.

“As the season went on, I was seeing the field better and seeing guys get open,” Stolsworth said. “I gained a lot of experience and just felt comfortable back there. He doesn’t have Weeks to throw to anymore but … “our receivers are all pretty fast this year, maybe not as tall, but as long as I put the ball where it is supposed to be, we will be okay.”

The Falcons’ running game is in solid hands with senior Martavio Rankin (5-9,205) leading the way. He posted 305 yards and five TDs in the Falcons’ pass-heavy offense last season.  “I will do my best in my last season to work within my team and be the best I can be,” the humble Rankin says. “Our running back group comes as one together, so every night whoever has the hot hand, that is who is going to get the ball.”

That running back group includes a couple of transfers from North Rowan, both with exceptional speed and pass catching ability. Senior Jayden Jones (6-0, 185) had 650 yards and five TDs for the Cavs last season while junior Jaden Perry (5-7, 160) had 320 yards and one score.

Sophomore Jalen Houston is a top newcomer at both running back and receiver.

SOME FALCON PLAYERS TO WATCH:

Payne Stolsworth  –Junior QB (6-3, 180).  Took over three games into the season last year and responded with over 2,000 yards passing and 25 TD passes. Now has the experience to go with the ability.

Brandon Wallace – Senior LB/SS (5-10, 165). Wallace moves over from strong safety this season after being second leading tackler last year with close to 100 tackles.

Martavio Rankin – Senior, RB, (5-9 205). A bruising runner who led the team with 305 yards and five TDs last year. He burned East Rowan for 122 yards and three scores in his best outing.